10 Things To Do And See In Gowanus, Brooklyn 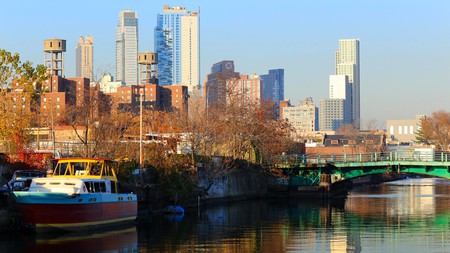 Despite being nestled between two brownstone neighborhoods, Gowanus still maintains that old-school industrial grit — perhaps a thanks to its stubbornly contaminated canal, which legend has it was once a mafia murder victim dumping ground. Sure, gentrification is in process here, but it’s also one of the last strongholds for NYC’s artists, artisans and specialist creators of every creed. Culture Trip scouted the ten coolest classes, spectacles and hangouts to pass the time along this quirky waterway.

Rent a bike from 718 Cyclery

Store
Facebook
Email
Twitter
Pinterest
Copy link
Share
Bikes are big in Brooklyn and just happen to be the perfect mode of transport to explore Gowanus and the surrounding neighborhoods. Stop by 718 Cyclery — a community-orientated peddle hub offering free maintenance classes, camping adventures and ‘collaborative builds’ — and rent a bike for $25 per day. The fee includes a helmet, but don’t forget to bring your own lock — you don’t want your weekend wheels to end up on NYC’s thriving bicycle black market.

Cruise along the water to the marvelously named Batcave — a derelict eight-story high remnant of Gowanus’ past as the busiest commercial canal in the country. Once upon a time, it was home to the Brooklyn Rapid Transit Power House, but in recent years has played host to squatters, junkies, graffiti artists, impromptu punk rock concerts, music video shoots, art film sets and illegal raves. Urban decay enthusiasts should see this landmark now because plans are underway to gut the building and turn it into a shiny new arts center.

The industrial factories that fringe the canal are home to a diverse population of artists, many of whom open their studios and their tool kits to the public.

From bead-making to the fundamentals of neon, Brooklyn Glass offers some awesome classes for beginners. Every couple of months, the venue hosts ‘Hot Glass, Cold Beer’ — an opportunity to see the resident glassworkers in action while you sip bottomless beers from your own handmade drinking vessel.

Haven’t picked up a paintbrush since school? Get yourself down to Trestle, which offers community classes covering a wide range of art techniques and disciplines, including DIY screen printing, collage creation and life drawing practice.

Twig — a terrariums business that started out at Brooklyn Flea and is now a firm favorite of the interior design world — regularly hosts workshops on cultivating these tiny ecosystems. First create a mini-scape using moss, plants, and succulents and then bring it to life with teeny, evocative figurines.

If you have a fascination with the macabre, the collection of creepy little oddities at the Morbid Anatomy Museum will be right up your street. Starting this October, the House of Wax exhibit showcases a collection of anatomical and pathological waxworks; real human specimens; death masks of celebrities and murderers; ethnographic busts and more — all guaranteed to pique your dormant dark side. It opens October 23rd with complimentary wine, cocktails, and a talk by curator Ryan Matthew Cohn.

Keep an eye on the museum’s events calendar too, which features lectures, live music acts and even taxidermy classes for those with a steady hand and a strong stomach. 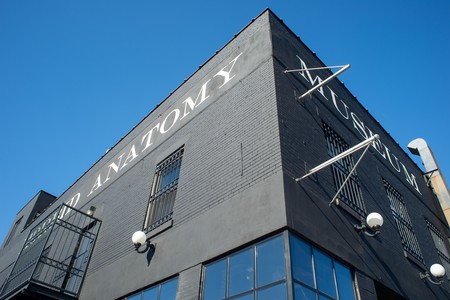 Go back to school with the Secret Science Club

School
Facebook
Email
Twitter
Pinterest
Copy link
Share
If the lines for these engrossing monthly talks at The Bell House are anything to go by, the secret is most definitely out. Hear renowned and award-winning experts wax lyrical about their specialist subjects — from philosophy to cosmology — in a stripped-down fashion that even a layperson can comprehend. Just be sure to get there an hour early if you want a seat — by 8pm, hipsters swarm the venue, ready to geek-out with a boozy beverage or two. 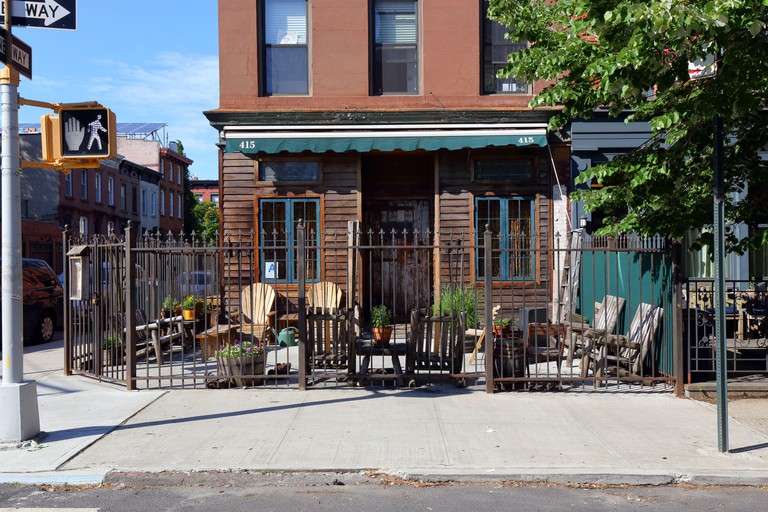 Black Mountain Wine House | © Robert K. Chin - Storefronts / Alamy Stock Photo
On the corner of a quiet residential block, away from the buzz of nearby Smith Street, is an inconspicuous wooden-fronted rustic cabin. You’ve just stumbled across Black Mountain Wine House — the coziest place to hunker down in front of an open fire. Order something from the 30-strong, meticulously curated wine list and graze on tasty small plates (you really can’t go wrong with cheese and charcuterie).

Have a pint on the patio at Lavender Lake

Bar, American, $$$
Facebook
Email
Twitter
Pinterest
Copy link
Share
Lavender Lake was a horse stable in a past life, but now it’s a cool canal-side bar with a menu that hits the spot after you’ve indulged in several of their namesake cocktails (lavender-infused vodka, iced tea and piquant lemon). The owners previously worked in design-related fields, which explains the trendy wood and metal décor, not to mention the pièce de résistance — a 1,600-square-foot outdoor patio that comes into its own during the city’s steamy summer afternoons.

Dine then dance at Threes Brewing 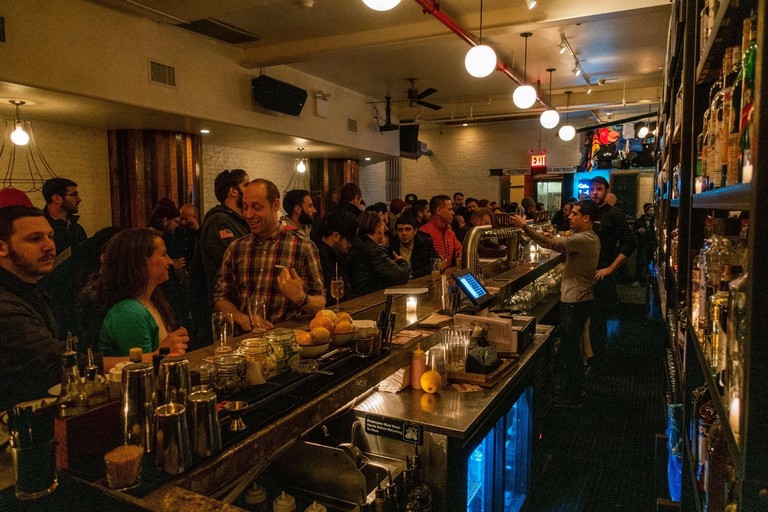 Threes Brewing | © Randy Duchaine / Alamy Stock Photo
A craft brewery, hip bar, events space, and pop-up restaurant all rolled into one? Threes Brewing is about the most quintessentially Brooklyn scene you can imagine. October’s resident chefs hail from the East Village restaurant Northern Spy, so you should expect a menu that’s locally grown, raised, caught, and crafted. Savor your meal with a side of whatever the nightly entertainment is — from stand-up comedy and poetry readings to musicians and DJs.

Get your shuffle on at Royal Palms 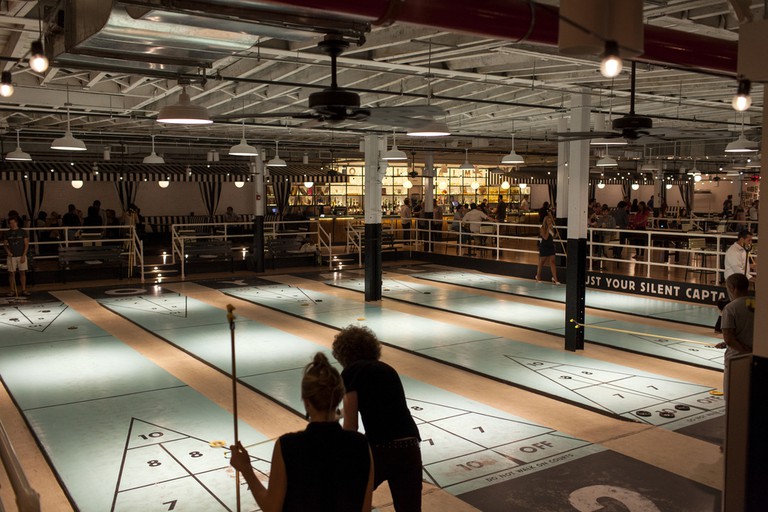 The Royal Palms Shuffleboard Club, New York | Courtesy of Royal Palms Shuffleboard
For those nights when you need a break from the classic NYC pastime of sitting, drinking and feasting, Royal Palms Shuffleboard Club is at your disposal. This spacious venue has perfected that ironic kitsch vibe, complete with fuchsia flamingo wallpaper, cocktails in mason jars, Hawaiian shirt-clad bartenders, and, of course, 10 full-size shuffleboard courts that look like they’ve been implanted from a Florida retirement home. All the cool kids love it! There’s even a slot for the Brooklyn food truck du jour to park and serve late-night nibbles to tipsy players.

Music Venue
Facebook
Email
Twitter
Pinterest
Copy link
Share
ShapeShifter Lab exemplifies Brooklyn’s love affair with hybrid venues. A performance space, art gallery, and recording studio rolled into one, it’s carved out a niche as one of the borough’s top spots to hear jazz and world beats. On Oct 30th, catch Adam Smale’s TYRAMID — a contemporary jazz trio that draws heavily on influences from the ‘60s and ’70s.
Give us feedback