'The Plague' is Somehow Having a Resurgence in New Mexico 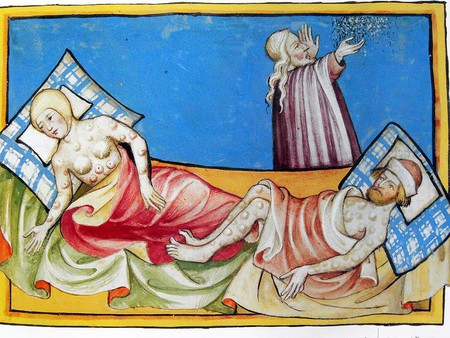 Miniature out of the Toggenburg Bible | Public Domain/Wikimedia

In the 1300s, the plague, also known as “the black death,” killed about 50 million people. But with two new cases in New Mexico, people are both afraid and scratching their heads. How are people contracting the plague in 2017?

“When you use the terminology ‘plague,’ it has a lot of charged aspects to it mainly because of historical issues, mainly the bubonic and pneumonic plague of the 14th Century,” Anthony Fauci, head of the National Institute of Allergy and Infectious Diseases at the National Institute of Health, told USA Today. “The plague was caused by the bacteria Yersinia pestis, which is still very much alive and well around the world and generally seen in animal populations, and transmitted by the bite of a flea.”

On Monday, New Mexico health officials confirmed three cases of the plague in Santa Fe County. Rodents, dead animals, and fleas can transmit the plague to humans. But in 2015 there were only about 320 cases of the plague worldwide, which is a vast difference from what was going on in Medieval Europe. Still, it’s not something we should necessarily be concerned about. Most of the cases in Medieval times were caused by poor sanitation — something that really isn’t as much an issue in America.

Still, be vigilant. Check yourself and your pets for ticks and fleas. And you’ll probably be just fine.

“Pets that are allowed to roam and hunt can bring infected fleas from dead rodents back into the home, putting you and your children at risk,” Dr. Paul Ettestad, a public health veterinarian for the New Mexico Department of Health, said in a statement. “Keeping your pets at home or on a leash and using an appropriate flea control product is important to protect you and your family.”