The Best Margaritas to Try On Santa Fe’s Margarita Trail 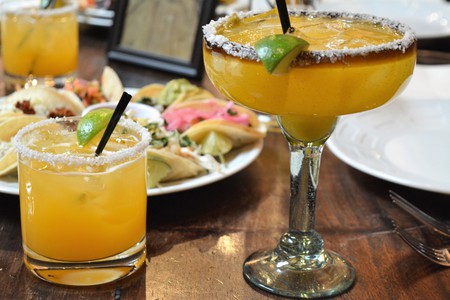 Tequila is a spirit that’s been enjoyed for centuries, and Santa Fe was the first city in the New World to import tequila from Mexico. As the main ingredient in a margarita is tequila, it’s only fitting that Santa Fe has its own Margarita Trail. Featuring 31 margaritas around the city, the Santa Fe Margarita Trail guides people to local restaurants, bars, and more for the city’s top margs. In honor of National Tequila Day on July 24, here are 10 of the top margaritas to try along Santa Fe’s Margarita Trail.

Where to drink on the Santa Fe Margarita Trail 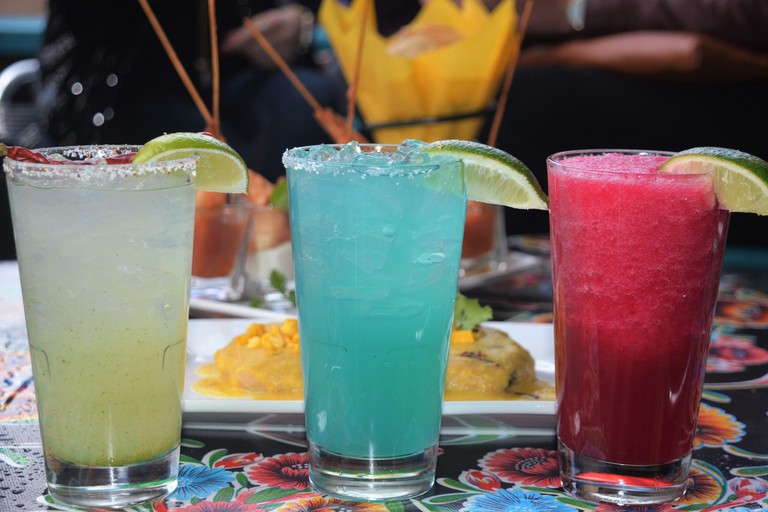 Vibrant turquoise seating, artwork, and accents make Coyote Rooftop Cantina special, but its Norteño Margarita puts things over the top. Made with hatch-chile-infused tequila, the Norteño is spicy and best enjoyed outside with a breeze while watching the street scene below.

Known as a Santa Fe landmark, Santacafé has been serving guests since 1983. Its Chipotle Margarita has a splash of pineapple juice in it, making for refreshing sips after tasting hints of chipotle. Try one under Santacafé’s covered courtyard for some of the best people-watching in the city.

Open for more than 60 years, The Shed serves up top-notch New Mexican dishes behind Prince Patio, an adobe hacienda that dates back to 1692. The Roca Coin Margarita, made with Roca Patrón Silver tequila and Cointreau, goes great paired with The Shed’s famous red chile enchiladas, made with blue corn tortillas.

La Fiesta Lounge at La Fonda on the Plaza 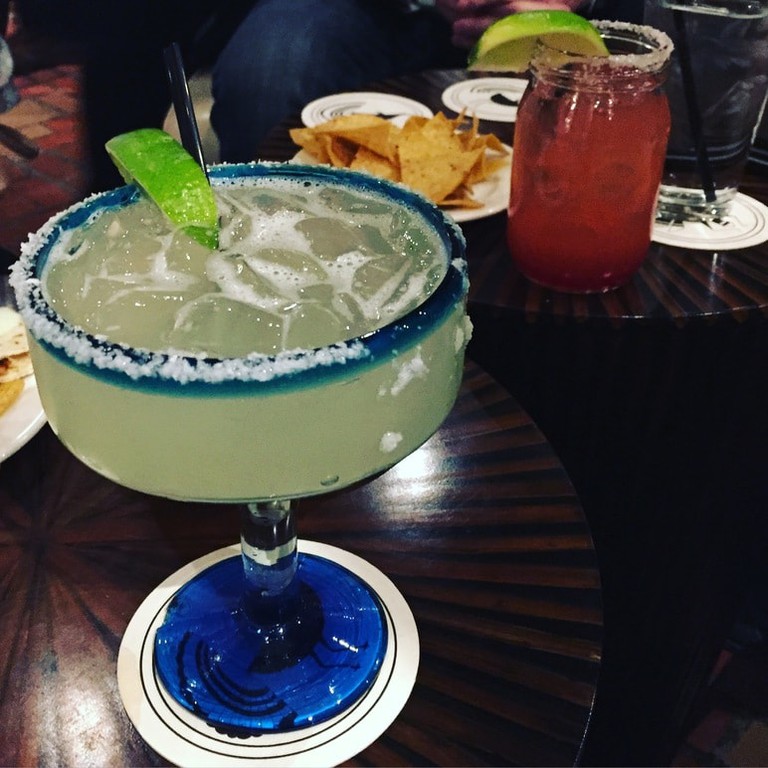 Tucked inside the historic La Fonda on the Plaza hotel, La Fiesta Lounge is where locals and visitors unwind with cocktails and conversation. The Don Rael Margarita was named by the hotel’s mixologist after himself. Be careful with this margarita, as it’s pretty boozy and made with Sauza Hornitos Reposado and Sauza Hornitos Añejo tequila, Grand Marnier, and Patrón Citrónge along with special lemon-lime juice. Pair it with the house-made guacamole and tortilla chips to absorb some of that alcohol.

You can’t leave without trying a margarita from Maria’s, which has been in business for more than 60 years. The New Mexican food is great, but the list of over 180 100% agave margaritas is monumental. 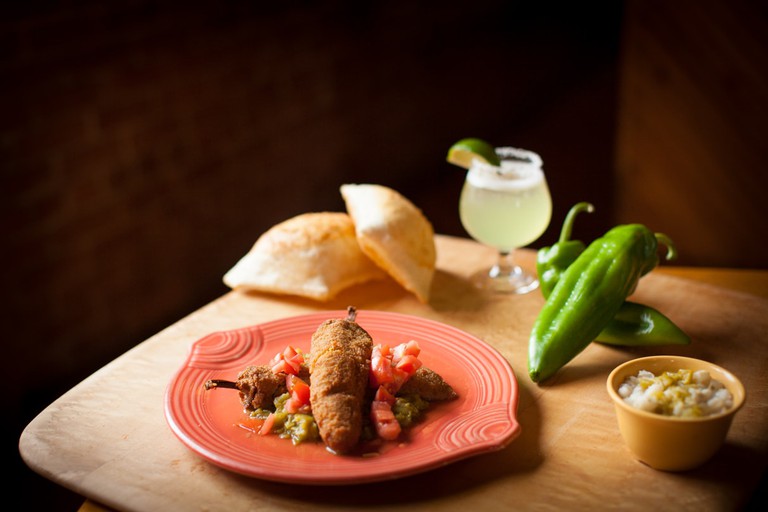 Rancho de Chimayó has been a staple in Sante Fe for more than 50 years, and its food is classic New Mexican done right. The Prickly Pear Margarita is a fun one to try along the trail, as it’s not only delicious, but pink.

Bell Ringer Margarita, The Bell Tower at La Fonda on the Plaza 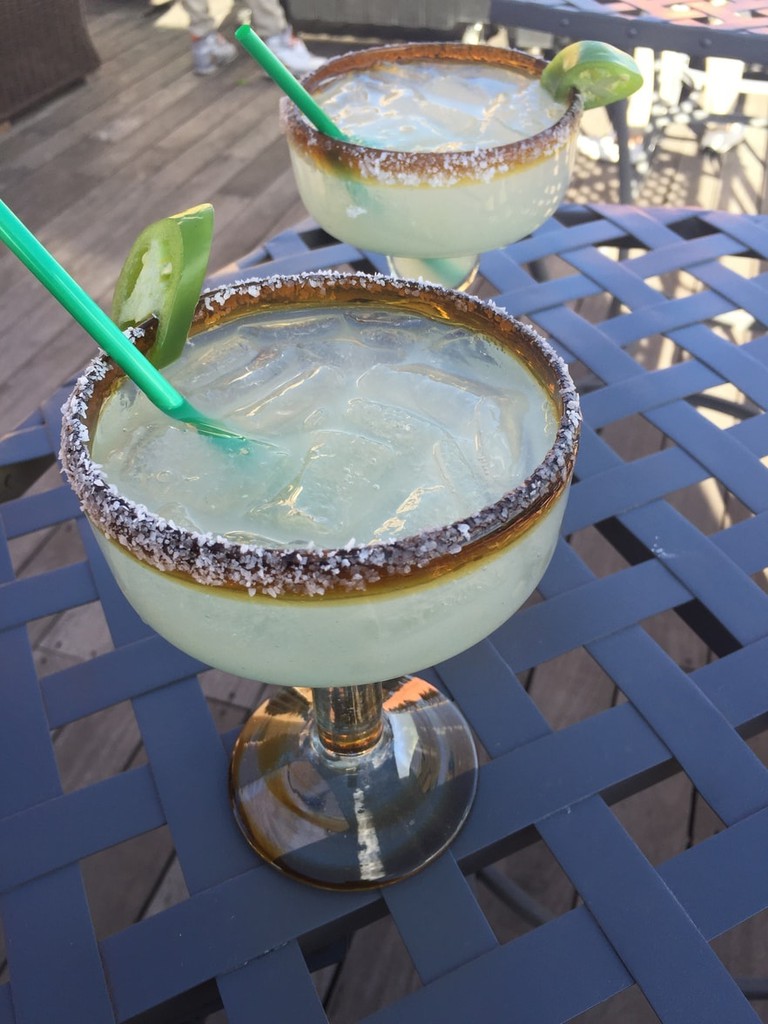 Back at La Fonda on the Plaza, head up to the rooftop Bell Tower bar for some of the best views of the surrounding city and mountains. The Bell Ringer Margarita is great to sip while watching the sunset, and is made with Tanteo jalapeño tequila, Cointreau, and a splash of jalapeño juice. The hotel’s special lemon-lime juice mellows things down, so it’s not overly spicy but still gives a touch of heat and a peppery aroma. The Bell Tower is open seasonally, so it’s best to save this cocktail for warm weather.

A great place for casual dining, Blue Corn Cafe serves traditional New Mexican, American, and pub fare along with margaritas and craft beer. Try the Peso de Plata margarita on the patio with the green-chile-cheeseburger or fry-bread taco. 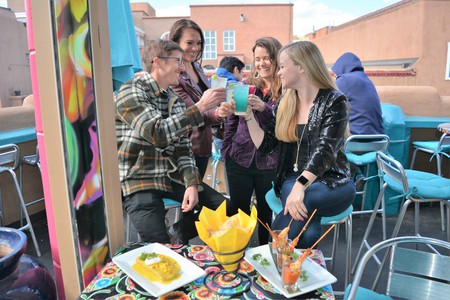 Where to stay on the Santa Fe Margarita Trail

La Fonda on the Plaza 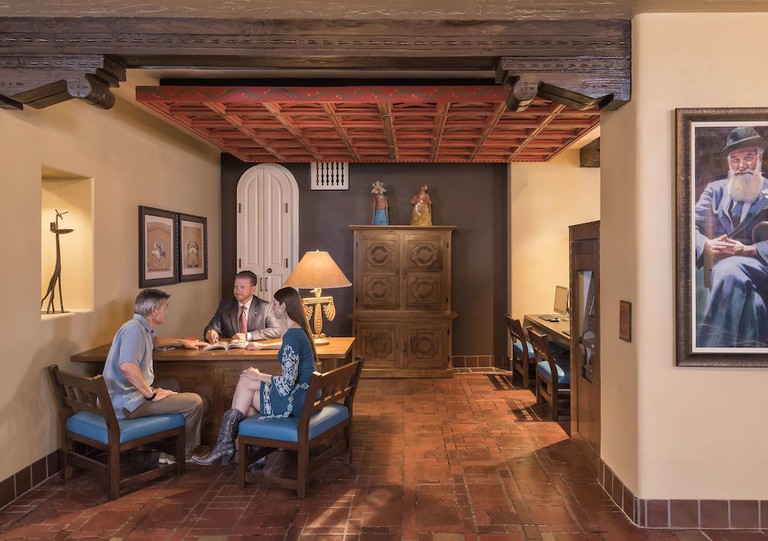 Courtesy of La Fonda on the Plaza / Expedia
View Rooms
A great place to relax after a long day of drinking in Santa Fe is La Fonda on the Plaza, which actually offers three different margaritas along the Margarita Trail. Known as the “living room of Santa Fe,” locals love to visit the lounge and congregate in the lobby just like travelers. La Fonda has the distinction of being on the oldest hotel corner in America. For more than 400 years, an inn of some kind has sat on the corner where La Fonda stands, and the hotel itself has an almost-100-year history. The hotel also has a special Margarita Trail package called “Book, Lime, and Shaker,” which includes accommodations for two at La Fonda, breakfast for two in La Plazuela—the hotel’s signature restaurant—two passports for the Santa Fe Margarita Trail, two La Fonda tequila shooter glasses, and The Great Margarita Book, a recipe book for margaritas.
More info

Start your journey by downloading the Santa Fe Margarita Trail app before arriving in Santa Fe, so when you arrive you’re ready to hit the trail. Purchase the Margarita Trail passport book ($3) at any participating bar or restaurant or any of the three Tourism Santa Fe visitor centers. Earn a stamp at each location for trying their signature margarita, and get $1 off each signature margarita you try when you present your passport for a stamp. There is a maximum of two stamps per day to promote responsible drinking. As you collect stamps, you earn rewards like a Margarita Trail T-shirt, membership into the Margarita Society, a copy of The Great Margarita, and a margarita bartender kit.