The 10 Most Beautiful Towns In New Mexico, USA

From simply stunning mountain communities like Taos, to quirky desert towns like Truth or Consequences, New Mexico has some of the USA’s most scenic spots. We showcase the most beautiful places in ‘The Land of Enchantment’.
El Santuario de Chimayó, Chimayó © William Aranda/WikiCommons

Nestled in the foothills of New Mexico’s stunning Sangre de Cristo Mountains just a short drive north of Santa Fe is Chimayó – a tiny community originally founded by Spanish settlers in the late 17th century. Recently listed among Budget Travel’s Most Beautiful Towns in the World, Chimayó is a town with roots in spirituality. The beautiful El Santuario de Chimayó, a shrine and National Historic Landmark, marks the spot where a miraculous healing is said to have taken place 200 years ago. The peaceful community is also known for its traditional weaving – examples of which can be found at a number of stores and galleries in town – and is the home of the Chimayó Heirloom chile.

A gorgeous town steeped in history and culture, Taos was named among the World’s Prettiest Mountain Towns by Travel and Leisure magazine. It is known for its scenic location in the Sangre de Cristo Mountains, beautiful historic architecture and art heritage. Since the early 20th century, artists including Ansel Adams and Georgia O’Keeffe have flocked to the town enchanted by its beauty. With organizations like Taos Art Museum alongside regular arts and crafts fairs, Taos remains an artists’ haven today. Just outside the town is Taos Pueblo – an adobe pueblo structure and UNESCO World Heritage Site dating back 1,000 years – and the area’s four ski resorts make the town a popular base for skiing in wintertime.

Close to the border with Arizona is the charming community of Silver City, a town dubbed one of the USA’s 10 Coolest Small Towns by Budget Travel. As its name might suggest, Silver City was founded in the 1870s when miners flocked to take advantage of the area’s rich silver deposits. Its colorful Wild West heritage includes its status as the first town to arrest outlaw, Billy the Kid. Today, Silver City is a modern, bustling town with a burgeoning foodie scene – James Beard Best Chef semifinalist, Rob Connoley’s The Curious Kumquat restaurant is located there – and thriving arts scene in its historic downtown.

Located in the northern reaches of New Mexico’s beautiful Lincoln National Forrest, Cloudcroft is a tiny mountain community founded at the turn of the last century when the old El Paso and Northeastern Railway extended through the area. Though the last train passed through Cloudcroft in the 1940s, its railway town past can still be seen at the Trestle Recreation Area. Today the laid-back community attracts tourists in both the warmer months, when a number of fun events like the Bad Ass Mountain Music Festival and July Jamboree Arts and Crafts Show are held, and in winter for snow sports. 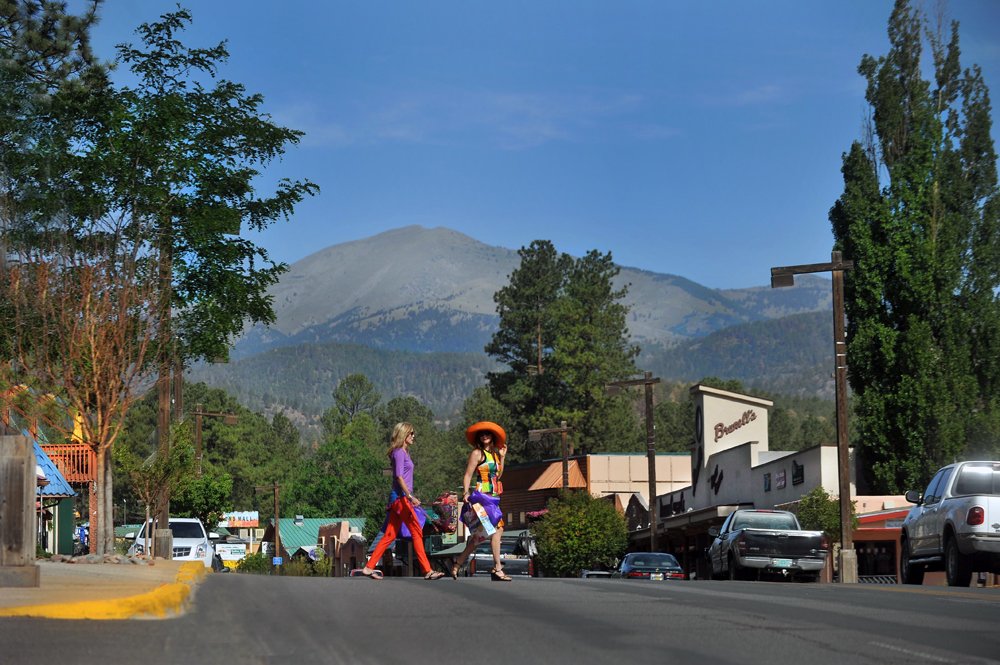 Just an hour or so drive north of Cloudcroft, amid the beautiful pines of southern New Mexico’s mountains is the charming town of Ruidoso. It is named after the beautiful Rio Ruidoso, which translates as ‘noisy river’, that runs through the town. Once a sleepy mountain town, Ruidoso is thriving and growing fast. Lovers of the great outdoors flock to the town to take advantage of the surrounding wilderness and hiking opportunities, while history buffs delight in the nearby Mescalero Apache Reservation’s preservation of nomadic Native American culture. A community of quaint shops and restaurants in town will keep also keep the cosmopolitan type entertained.

A small, quirky resort town located in southwest New Mexico, Truth or Consequences got its unusual name when in 1950 radio host Ralph Edwards dared a town to change its name to that of his popular game show. Affectionately referred to as ‘T or C’ for short, the town sits on the banks of the Rio Grande and the several hot springs dotted around the area have made it a popular spa resort. T or C’s quirks don’t end with its name – the town’s architecture is an eccentric mix of historic adobe bathhouses and Territorial Revival-style structures. Meanwhile, the nearby Elephant Butte Lake State Park offers plenty of recreational pursuits.

Once a coal boomtown turned flailing ghost town, Madrid – a tiny town of just 150 residents snuggled in a scenic canyon of the Ortiz Mountains – has revived itself in recent years, becoming a popular tourist destination. The Turquoise Trail National Scenic Byway, which connects Santa Fe and Albuquerque, runs through Madrid. The town is also famous for its lovely Christmas Lights Display, a tradition upheld since the 1920s. Arts fans love Madrid’s thriving community of art galleries and artisans, while the lively Mine Shaft Tavern serves up live music and its famous green chile hamburgers.

Located just 20 or so miles from the Colorado border, Aztec is a vibrant northwestern New Mexico community of almost 7,000 people that was founded in the late 19th century though Aztec’s history goes back much further. The land on which the town now lies, was traversed by the Dominguez-Escalante Expedition in 1776 and the Aztec Ruins National Monument dates back as early as the 12th century. Aztec’s historic downtown is home to some beautiful, more modern early 20th-century architecture. The Aztec Arches – a cluster of more than 300 natural sandstone arches – are a sight to behold for lovers of nature.

Not to be confused with the glitzy Nevada city of the same name, Las Vegas is a bustling northeastern New Mexico town steeped in colorful history. Founded in 1835, the Santa Fe Trail town is home to more than 900 buildings listed on National Register of Historic Places – including the stately Plaza Hotel built in 1881. In its Wild West heyday, it hosted outlaws like Billy the Kid and Wyatt Earp. Today, the town is a cultural hotspot home to a thriving cultural scene with art galleries, antique stores and events like the San Miguel County Fair and Meadow City Music Fest.

Situated to the west of Las Cruces, the lovely town of Mesilla has managed to retain its historic character and small town charm despite its proximity to New Mexico’s second biggest city. Its picturesque town square Mesilla Plaza is – a National Historic Landmark that dates back to the town’s founding in 1848. Today, it is home to historic structures like the beautiful Basilica of San Albino, alongside a cluster of craft stores and great restaurants. Mesilla’s lively cultural calendar include the annual Cinco de Mayo and Diez y Seis de Septiembre Fiestas which celebrate the town’s Mexican culture.