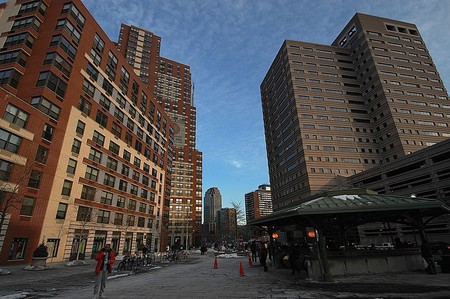 Jersey City may seem like a small city. However, with more than 260,000 residents, it’s one of the most densely populated in the state of New Jersey. And with its rich cultural diversity and how close it is to New York City, it has a character all its own. And that’s not limited to just the city but the neighborhoods throughout it.

Between the Grove Street Path Station and the Newark Avenue Pedestrian Mall, Downtown Jersey City has become the epicenter of Jersey City’s nightlife. This neighborhood quickly grew since it was easy for Jersey City locals to get to New York City and vice versa. But what solidified it as a cool Jersey City neighborhood is the variety of local businesses that sprung up in the past few years.

Whether it’s longstanding shops like Morlees or newer stores such as Mint Market, locals and visitors can do a good amount of shopping in the area. And, of course, there’s no shortage of places to eat and drink. Whether it’s the vegetarian-friendly Pet Shop, which has PS Wine Bar downstairs, or the BYOB Portuguese tapas place called Broa, visitors and locals can enjoy many culinary delights. And for anyone wanting to grab one more before the last call, they can stop by Dullboy or The Archer for a cocktail or Departed Soles for a craft beer. 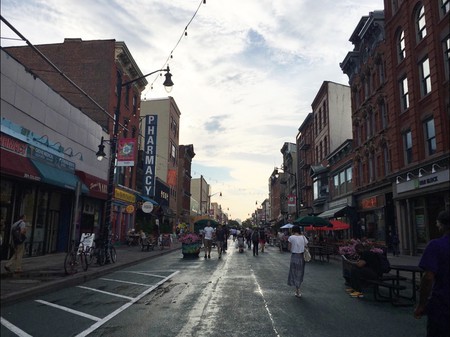 Aside from being in the northern part of Jersey City, The Heights got its name from the fact that most of the neighborhood lies on the Palisades. The Jersey City neighborhood, which covers a large part of the city, has a large Spanish-speaking population and a number of Puerto Rican and Cuban restaurants, such as Rumba’s Cafe, in the area, especially along Central Avenue. Closer to Palisades Avenue, there are more trendy locations like local roaster Modcup and the veggie-friendly café, The Cliff. The Fox & Crow Pub and Parlour serves numerous craft beers, gourmet burgers and puts on concerts in the back practically on a weekly basis.

While Jersey City is close to New York City, you can really only see it from a couple of places. Paulis Hook is one of those areas. Although some may see it as the typical manicured family-friendly area, the sights, as well as food and drink scene, make it a stellar Jersey City neighborhood. Anyone who lives in the area has a grand view of the Big Apple every morning. And if they take the path along the Hudson River, the walk or run will lead people to the historic Colgate Clock, one of Jersey City’s major fixtures.

Washington Street has a variety of restaurants and bars, notably the Light Horse Tavern. And if you feel like having more than bar food, grab a meal at Sky Thai. Mornings bring crowds to Sam A.M., a small breakfast and lunch restaurant. Just a little warning if you plan to go there on the weekends: waits can be as long as an hour or two. And yes, people do wait.

Bergen-Lafayette was an area that many have tried to avoid for years, mainly because it wasn’t the safest of neighborhoods. However, as Downtown Jersey City became more crowded, more people started to move south and toward Bergen-Lafayette. And soon after, more small food spots began to pop up, making it a great place to get a good meal.

For example, stop by The Grind Shop for a steaming cup of coffee and delicious granola. The Oak on Pine offers Southern comfort food like crawfish mac and cheese, Nashville-style hot chicken, and shoestring fries made to order. Harry’s Daughter is an ideal place for a romantic meal or a quick nightcap. And there’s also a Pinwheel Garden Dumpling & Noodle Bar, which is an excellent place to get some tea and dumplings. And as this Jersey City neighborhood continues to develop, everyone is sure to see more.

Journal Square was once the center of Jersey City. As it’s one of the largest stops for the PATH train, it was where many people traveled to in order to get to New York City, Newark, and Hoboken. It’s also home to many historical landmarks, including the famous Jackie Robinson statue as well as the grand Landmark Loew’s Theatre, which hosts film screenings and concerts.

A few blocks from the center of Journal Square, you can visit Little India for an authentic meal. Or you can walk up Newark in the opposite direction and grab some Filipino food at either Max’s or Red Ribbon Bakeshop. Although Journal Square may not be as fancy as other parts of the city, its longtime history makes it one great Jersey City neighborhood.