The 10 Most Beautiful Cathedrals and Churches in Northern New Jersey 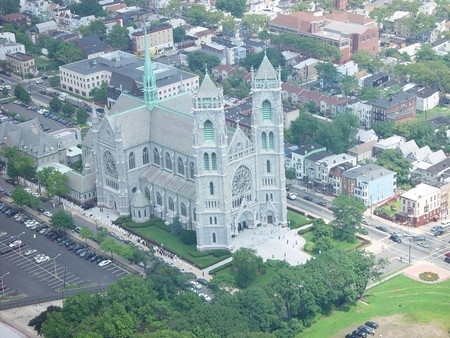 Aerial view of the Cathedral Basilica of the Sacred Heart in Newark, NJ. | © Archdiocese of Newark

After Henry Hudson sailed through the Newark Bay in 1609, trading colonies started to spring up in what we now know as New Jersey, making it one of the older states in America. As more people settled in the Garden State, their cultures and beliefs came with them – resulting in some of the country’s most beautiful churches and cathedrals. Here’s our pick of the best.

The Cathedral Basilica of the Sacred Heart, Newark

The Cathedral Basilica of the Sacred Heart in Newark, NJ, is the fifth-largest cathedral in North America. It is also where the Roman Catholic Archdiocese of Newark is located. Construction started on 1899 and was completed in 1954. During the construction period, the design changed from English-Irish Gothic Revival to French Gothic Revival. Since its completion, the New Jersey Historical Society named it a historic landmark in 1974 and it was designated a National Historic Site on December 22, 1976. 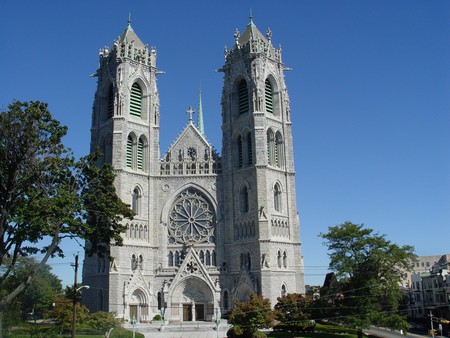 The Cathedral Basilica of the Sacred Heart in Newark, NJ. | © Archdiocese of Newark

Known as the “Old Church on the Green,” the First Reformed Dutch Church was built in 1791. It is the oldest church in Bergen County and one of the oldest churches in New Jersey. Located in Hackensack, NJ, it was renovated in 1847 and then “rebuilt” in 1869. Colonial General Enoch Poor, who served under George Washington, was buried in the cemetery behind the church. Washington, General Gilbert du Motier, Marquis de Lafayette and some members of the American army attended Poor’s funeral held inside the church.

While Saints Peter and Paul Church has been home to many Orthodox Christians in northeastern New Jersey, the location of the building has actually moved around quite a bit in Jersey City. Currently located on 109 Grand Street, the church’s beauty fully comes through inside the building. From the wooden pews to the religious images painted on the walls, you can’t help but respect the sacredness of the religion and the congregation’s place of worship.

It was good to be home today. #orthodox #orthodoxy #parishlife #jerseycity

Although the Grace Church Van Vorst was built in 1853 and has the traditional English Gothic style, walking into the building proves it went through various changes over the years. Designed by the German-born architect Detlef Lienau, the Episcopal church was located in Downtown Jersey City. With more than 50 years of leadership, Right Reverend Paul Moore, Jr. not only helped with the church’s growth but also uplifted the poorer communities in the neighborhood.

No days off for these hardworking dancers! We just got back from an amazing tour to Putney, Vermont and are ready to get into our BAM season! Today’s rehearsal space at the gorgeous space at the Grace Church in Jersey City rehearsing our world premiere piece ‘Esther’ with the amazingly talented @skypony1

St. Lucy’s Church was founded in 1891 and was the second Italian parish in Newark, NJ. Although the original wooden church was erected that year, the one that stands today is much younger and was built between 1925 and 1926. But like the original building, this one was dedicated on December 13, the feast day of St. Lucy of Syracuse. Because of the “special relationship” St. Lucy’s has with St. Gerard Majella, the National Conference of U.S. Bishops made St. Lucy’s the national shrine of St. Gerard in 1977.

Although St. Bernard’s Church was founded on 1896, the actual church didn’t open its doors in Bernardsville, NJ, until June 29, 1898. The Episcopal church takes on a Victorian adaptation of Baroque and Gothic style. There is also British stain glass designer Charles Eamer Kempe’s crafted window of St. Bernard hanging inside the church. While it not might be the biggest of churches, the mosaic combinations of Cahn stones give the building a beautiful and rustic look that has stood the test of time for almost two centuries.

The Episcopals always get the prettiest churches. || #churchesofinstagram #newjersey #church

The Calvary Episcopal Church is special to the local community because of the history that stands behind the New Jersey church. Initially built in 1854, the church was expanded in 1872. Then when an accidental fire enveloped the building, the congregation worked toward building a new church in 1894 on Woodland and DeForest Avenues in Summit, NJ, which is where it stands today. Between the mosaic of rocks that cover the outer shell to the rose-shaped stained glass, this is one beautiful piece of architecture.

The colors of this window change with the day. A beautiful place to come and reflect. All are welcome. #episcopal #tiffanystainedglass #holyweek #eveningprayer 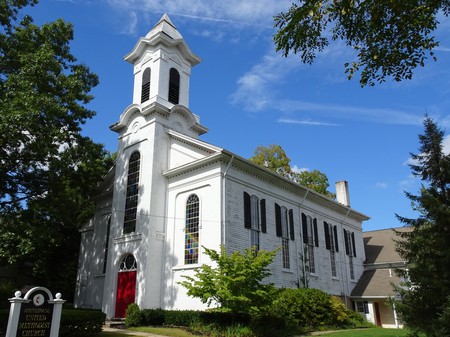 Despite its legal issues, the Alpine Community Church is a beautiful structure that stands in Alpine, NJ. Built in 1841, the tall triangle at the top of the front wall makes the church stand out while driving on the road. And although the New Jersey church might look quaint, the interior is very spacious and makes you feel like you’ve stepped into a different time.

Heading into Central New Jersey territory, Saints Peter and Paul Orthodox Church was a community effort throughout the years. From the moment construction started in 1905, members of the congregation donated funds, materials and time to build the South River church. The arched windows and prominent domes give the building lots of character and add charm to the neighborhood. 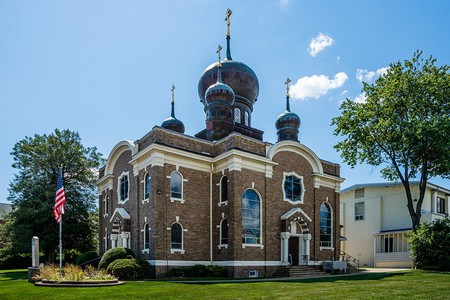