Spectacular Castles and Mansions to Visit in New Jersey 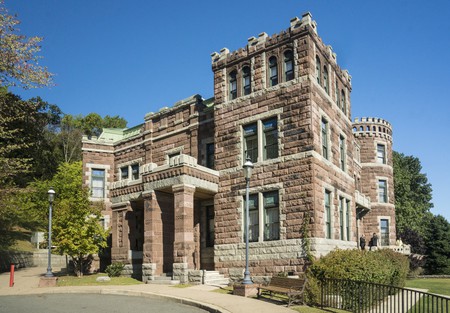 The Garden State is filled with castles and mansions that were once residences for the wealthy. Now many are museums or homes to other businesses and organizations, but these structures have plenty of history and beauty that make them just as exciting for visitors as they were in their prime. Here are the must-see castles and mansions in New Jersey.

Constructed in 1892–1893, the Lambert Castle was created in Paterson, New Jersey, by Catholina Lambert. The English immigrant named it “Belle Vista,” and prominent people, including President William McKinley, visited the castle. After Lambert’s passing, his son sold the castle to the City of Paterson. Then in 1934, it was transferred to the Parks Commission, and the Passaic County Historical Society established a museum and library. In 1976, the building was awarded the Castle Landmark Designation, and in 1995, it underwent a $5 million restoration project.

This weekend we visited Lambert Castle in Paterson. Such a beautiful structure, and one more item checked off our Summer Bucket List. All the details are up on the blog!

Now a part of Kean University, Liberty Hall was built in 1772 in Elizabethtown, New Jersey, by lawyer William Livingston. He and his family moved to the home full-time after he retired; however, he came out of retirement and went on to serve in the First and Second Continental Congress and as brigadier general of the New Jersey militia. Afterward, Livingston became the first elected governor of New Jersey. In 1811, Peter Kean purchased the building after Livingston’s death and transformed it into a 50-room mansion.

Spring has sprung (finally) at Liberty Hall Museum!! Swipe ➡️ for some more beautiful pictures of #LibertyHallMuseum in springtime and our gorgeous grounds and flowers in bloom! #springtime #whatsinbloom #flower #nofilter #historichousemuseum #njhistory

In 1922, horticulturist Clarence McKenzie Lewis purchased some land to create a regal home. Designed by the same architect as the Jefferson Memorial, Lewis’ home was lavish—filled with granite, Italian marble, pine and more. In 1953, Lewis sold the building and the land. New Jersey bought the property in 1966. Following the purchase, Skylands Manor became an official state garden; it now serves as a wedding venue.

The Emlen Physick Estate in Cape May, N.J.

Emlen Physick Jr., his widowed mother, Frances Ralston, and his aunt, Emilie Parmentier, moved into the Emlen Physick Estate after its completion in 1879. In the 1970s, the Mid-Atlantic Center for the Arts and Humanities saved and restored the 18-room home.

One of my favorite spots in Cape May - The Emlen Physick Estate. Growing up I used to take summer art lessons on the second floor of the stable. It is a museum now; they have preserved the building and grounds perfectly 🙌 🏡🖌💕

Amassing more than 1,000 acres in Peapack-Gladstone, Walter Graeme Ladd and his wife, Catherine (“Kate”) Everit Macy Ladd, created a 40-room Tudor-style mansion, completed in 1912. Named Natirar, an anagram for the Raritan River, the home is trimmed with limestone, filled with oak paneling and decorated with molded plaster ceilings. Following Mrs. Ladd’s death, Hassan II, the King of Morocco, bought the property; he died in 1999. Then in 2003, Somerset County purchased the estate and transformed it into a cooking school, a farm, restaurant and more.

Now the official residence of the Governor of New Jersey, Drumthwacket was built by Charles Smith Olden in 1835. The estate is also home to the office of the Drumthwacket Foundation and acts as an educational center for children.

Drumthwacket (built 1835) The official residence of the Governor of New Jersey sits in Princeton. The house was the private residence of three owners, Charles Smith Olden, Moses Taylor Pyne, and Abram Spanel, before being purchased by the State of New Jersey in 1966. Drumthwacket is open most Wednesdays at 1 pm for guided public tours! It’s an exquisitely grand space.

Building
Facebook
Email
Twitter
Pinterest
Copy link
Share
Map View
Alnwick Hall was created for Edward and Rosaline Meany. One of the homes on “Millionaires’ Row” and a relic of Gilded Age extravagance, the 32-room castle dates back to 1904.

Built in 1917 and now a private residence, Glynallyn Castle was the home of publisher George Marshall Allen. Modeled after the post-medieval manor house at Compton Wynyates in Warwickshire, England, this home was fitted with historic features including 400-year-old oak paneling and interior pieces salvaged from English mansions.

Lloyd W. Tomkins created the Iviswold Castle in 1869. Not long after, in 1887, David Brinkerhoff Ivison, president of the American Book Company, bought the property, turning it into the present-day castle-like structure. Before Felician University acquired the castle in 1997, it was administrative offices for Fairleigh Dickinson University.