Atlantic City has a stellar collection of fine dining establishments. Restaurants dating back to before prohibition are still going strong and are now rightly regarded as local institutions, while a handful of newer additions to the boardwalk offer diners a masterclass in culinary excellence. We list the 10 best restaurants in New Jersey’s Atlantic City. 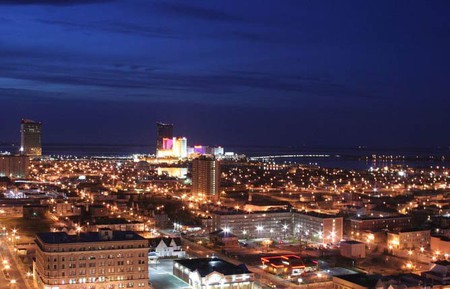 Restaurant, Chinese, Asian, Vegetarian, $$$
Facebook
Email
Twitter
Pinterest
Copy link
Share
To dine at Buddakan is to find oneself in a courtyard which resembles that of an ancient Chinese village. The walk into the restaurant through archways, past trees which seem to disappear into the ceiling and over intricate foot bridges, all contributes to the impressive effect. Buddakan is more than just an exemplar in interior design; award-winning chefs work in the kitchens to produce delicacies such as wasabi-crusted filet mignon with sweet potato mash, while master patissiers produce desserts of dark chocolate fondant with roasted sour cherries and pistachio ice cream.

Cafe, Restaurant, Bar, Italian, $$$
Facebook
Email
Twitter
Pinterest
Copy link
Share
Café 2825 is run by the Lautato family with a distinctive streak of Italian hospitality extending from the kitchen to each individual customer. Run by the family for over half a century, Café 2825 has made an art form out of northern Italian cooking. The house specialities include oven baked clams filled with seasoned Italian bread crumbs and romano cheese, fried calamari, eggplant rollatini and pesto marinated shrimp. With a wine list ranging from the old and new world, the interplay of intense flavors at Café 2825 offers a superb dining experience.

Restaurant, Italian, $$$
Facebook
Email
Twitter
Pinterest
Copy link
Share
It is notoriously difficult to get a reservation at Chef Vola’s, a restaurant serving up high-quality Italian food. While it may take months to secure a table, popular lore confirms it is definitely worth the wait. Fine dining in an intimate setting, Chef Vola’s serves its guests traditional Italian fare cooked with knowing and flair. The fresh pasta dishes, veal cutlets and chocolate ricotta cheesecake are all fantastic. Guests are allowed to bring their own wine, so take your time choosing something fitting for the occasion.

Restaurant, American, Seafood, Vegetarian, $$$
Facebook
Email
Twitter
Pinterest
Copy link
Share
Dock’s was opened at the turn of the 20th century by Harry ‘call me Dock’ Dougherty and is now managed by a fourth generation Dougherty. The restaurant has stayed in the family and, more pertinently, stayed in business through two world wars and the variety of economic upturns and downturns in Atlantic City. While the interior of Dock’s may have changed over the decades, the spirit of the place has not and it remains one of the finest places in town for premium seafood and steaks. A classic on the menu is the beef and reef, a filet mignon served up alongside broiled coldwater lobster tail.

The Atlantic City Bottle Company offers only the finest quality ales, wines, and spirits to patrons. The Iron Room is the space where the vast array of drinks are paired with dishes ranging in size from a bowl of cerignola olives and a plate of goat’s cheese and scallion croquettes, to the gargantuan chef’s board of meats, cheeses and fish. For visitors who wish to learn about the art of tasting, the bottle company offers classes specifically designed to develop the palate where beer, cheese, wine and whiskey are concerned.
The Iron Room, 648 North Albany Avenue, Atlantic City, NJ, USA, +1 609 348 6400

Restaurant, Steakhouse, $$$
Facebook
Email
Twitter
Pinterest
Copy link
Share
Established in 1912 by the then mayor of Atlantic City, the Knife & Fork Inn has gone through a series of changes as it has adapted with the times. At one time a drinking and dining club exclusively for men, during the prohibition, the Inn was raided and had its stores ransacked by federal agents. A decade ago, the restaurant changed hands to the owners of Dock’s Oyster House, undergoing a major refurbishment to take it back to its prohibition era roots. With restored mahogany interiors and hand-painted ceilings, the Knife & Fork Inn is an opulent setting for an evening of fresh seafood and seared steaks.

Pub, Restaurant, Pub Grub, American, $$$
Facebook
Email
Twitter
Pinterest
Copy link
Share
The Tun Tavern has its roots in a Philadelphia brewhouse from the 17th Century, where it was a port of call for the likes of George Washington, Benjamin Franklin, and Thomas Jefferson. In its present day incarnation, the Tun is both a brewery and a first class restaurant. With beers brewed on the premises, the team at the Tun take the time to suggest the ideal pairings between their ales and their entrees: leatherneck stouts for the black angus steaks and Irish style red ales for orders of the ahi tuna wasabi.

Diner, Sandwich Shop, American, Fast Food, Vegetarian
Facebook
Email
Twitter
Pinterest
Copy link
Share
White House Sub Shop has been going strong since 1946, and is unanimously regarded as an Arctic Avenue institution. Family run from the early days, the sub shop has the reputation it deserves among regulars in Atlantic City. The walls above the diner booths are lined with photos dating back six decades, displaying those who have visited and revisited the sub shop. The diner’s popularity stems from the importance the staff place on service and high-quality subs. Whether on an order of meatball, pepper steak or turkey submarines, the White House Sub Shop delivers the goods every time.
Give us feedback