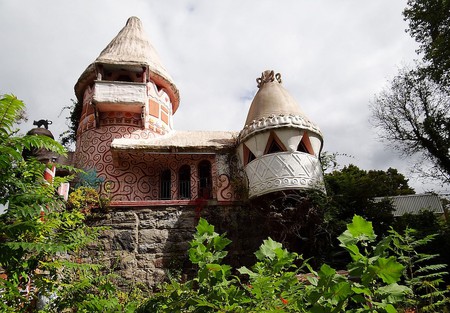 Every town has its fair share of famed oddities and eccentric attractions that continue to intrigue locals and visitors alike. For the small town of Hamburg, New Jersey, that attraction is none other than The Gingerbread Castle, a ruined and run-down old amusement park that’s still standing years after it was abandoned. Here, we take you on a tour of the dilapidated castle grounds.

In 1921, Fred Henry Bennet, a New Jersey resident and the owner of F.H. Bennet Biscuit Company and Wheatsworth Mill, decided to expand his small empire. In his efforts to grow the business after experiencing a drop in sales, Bennet purchased additional property on the surrounding land in hopes of increasing his earnings. The story goes that Bennet, who was fresh out of ideas on how to boost sales, saw a production of Hansel and Gretel at the Metropolitan Opera and was suddenly struck by a brilliant business plan. 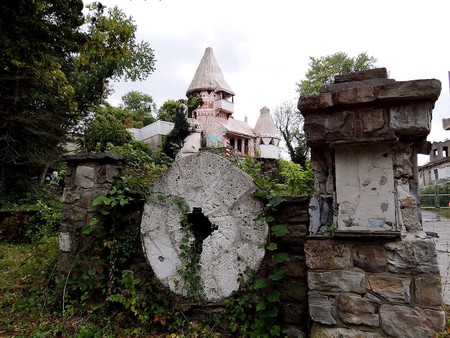 Already a fan of the Brothers Grimm collection of fairy tales, the businessman hoped to bring the same experience of whimsy and enchantment to children in New Jersey by constructing a real-life fairytale castle on his newly acquired property. In 1928, Bennet entrusted his plans with Austrian-born architect Joseph Urban, who was known for his elaborate, architectural designs and the set designer behind the Hansel and Gretel production that had inspired Bennet.

Sparing no expense, Bennet and Urban designed a real-world fairytale castle worthy of any storybook creature. In 1930, when the doors finally opened for children and families to visit, they called it the Gingerbread Castle.

It was described in a 1930 article by Time Magazine as “a poured-stone structure on the foundations of an old cement kiln” with a roof “decorated by a frieze of pink and blue imitation candy hearts” and walls adorned with “huge cookies (of cork).” Other striking details include “a six-foot painted knight in gaudy armor,” “a gigantic black cat,” “a trained seal on a barber’s pole,” as well as “pink elephants, rhinoceroses.” 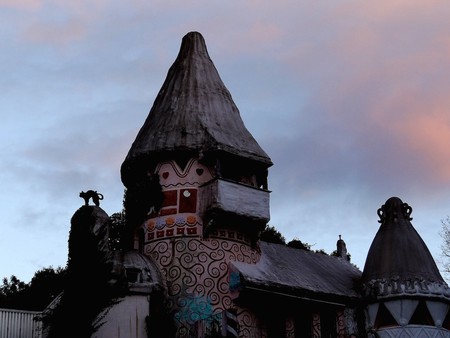 The article continues describing the castle, this time, with a strangely dark and eerie tone, saying, “The interior is even stranger, with carved witches and fairies, gnomes and children, a giant metal plum pudding, glass-eyed electric spiders that slither up and down on copper webs. To curdle young blood one room has a reproduction of the cauldron in which Jack’s giant made pot-av-feu of his victims before Jack slew him. The walls are studded with bones.”

Although The Gingerbread Castle proved to be a successful tourist attraction, it wasn’t enough to save Bennet’s business and closed in the early ’80s. Sometime in the late 1980s, the new owners attempted to reopen the theme park but closed it due to low attendance just a few years later. Throughout the years, its fate has been in the hands of several different developers who bought the property, but as it stands today, the Gingerbread Castle is still in ruins. 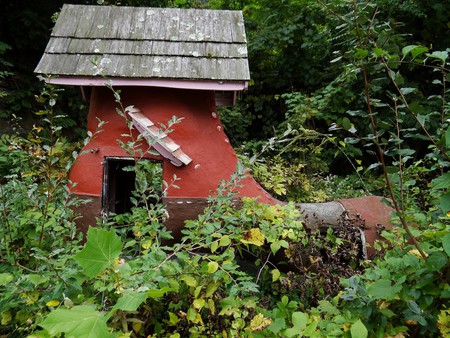 Today, you can drive down Gingerbread Castle Road in Hamburg to catch a glimpse of the dilapidated building. Heavily patrolled by police and surrounded by fences, visitors are no longer allowed inside. However, as you pass by, it is possible to see an old wishing well, Mother Hubbard’s shoe, or the remains of a crumbling Humpty Dumpty statue. Even in its ruins, it’s not hard to see the magic and wonder that was once there.