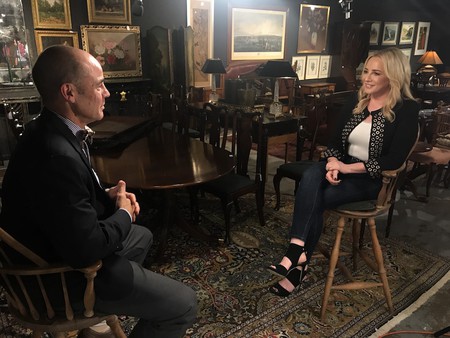 Jamie Colby has seen a fair few oddities in her day as the host of Strange Inheritance,a television series that explores the weird and wonderful histories of unusual family heirlooms. The latest episode follows Colby to Teaneck, New Jersey, where an unsightly portrait fetched a cool $1 million as a long-lost painting by 17th-century Dutch master, Rembrandt van Rijn.

When their mother died in 2010, the Landau brothers inherited her silver tea set and a series of rather nondescript paintings; landscapes, mainly, and a strange portrait depicting a fainted subject being revived by smelling salts. 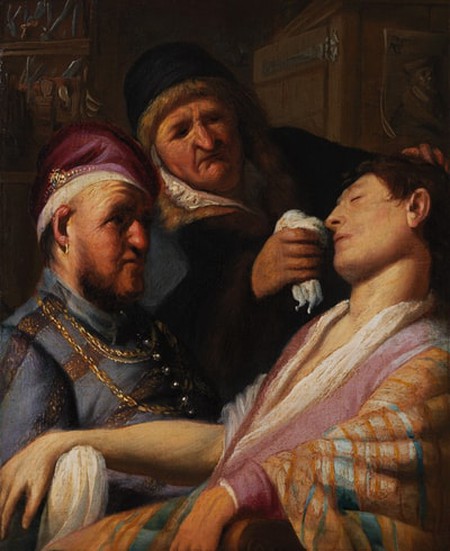 The artworks bore no significance to Ned, Roger, or Steven—in fact, they recall their shared childhood aversion to the unsettling portrait, which hung in their dining room when they were growing up. Serving no purpose other than to gather dust in the basement, the siblings called upon the services of local auctioneer John Nye, whom they hoped would shift the lot for a small profit. Nye took interest in the silver tea set, but not so much in the paintings.

Nye set a generous reserve of $500 for the portrait, which he called “remarkably unremarkable”—what with its cracked varnish, unattractive subjects, and unpleasant subject matter. But once the piece hit the auction block, the bidding became what Colby describes as “fast and furious.” Two anonymous phone bidders exponentially increased the price, and by the $50,000 mark, Nye realized that they knew something he didn’t. After the hammer fell at $1.1 million, it was revealed that the painting is the allegory of Smell in a series titled Five Senses by an 18-year-old Rembrandt.

“The paintings were created around 1624–5 when the artist was still a teenager, and depict the five senses—a popular allegorical theme of the day,” reported The Telegraph in September 2016 following the “sensational rediscovery” of The Unconscious Patient (Allegory of Smell). While Smell bears some characteristically Rembrandt-like detail, it’s not difficult to see why Nye initially mistook the piece for “a minor 19th-century painting by an unknown artist.”

The winning bidder, a European gallery owner, bought Smell “on spec,” Colby informed. The purchase proved a worthwhile risk, as Smell was restored and eventually authenticated at the Leiden Collection in New York. There, conservators officially attributed the painting to Rembrandt. But the real question is how Smell wound up with an unsuspecting family in New Jersey.

“[Their mother’s] father, the boys recall, would go into New York City on the weekends and attend auctions and scout galleries looking for bargains,” Colby explained, “but he never mentioned to anyone that he’d picked up a Rembrandt. To this day, the brothers have no idea if their grandfather or mother even knew what it was.” While Colby says that the painting’s provenance was “pristine from the time it came into the family,” she notes that “we will never know how it reached the United States.” 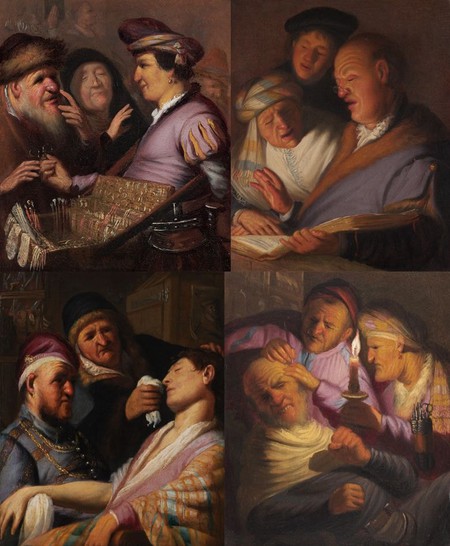 Four of the five paintings in the Senses series | © WikiCommons

Smell remains housed at the Leiden Collection, which is owned by financier and renowned Rembrandt collector, Thomas Kaplan. The Three Singers (Allegory of Hearing)and The Stone Operation (Allegory of Touch) were already in Kaplan’s care before Smell came along, and from May through August 2016, all three were exhibited together for the very first time at the J. Paul Getty Museum in Los Angeles. In September 2016, the prized trio temporarily joined A Pedlar Selling Spectacles (Allegory of Sight) at the Ashmolean Museum in Oxford, England.

The hunt for the series’ final component, Taste, is still under way, though experts note the possibility that it has been destroyed. Colby hopes that the latest episode of Strange Inheritance will lead to its discovery.

The Lost Rembrandt aired on FOX Business Network on January 15, 2018, and will re-air on January 17 at 9:30pm Eastern Standard Time.