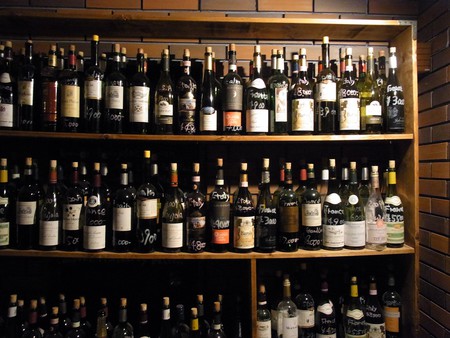 These are not the bottles found in the museum | © naitokz / flickr

Workers doing a renovation project at a museum were surprised to discover cases of Colonial-era wine behind a wall.

More than 50 bottles of wine, including nearly three full cases of Madeira dating back nearly to the birth of the United States, were found during an renovation project at a New Jersey museum.

The Liberty Hall Museum, in Union, New Jersey, is housed in a home built just before the American Revolution and has been under renovation in recent months. Workers knocked down a plywood-and-plaster Prohibition-era wall to reach its former wine cellar without any idea what they might find there.

Behind the wall awaited more than 50 bottles of Madeira, plus 42 demijohns, large glass jugs used to transport spirits. Madeira is a sweet, fortified wine made on the Portugese island of the same name off the coast of Morocco. It was the drink of choice for the wealthy during Colonial times, since it transported well and wouldn’t spoil in heat. Because of Madeira’s relative indistructability, it’s a type of wine that lasts nearly forever if stored properly, meaning that the bottles that were found are very likely still drinkable. CNN reports that some of the bottles date back to as early as 1769.

“We had no idea the bottles were there,” John Kean, the president of the museum, told CNN. “We knew there would be wine, but had no idea as to the date. That was a major surprise.”

The museum would not disclose how much the collection of wine may be worth.