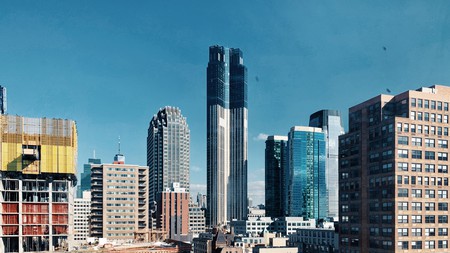 It’s time to call Jersey City the Comeback Kid. After decades of hardship, this Hudson River community is experiencing a true revival. Not just known for being Manhattan‘s sixth borough, Jersey City has enough character, culture and community to win anyone over. Here are Culture Trip’s recommendations of things to know before visiting this Upper New York Bay metropolis.

It’s on a peninsula

Where is Jersey City? You’ll find it overlooking the mouth of the Hudson River, adjacent to New York City. It sticks out on a low-lying peninsula that’s surrounded by water on nearly all sides, alongside nearby Hoboken and Bayonne. This means catching ferries and strolling the waterfront are part-and-parcel of life here. Behind it is the Newark Bay, not far from Newark International Airport.

The second-largest city in New Jersey, Jersey City is only slightly smaller than Newark. There are seven neighborhoods within the city – Bergen-Lafayette, The Heights, Downtown, Greenville, Country Village, Journal Square and West Side – each with their own character. Unless you plan on sticking to a few neighborhoods near one another, you won’t be able to get around just by foot.

It’s having a revival

Once a booming city of industry, decades ago it was home to two large corporate factories – Dixon-Ticonderoga and Colgate. Since then, it’s gone through hard times and experienced many transformations along the way. Jersey City continues to evolve today, seeing more and more urbanites relocate out of Manhattan for a short commute and more budget-friendly living options.

There is a lot of diversity

In the 1970s, many immigrants moved to Jersey City for cheaper rent and its close proximity to New York. Thanks to that, the city remains one of the most diverse areas in all of New Jersey: a true convergence of culture, ethnicities and communities. You’ll find Italian street festivals, Filipino restaurants and trendy Chinese karaoke bars nuzzled alongside each other here.

For all the same reasons that so many Manhattan dwellers are making the move across the river, Jersey City has become a second location for many companies. Over the years, there have been so many new high-rise buildings and additional offices built to house those from Lower Manhattan and Wall Street that it has earned the nickname Wall Street West. Take a walk around Exchange Place neighborhood and you’ll quickly see why.

It’s easy to get there

Jersey City is a mere 15 minutes from Newark International. To get to the city from the airport, you can catch a cab or hop on the AirTrain to Newark, transfer once on NJ Transit to Newark Penn Station and join the PATH (Port Authority Trans-Hudson) train, which will take you to multiple areas of Downtown Jersey City. It’s also around an hour’s drive of two major New York airports: LaGuardia International and John F. Kennedy International. So, if you’re flying in or out of either, be prepared to shell out for a cab ride.

Driving in and out of Jersey City is a breeze, but, thanks to how densely populated it is, just don’t try to find a parking spot. Most streets require permits that are only available to residents. You’re better off taking public transportation, cycling or getting a cab.

Easy access to the Statue of Liberty and Ellis Island

History buffs will love the fact that Jersey City is the only place in the state with direct access to both the Statue of Liberty and Ellis Island by boat. To get there, head to Liberty Park and take one of the Statue Cruises: they can get you to either one of those world-famous landmarks. 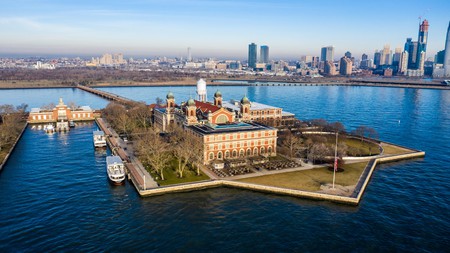 Between 1892 and 1924 Ellis Island was the busiest immigrant inspection station in the US, processing 12 million immigrants | © dbimages / Alamy Stock Photo

…plus, even more history

From the Beaux-Arts opulence of the Hudson Country Courthouse to the Colgate Clock (a remnant from the old factory), Jersey City is a storied place. You can also enjoy the Loew’s Movie Theater, a 1920s palace of a cinema that feels like something from Citizen Kane (1941). It’s still active to this day, frequently hosting special events.

Bring your walking shoes. The walkway runs parallel to the Hudson River and showcases spectacular views of the Manhattan skyline. There are also several piers that you can go along, including the one near Exchange Place that juts out 250m (820ft) into the river.

Liberty State is every bit as green and spacious as that famed Manhattan park. Before you know it, you’ll have spent an afternoon walking or biking the 2mi (3km) loop and being wowed by the Manhattan views. It also connects you directly to the Statue of Liberty, Ellis Island, Lower Manhattan and Jersey City’s own Liberty Science Center. 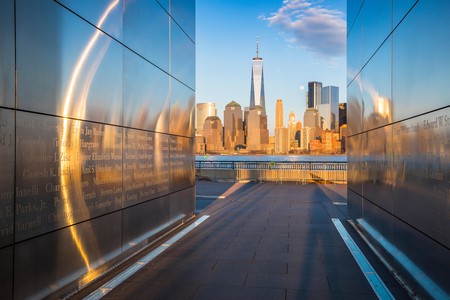 Jersey City is an incredibly diverse community and that spirit extends to their restaurants. Whether it’s authentic Puerto Rican food, Cuban fare or American-fusion menus – you name it – you can find it here. There’s a range in price options too – your budget should never stop you from immersing yourself in some international flavors.

Bodegas on every corner

The locals all know that, even though Jersey City is changing, the beloved old-school bodegas aren’t going anywhere. No matter where you are in town, you’re never far from being able to grab a newspaper and fresh empanada (a baked or fried pastry). It’s one of the things that maintains the close-knit neighborhood feel, even in spite of the ongoing development.

There are areas to avoid

In general, most of the neighborhoods in Jersey City are safe to walk around during the day. However, the danger increases at night. It’s a good idea to avoid the southern areas close to Bayonne, such as Greenville: it’s an impoverished section of town with a high crime rate. Try to stay off the light rail at night as well, since it’s known for muggings.