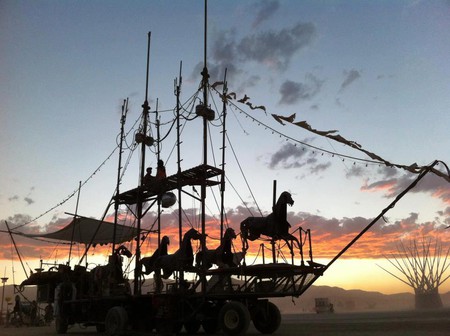 Burning Man encapsulates an intersection between art and celebration of life. The Nevada-based festival boasts decades of innovative themes, and this year is no different.

For the past 21 years, Burning Man’s annual festival theme has honed innovation and artistry—seeking to unify festival-goers through concepts inspiring sculptures, costumes, camps and even the burning Man himself. Inspiration has come from art, science, pop culture and words of wisdom from philosophers both past and present.

Over the years, they’ve included everything from “Carnival of Mirrors” to “Hope & Fear: The Future” to this year’s “I, Robot.” As we go into its 2018 iteration, which is angled toward art and tech, we look back at some of Burning Man’s most remarkable themes over the years. 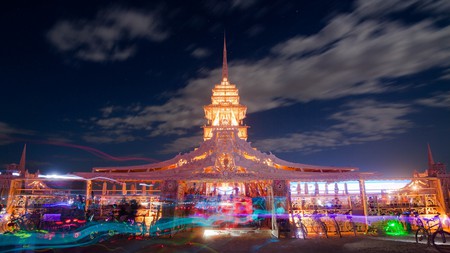 Inspiration: “When people can be made to laugh, they surrender their reservations. With nothing to lose, they suspend disbelief and become more available to experience. The primal and surreal thrive in this environment.” —Larry Harvey, Burning Man founder

Execution: In 1997, Burning Man moved from the Black Rock Desert to Hualapai Flat and Fly Ranch, and a number of financial problems and issues with local officials marred the festival. Still, the community pulled together, and the event was pulled off.

Highlights: The sacred aspect of the theme was embodied by art pieces such as the Shrine to the Dessicated Rats and camps like Womb With a View, which illuminated the mysteries of pregnancy by making it a walk-through, and Kamo Satyrs, featuring the Rites of Neptune and the Shrine of the Mermaid.

Trivia: A reporter from ABC News covered the event. He came in dubious, but ended his stay gazing at the flamingo sculpture, musing on “the desperate rage against the sameness, the blandness, the consumer culture of everyday life and the futility of fighting it.” 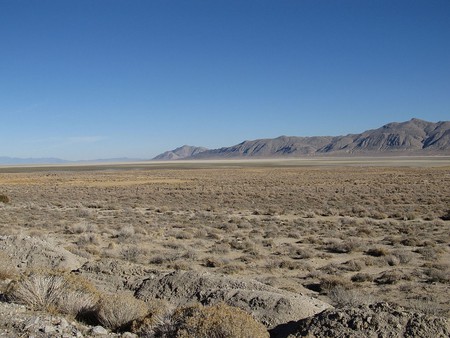 Where it all happens, before it all began: The Black Rock Desert in 1997. | © Ken Lund / WikiCommons

Theme: The Wheel of Time

Inspiration: “Ritual time is cyclical time and quite unlike the ordinary measure that divides our daily lives. This year, as the Millennium approaches, the Burning Man Project will create such a cycle in the Black Rock Desert.” —Burning Man organizers

Execution: Black Rock City was planned out as a giant wheel, with an art gallery in its “inner clock” and other areas divided into present, future and “primordial” themes.

Highlights: Many participants were on-theme, such as 100% Sundial-o-Rama Camp, which was a 27-foot-diameter (8.2 meters) solar timepiece. More abstract was the Dali Homage, which offered real-world versions of some of the melted-clock-master’s paintings.

Trivia: For those who needed a break from desert hippie vibes, the Reno Housewives offered well-sprayed hair and Tupperware, while the House of Jimmy Durante celebrated the Great Depression wit and wisdom of “the Great Schnozzola.” 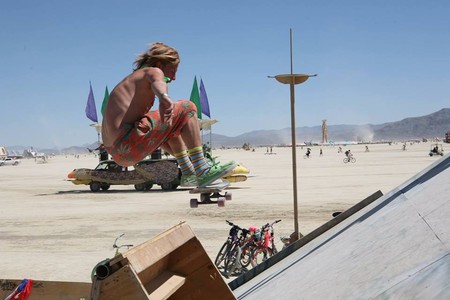 “All the world’s a stage,
And all the men and women merely players.
They have their exits and the entrances.
And one man in his time plays many parts,
His acts being seven ages.” —Shakespeare’s As You Like It

Execution: Attendees could pass through themed installations from The Cradle to The Mausoleum. Those who made it through the first six stages were granted entry to a special platform below the Burning Man—“The Temple”—from which they could look back on their journey.

Highlights: Burning Man may have been about moving through life, but many of the camps honored past pop culture, from the Ween-honoring Temple of Boognish to Lost in Space to Motown and Moe’s Tavern. Although, the “Costco Soulmate Trading Outlet” does sound like adult reality.

Trivia: The Jiffy Lube camp featured a billboard-sized depiction of a sex act in a position facing the road. After some battling with local law enforcement, the campers agreed to move the picture—if they were allowed to drive it through a nearby town first. 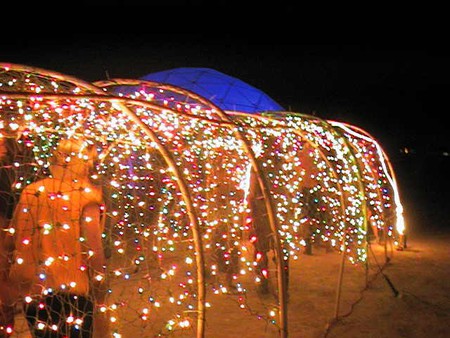 Inspiration: “Imagine the brain, that shiny mound of being, that petit tyrant inside a ball of bone, that mouse grey parliament of cells, that little everywhere, that fickle pleasuredome, that wrinkled wardrobe of selves.” —Diane Ackerman, poet and writer

Execution: The 20th anniversary of Burning Man explored the concepts of consciousness, subconsciousness and unconsciousness via fun houses, graveyards and, finally, the act of artistic creation.

Highlights: For the subconscious, there were the dream worlds of Neverland and Pepperland camps and an art installation that looked like a dreamworld temple village. Camps like Wake and Reik(i), the Whiskey & Whores Saloon and the Hokey Pokey dance club helped one get conscious.

Trivia: As news of the devastation of Hurricane Katrina trickled in from the outside world, Burning Man attendees raised over $35,000 in donations for relief efforts. After the festival concluded, a Burner crew deployed to the area to bring supplies and help set up camps. 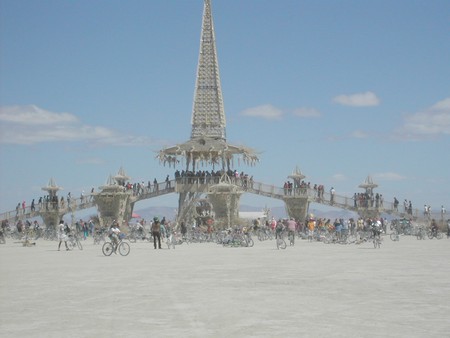 Inspiration: “The past does not repeat itself, but sometimes it rhymes.” —Mark Twain

Execution: The Burning Man stood on a six-story platform decorated with flags of all nations (except the United States), while the streets of Black Rock City were named after car models from Jeep to Impala. Camps honored American institutions such as Hunter S. Thompson and Elvis Presley, suburbia and Math Camp.

Highlights: The theme encouraged attendees to think of America in terms of shared experience rather than national identity. Art pieces included archetypically American works, including a version of the U.S. Capitol dome covered in Native American-style carvings, a flamethrower shooting gallery and a 30-foot-high (9.1 meters) bottle of catsup.

Trivia: A massive windstorm put all of Black Rock City (temporarily the third-largest city in the state) under whiteout conditions. This being Burning Man, everyone stayed put, stayed calm, made friends and rode the six hours out. 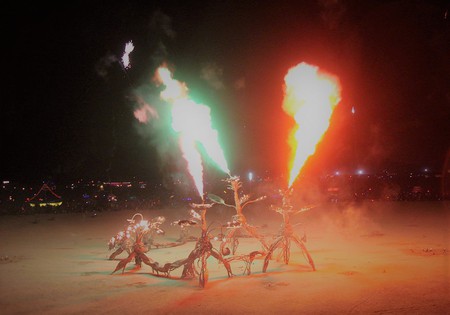 Inspiration: “Changes of condition do not occur without disturbing the life of society and the individual, and it is the function of rites of passage to reduce their harmful effects. That such are regarded as real and important is demonstrated by the occurrence of rites, in important ceremonies among widely differing peoples.” —Arnold Van Gennep, The Rites of Passage

Execution: An expanded playa allowed for an increased number of increasingly intricate art displays, as well as an entire fleet of art cars.

Highlights: In the art playa, the idea of transitioning from one phase to another was explored by the George Boy: Fallen Queen of Broadway installation, which illuminated the life of a washed-up hoofer, while Atomic Test House examined how radiation affects the average family. The Past Life Photo Booth let guests explore their own (previous) dark side.

Trivia: Burning Man itself faced a rite of passage with a record crowd of over 53,000—this was the first year that ticket demand exceeded supply. 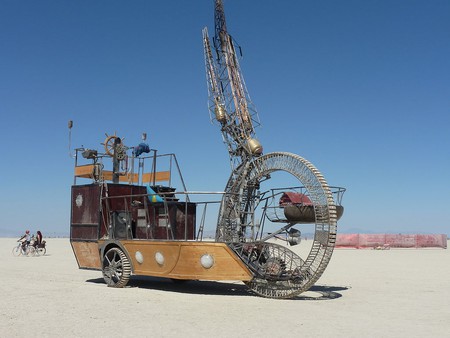 Execution: A focus of this year’s festival was the Guild Workshops, pavilions where people could gather to create, tinker, share knowledge and learn new skills. Art pieces explored da Vinci-appropriate themes such as the human figure, classical architecture, clockworks and other machinery.

Highlights: A robot adaptation of da Vinci’s Vitruvian Man brought Renaissance Italy and 21st-century Nevada together, while the 100-foot-high (30.4 meters) East Asian-inspired “Temple” was the largest yet. 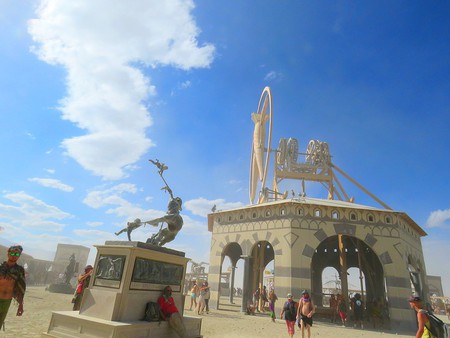