This High-Tech Sphere Is Coming to the Las Vegas Strip 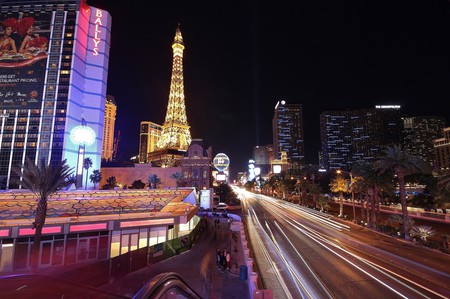 With the latest innovations in sound, video, and technology, the MSG Sphere aims to change entertainment in Las Vegas—and the world.

Las Vegas is known as the “entertainment capital of the world” for a reason. From the Folies Bergere to Cirque du Soleil, it’s the home of the big, bold theatrical display. The MSG Sphere aims to take that flourish for the dramatic into the 21st century when its doors are opened.

The MSG Sphere, a partnership between Madison Square Garden Company and the Las Vegas Sands, will be located right off the Strip, near the Palazzo. As the name indicates, it will be a giant globe stretching 350 feet across. Thanks to LED projection technology, the sphere can be made to look like the Earth, a soccer ball, a glowing orb, or even be made to appear transparent.

Inside, projections can create specialized setting for various performances, be it trippy fractals for an EDM DJ gig, a “rainforest” at a Sting concert or a dystopian wonderland for that Nine Inch Nails residency the kids all keep asking for. The 18,000-seat venue can also be used for product demonstrations and conventions—hello, CES venue—and there is talk of developing interactive narratives specifically for the Sphere.

Stay Tuned for Updates. The Future Is coming… 🌎 2020 #MSGSPHERE #VEGAS

But it’s not just visually stunning: the Sphere will also utilize the newest audio technology. Thanks to something called “beamform” technology, sound can be broadcast to specific seats though thousands of tiny speakers, creating entirely new acoustic possibilities within the venue. Additionally, an “infrasound haptic” flooring system will project bass through the floor, allowing guests to “feel” the music beneath their feet.

Jim Dolan, executive chairman and CEO of Madison Square Garden Company, explained at a press conference that the goal is “to convince you that you are somewhere else…Obviously, if you are in the polar ice cap, you have to feel cold; you have to see the glacier. That is essentially what we are building.”

Las Vegas will not be the only home to an MSG Sphere; another is being developed in London. The Las Vegas MSG Sphere will break ground this summer and is slated to open on New Year’s Eve 2020.