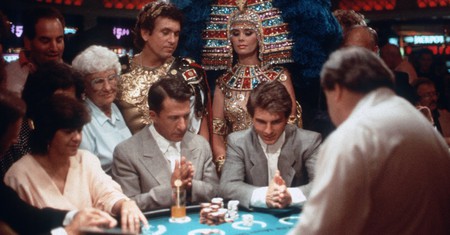 Famous for its many casinos, hotels, and over-the-top entertainment, Las Vegas has been redefined throughout the years thanks in large part to the movies filmed in the city.

Matt Damon’s fourth outing as Jason Bourne not only closed the Las Vegas Strip for a spectacular chase sequence but also destroyed 170 cars in search of ultimate realism. The series has prided itself on using practical effects wherever possible, and Jason Bourne is no exception. Filmmakers leapt at the chance to help with the dismantling of the Riviera Hotel & Casino, which was scheduled for demolition. 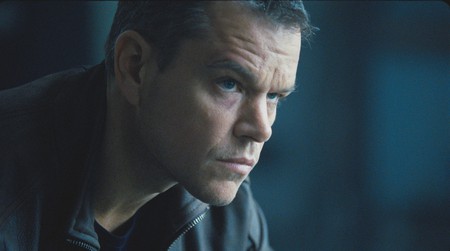 There are good and bad experiences in Las Vegas, and then there is The Hangover experience, which involves a missing groom, wild tigers and Mike Tyson. An unexpected hit when it was released, this comedy treads a very fine line between outrageous fun and gross excess and manages to take us on a bachelor party gone very, very wrong. Caesars Palace was used extensively in the film, with several external scenes shot on Las Vegas Boulevard. 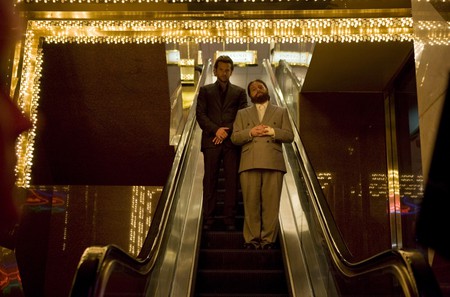 Steven Soderbergh took the original Ocean’s film (see below) and ran with the concept for his remake. The cast is even starrier than the 1960 version, with George Clooney, Brad Pitt, Matt Damon, and Julia Roberts headlining a twisty plot that delights in wrong-footing the viewer at every turn. The Bellagio, complete with its cascading fountains, is the target of the heist at the heart of the movie. 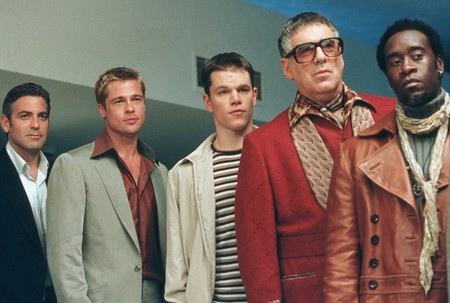 An exhausting 56-day shoot saw Johnny Depp spend plenty of time in Las Vegas. Sadly for producers, the scenes they really wanted to film were in the casinos, but they were limited by permits that only allowed them to shoot between the hours of 2-6am. This trippy take on the work of Hunter S Thompson features the now defunct Stardust Resort and Casino. 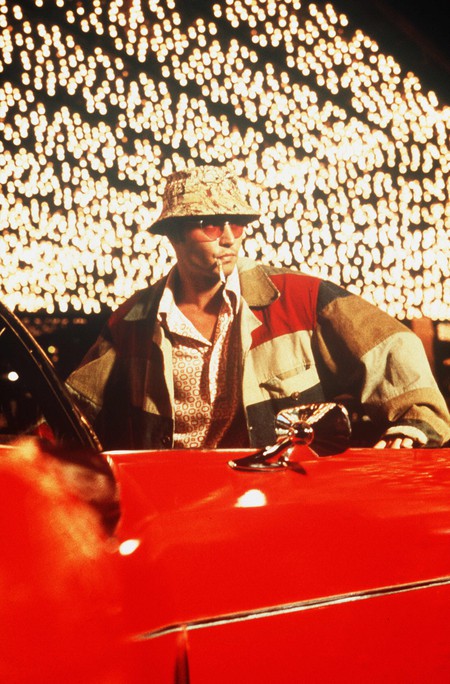 A preposterous action movie, even by the outlandish standards of ’90s action movies, Con Air sees a planeload of dangerous criminals crash land on the Las Vegas Strip. The premiere took place at the Hard Rock Hotel and Casino, a location that was destroyed in the movie with the help of scale models and special effects. The Sands hotel was scheduled to be demolished anyway, so producer Jerry Bruckheimer had no issues crashing into the building. 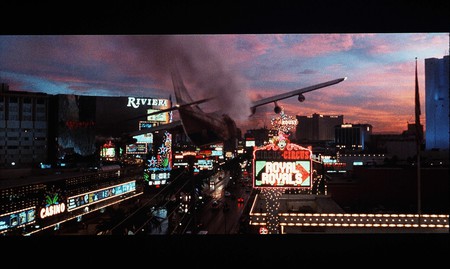 In an Oscar-winning performance, Nicholas Cage stars as a suicidal alcoholic determined to drink himself to death in Las Vegas. The grim and seedy side of the city is brilliantly exposed by director Mike Figgis, who has said that the lack of budget helped achieve a level of authenticity in the movie. With no money or permits, shutting down The Strip wasn’t an option, so the scenes on the streets are about as real as they can be. 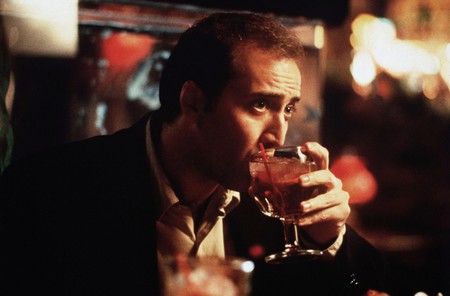 Martin Scorsese’s epic crime drama is based on a non-fiction book that explores the links between the mafia and the gambling world. Robert De Niro portrays a fictional mafia associate sent to Las Vegas to run a casino for the mob. The fictional Tangiers casino was created by using parts of the derelict Landmark Hotel and the Riviera Casino. 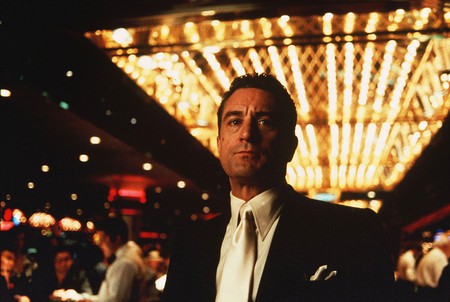 Tom Cruise and Dustin Hoffman star as unlikely siblings on a road trip that culminates in Las Vegas. Pivotal scenes were shot in Caesars Palace where Hoffman shows off his card-playing skills and also learns to dance. The iconic sequence of the brothers descending an escalator in matching suits has been parodied countless times since the film was released. 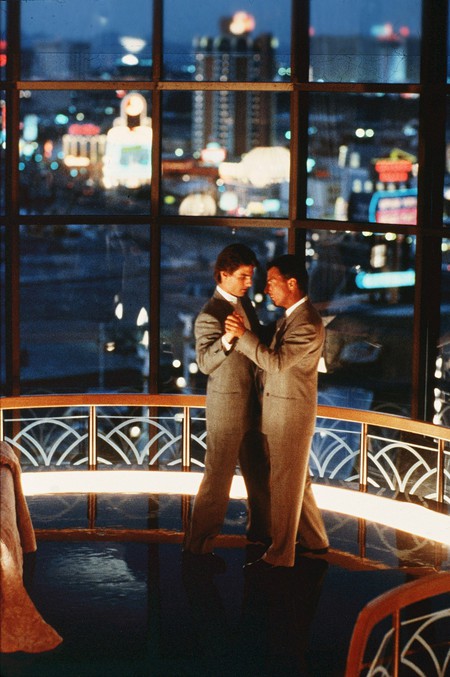 If ever there was a film series made for the glitz and glamour of Las Vegas, then James Bond would be it. Sean Connery stepped back into the 007 role after having declined the chance to star in On Her Majesty’s Secret Service (1969). The plot sees Bond track down an international group of diamond smugglers and end up at the Whyte House casino on the Vegas Strip. In reality, producers used the Las Vegas Hilton to portray the exteriors of the casino and edited around it to make it appear taller on film. 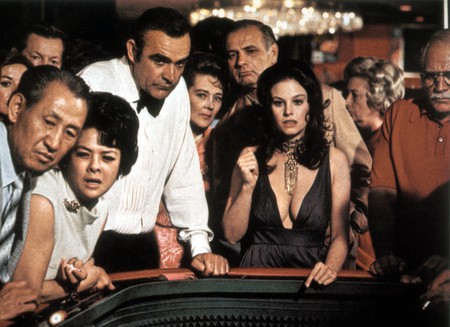 With Elvis Presley at the peak of his powers, this musical was fast-tracked into production without a script or even a concept to speak of. A functional plot was put together, with Presley and co-star Ann-Margret showing great chemistry together on screen in the finished movie. The climactic scenes were shot at The Little Church of the West wedding chapel, the oldest building on the Las Vegas Strip. 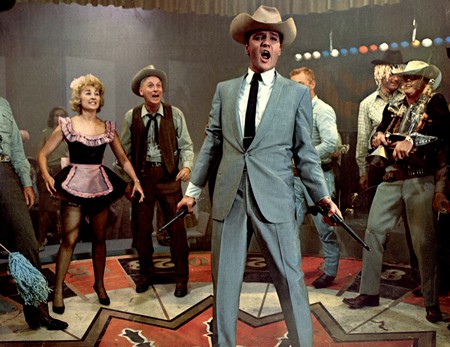 We have to include the original Ocean’s movie, even though it hasn’t aged all that well. The starry cast are in great form, even if they are essentially just playing versions of themselves as part of the infamous Hollywood Rat Pack. Las Vegas was still in the early days of establishing itself as Sin City, a place where gambling, marriage, and divorce were easy to come by, and this film certainly helped build that reputation. 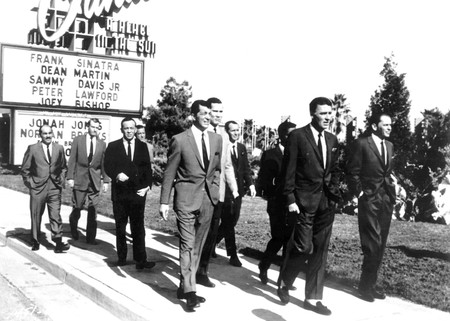