The Best Hotels to Book Near McCarran International Airport 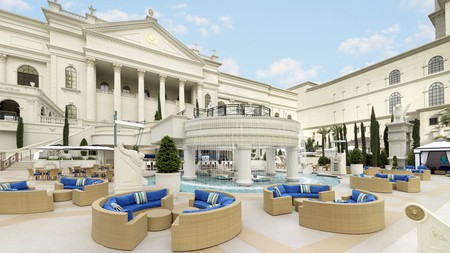 First-class service extends from the airlines at McCarran International Airport to the hotels on the Las Vegas Strip. Less than five miles (8km) away, you’ll soon be indulging in the fine dining, spectacular live shows and casino action throughout the city. Whether you’ll be in Sin City all weekend or are using it as a hub to explore the rest of Nevada, these hotels – bookable with Culture Trip – keep you close to flights in and out of McCarran International Airport.

The Signature at MGM Grand 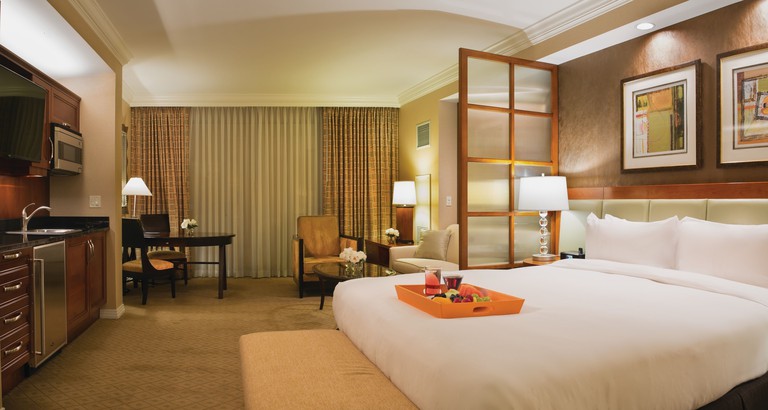 Courtesy of the Signature at MGM Grand / Expedia
Iconic Vegas service comes with a twist at the Signature. All suites feature kitchenettes and soothing spa tubs, while most have private balconies where you can gaze down at the Strip. Breakfast, lunch and brunch get the local treatment at Delights, while the fire pits at the Lounge’s outdoor patio make a fine accompaniment to a few drinks. Reserve a daybed or cabana at the pool and enjoy the generous discount on bottle service. 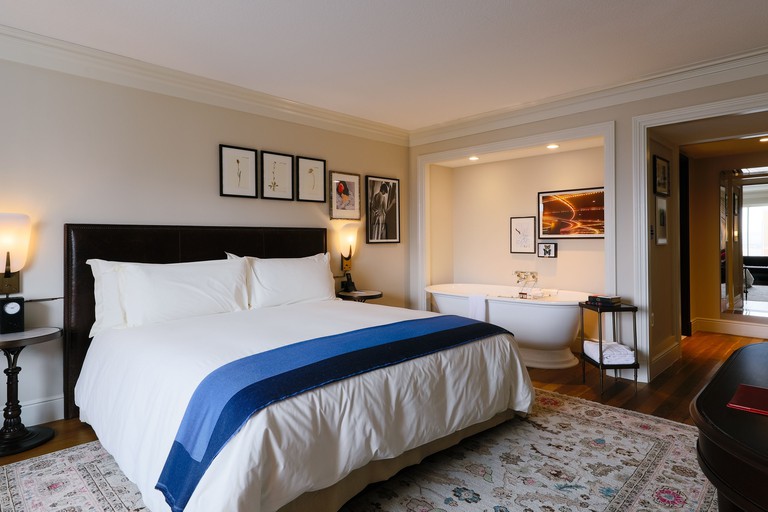 NoMad Las Vegas | Courtesy of NoMad Las Vegas / Expedia
You’ll wander into the NoMad expecting a hotel and instead be treated to ritzy residential vibes. Freestanding pedestal bathtubs, a walk-in Carrara marble shower and billiard table seem more fitting for a New York high-rise apartment. The Moroccan-themed pool deck is so intimate that you’ll wonder if you’ve stumbled on a private retreat. You’ll be greeted like a regular in the NoMad Bar and by the time you order a second round, you’ll be on first-name terms with the bar team. 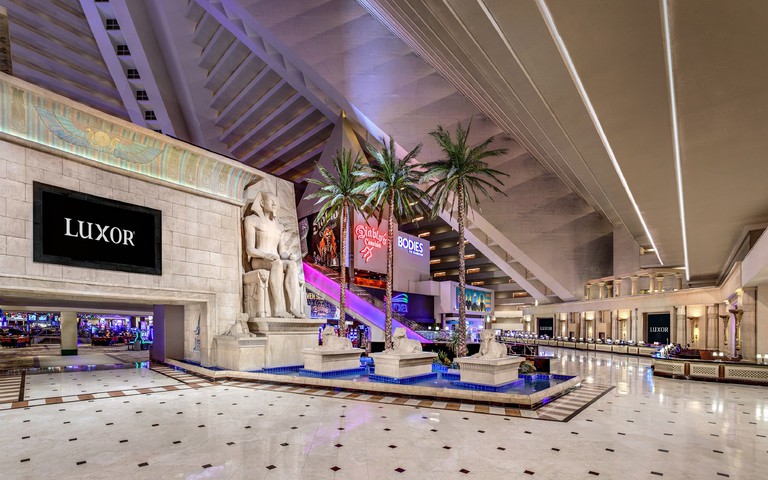 Courtesy of Luxor Hotel and Casino / Expedia
It’s easy to get so wrapped up in the pyramids of Luxor that you feel like King Tut himself. The in-room wet bar, soaking tub and VIP check-in all combine for a royal stay. Don’t feel like you need to be locked in your elite king room all day either; the Nature Spa is a sanctuary that’ll make you feel reborn no matter how long you’ve felt stuck in a sarcophagus. 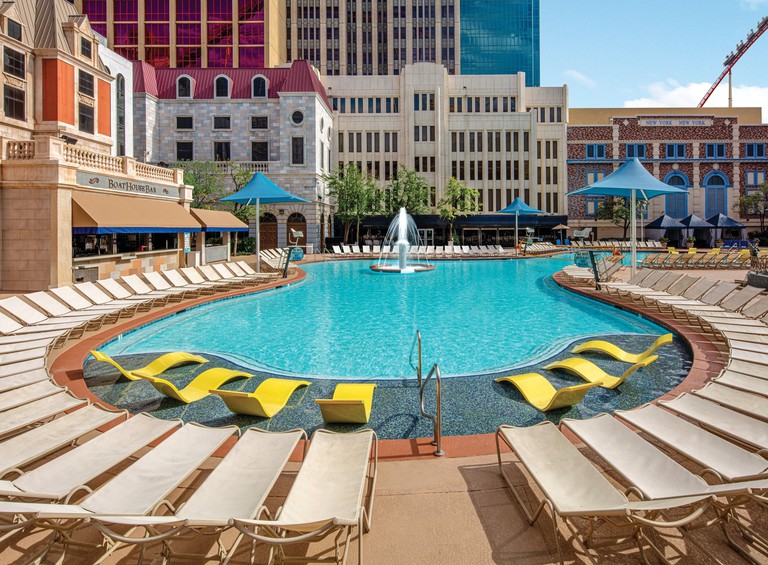 Courtesy of New York New York Hotel and Casino / Expedia
You might not be taking a bite out of the real Big Apple, but New York-New York Hotel & Casino has a traditional NY deli that’ll taste like you’re in the Bronx. Rocket across the faux city skyline on the Big Apple Coaster or find more subdued thrills spinning Sex and the City-themed slots. Up for a walk in the Park? This pedestrian area is such a chill hangout spot, you’ll forget you’re right off the Strip. 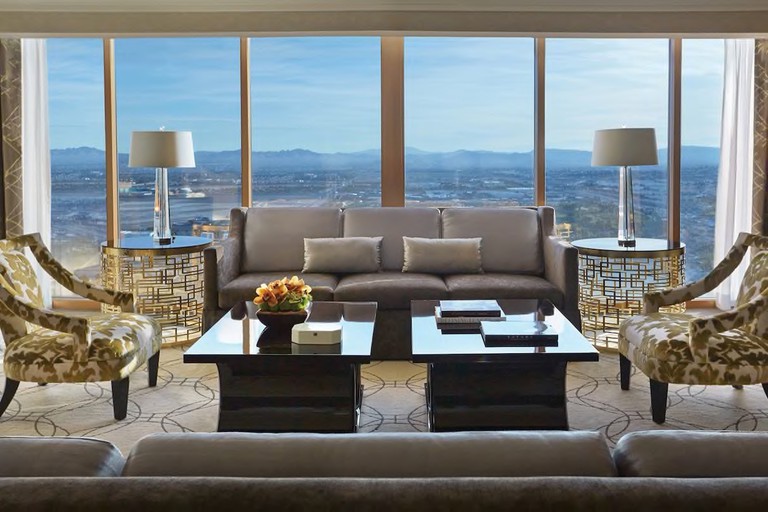 Courtesy of Four Seasons Hotel Las Vegas / Expedia
The Four Seasons Hotel in Las Vegas isn’t playing around when it comes to a responsible and relaxing stay. This non-gaming hotel proves that you don’t need to gamble on the Strip to be a winner. Calm and quiet poolside bliss is rivaled only by the complimentary hourly beverages and snacks. 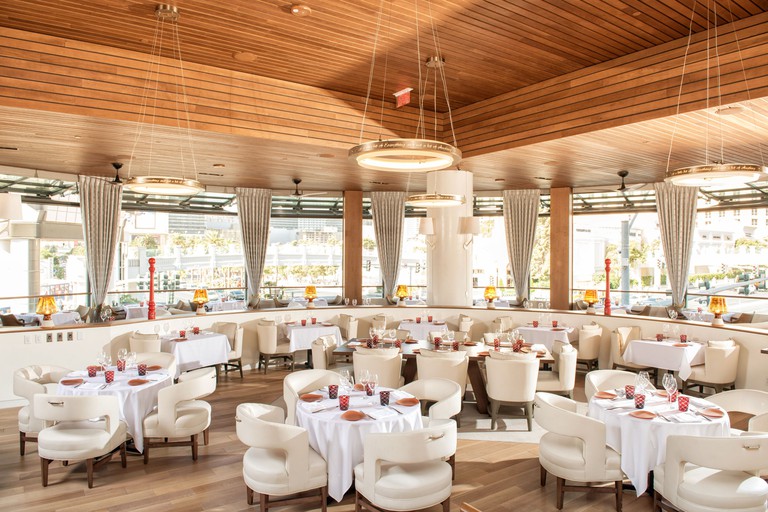 Courtesy of the Cromwell / Expedia
A sophisticated and seductive stay on the Strip, the Cromwell is your kid-free boutique hotel near McCarran International Airport. Rich wooden floors and furnishings, a mix of modern and retro decor, and Strip views make these Parisian-esque rooms simply irresistible. Free live shows, tantalizing nightlife and celebrity-chef dining are there for your indulgence, with no worries about anyone’s bedtime but your own – go ahead and get some use out of the in-room wet bar. 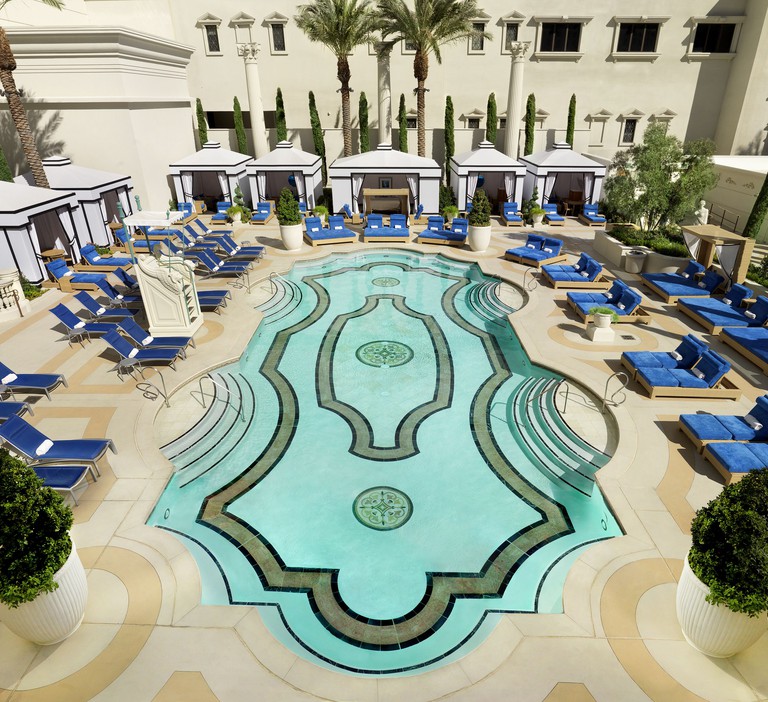 Courtesy of Nobu Hotel / Expedia
You don’t need a taste for fine cuisine to savor a stay at Nobu Hotel, but having one wouldn’t hurt. The expertly crafted Teppanyaki tasting menu at Nobu’s restaurant is as well curated as the Japanese-inspired rooms upstairs. The Hakone Suite is especially stunning, with its 1,000sqft (93sqm) of space and priority seating for the restaurant. It also features a separate dining area if you’re keen for a more intimate meal with family and friends. 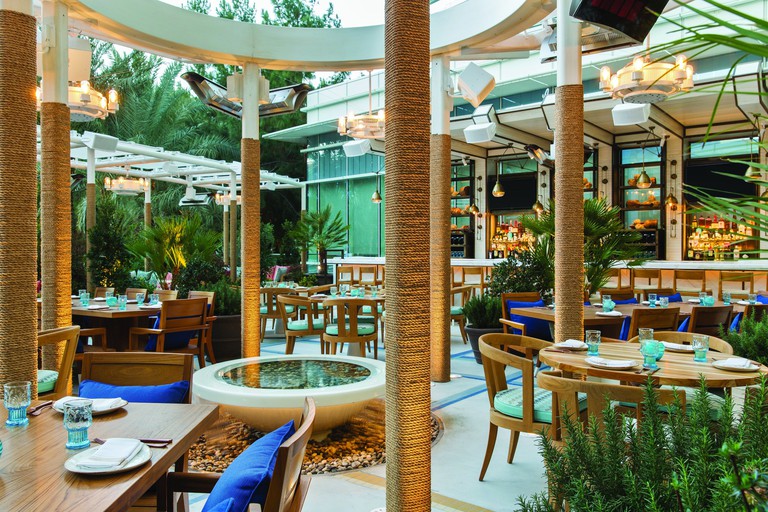 © Aria Resort & Casino / Expedia
Once you arrive at ARIA from McCarran International Airport, you needn’t leave until your departing flight. In-room tablets and controls, combined with a personalized concierge, will cater to your every desire without you having to get out of bed. Need to stretch your legs? Catch a Golden Knights hockey game at T-Mobile Arena, then warm up under the sun at one of ARIA’s three pools.

Looking for somewhere different to stay? Book into one of the best luxury hotels in Las Vegas, or if you’re traveling with a four-legged friend, opt for a top pet-friendly stay. Inspire your itinerary with the best unusual things to see and do in Sin City; don’t miss seeing beyond the Strip with an unforgettable day trip outside it. Should you be thirsty when you return, you’ll want to know the top bars on the Strip.