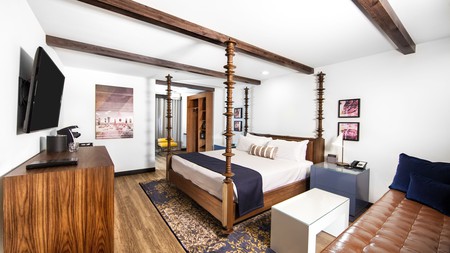 Las Vegas has always been a budget-friendly destination, starting from its earliest days, when casinos mixed with motor courts. Even at a lower room rate, you can still have a top-notch Vegas experience while staying on or off the Strip. Enjoy the area without breaking the bank, with our guide to the best budget hotels in Sin City. 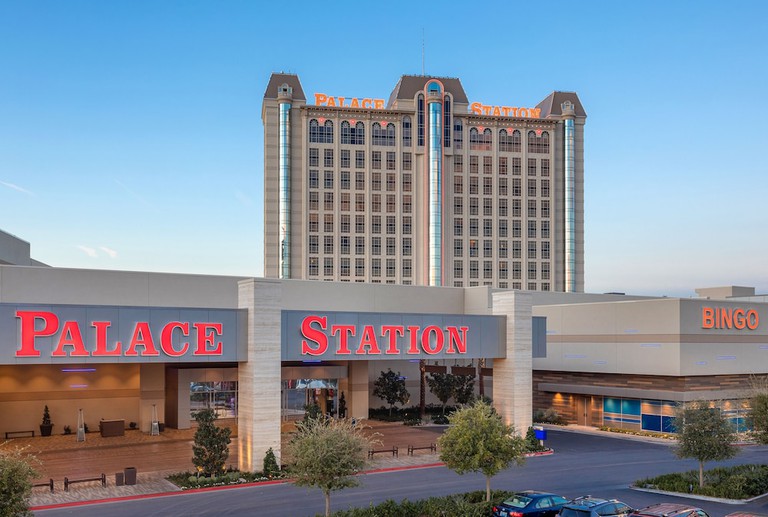 Opened in 1976, Palace Station was one of the first Las Vegas hotel-casinos targeting locals and served as the foundation of the Station Casinos brand. Its recent $192 million (£147 million) renovation has resulted in an upgraded pool area, a luxury movie theater and popular restaurants like BBDs and Boathouse, not to mention its legendary Oyster Bar that is always busy. Just west of the Strip on Sahara Avenue, the hotel is an ideal place to stay, whether you are a resident looking to get away or a visitor interested in getting more of a local experience. 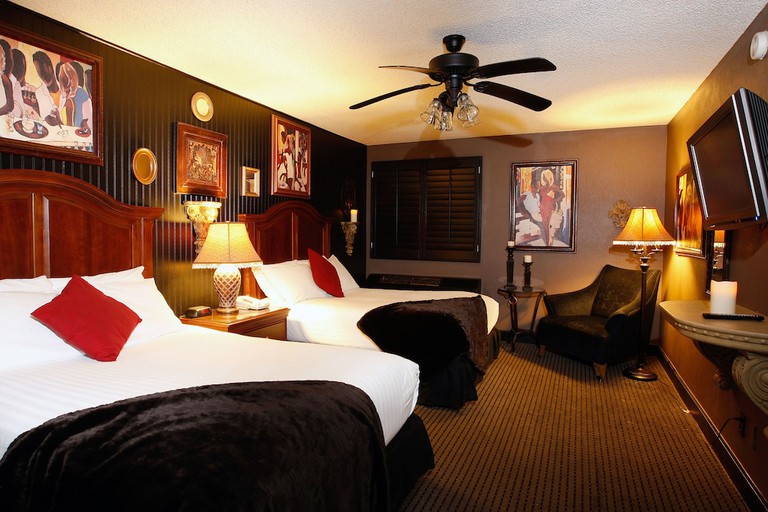 Also just off the Strip on Sahara Avenue, the Artisan Hotel Boutique is a work of art with a lavishly decorated interior that features gothic-style art and architecture. Though the Artisan lacks a casino, which is rare for a Vegas hotel located on or nearby the Strip, the adult-only establishment is famous for its topless pool and lively parties. Though the pool is small, the Artisan lets guests rent the entire hotel for a minimum of $8,500 (£6,520). 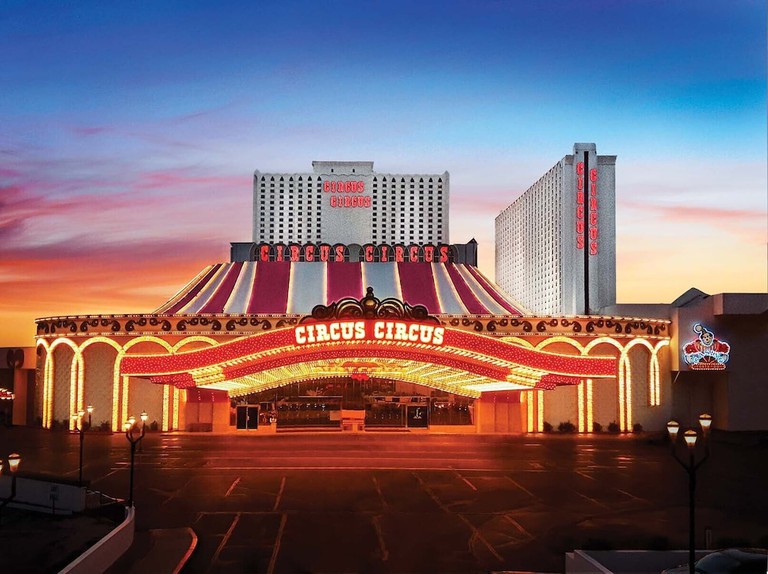 This circus-themed hotel on the Strip has been a family-friendly destination since way before Las Vegas was branded as family-friendly – that’s why it’s always been a cost-effective alternative to the fancier hotels aimed at adult tourists. While there’s still plenty of gambling here, guests can expect to find the Carnival Midway with games and prizes and the Adventuredome, a 5-acre (2ha) indoor amusement park. Like many hotels in Las Vegas, Circus Circus has a pool area for both adults and children. However, this area, which is also known as the Splash Zone, also has whirlpools, a water playground and a 50ft (15m) slide tower. After a day out in the pool, watch one of the famed circus acts that regularly perform throughout the day, completely free of charge. 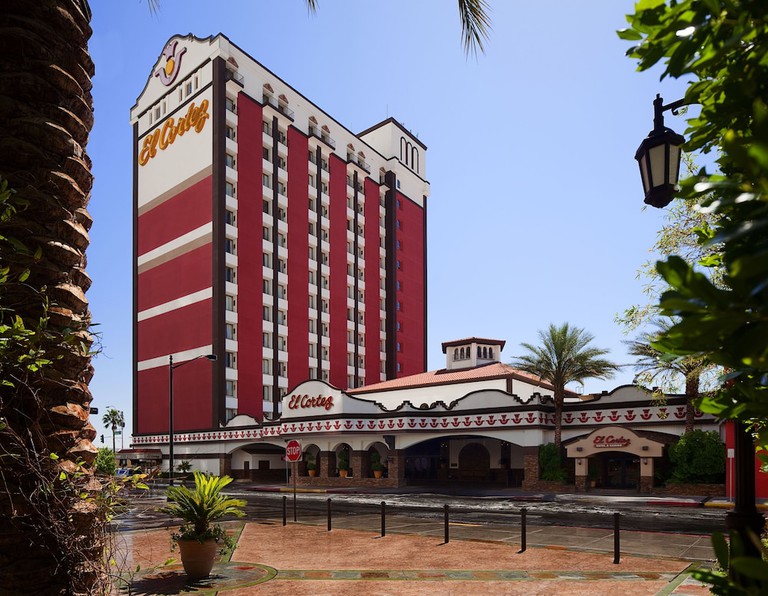 Courtesy of El Cortez Hotel and Casino / Expedia
View Rooms
As East Fremont Street downtown has evolved into a trendy hotspot for restaurants, bars and shopping, the El Cortez has taken advantage of being right next to all that action. As one of the first hotels in Las Vegas (it opened in 1941), the El Cortez has kept its old-Vegas charm, much of it thanks to its decor and ambiance. Step back in time by dining at Siegel’s 1941 (named after Bugsy Siegel), or admire the traditional lounge acts in an establishment that has gone largely unchanged for decades. While the hotel never made room for a pool, guests can enjoy its funky, modern Cabana Suites that fit in with the bohemian vibe of the area.
More info 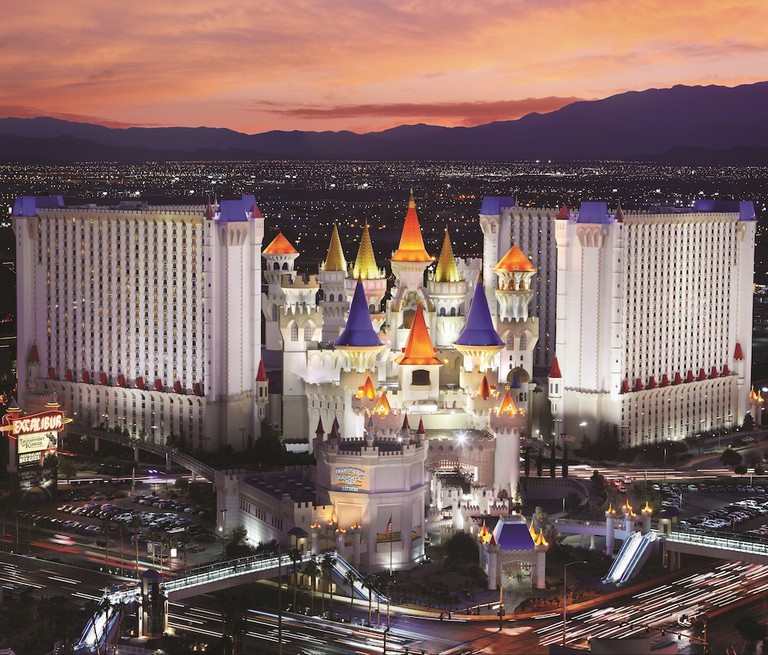 Opened in 1990, the Excalibur was one of the pioneers of the themed-resort trend that would dominate Las Vegas for the next decade, and, while that trend has largely passed, the castle-like hotel-casino is still standing. Being an anachronism has its advantages. For example, the room prices at the Excalibur are now among the lowest on the Strip, and the hotel retains its goofy charm. Lounge at the pool before enjoying a 4D movie, and end your evening at Dick’s Last Resort, a restaurant famous for hiring intentionally obnoxious staff. 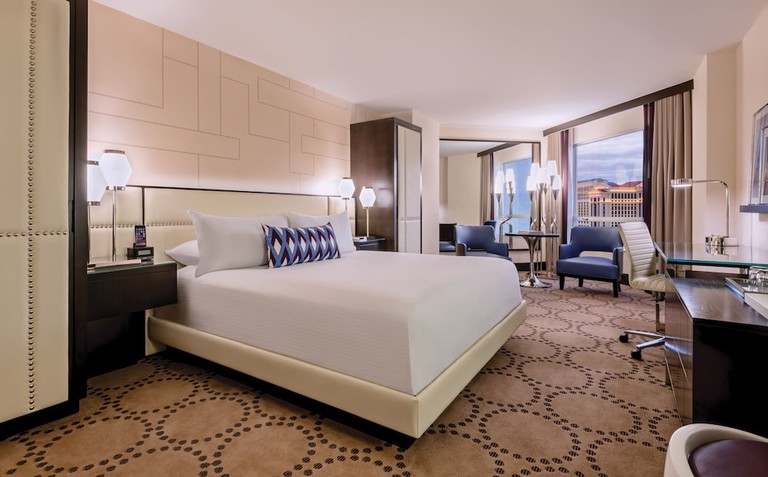 Want to be right at the center of the action on the Strip but not pay luxury prices? Las Vegas institution Harrah’s (opened in 1973 as the Holiday Casino) sits at the middle of the Strip, with room rates far lower than many nearby establishments. However, Harrah’s isn’t short on amenities; from its pool with cabanas to its relaxing spa and renowned Carnaval Court, this venue lets you live it up without overspending. While here, guests can stop by restaurants such as Toby Keith’s I Love This Bar & Grill and the local outpost of Ruth’s Chris Steak House. 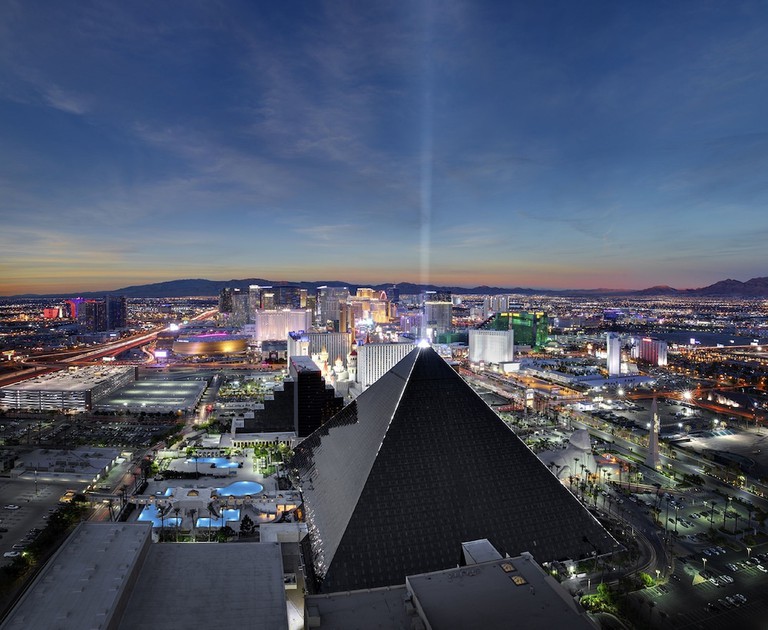 Courtesy of Luxor Hotel and Casino / Expedia
View Rooms
Opened with great fanfare in 1993, the pyramid-shaped Luxor is still one of the most recognizable properties on the Las Vegas Strip. Luxor remains a unique place to stay, even with the removal of its internal Egyptian theme, and prices here are among the most affordable on the south end of the Strip. While there are no more mummies and pharaohs, there are pools for relaxation, popular restaurants, such as Diablo’s Cantina and Public House, and innovative shows like Blue Man Group.
More info 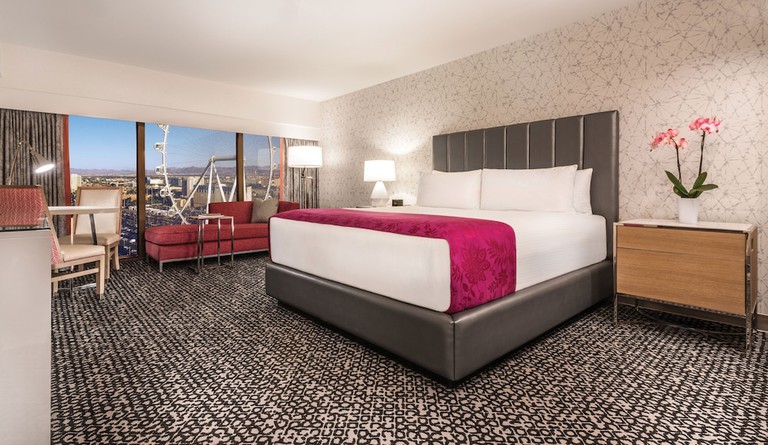 Renowned for being owned by mobster Bugsy Siegel, the Flamingo opened in 1946 and is the oldest continually operating hotel-casino on the Las Vegas Strip. It’s undergone numerous renovations since Siegel’s days and is now known for its collection of actual flamingoes (and other exotic animals) and its lush, lagoon-style pools. Stop by Jimmy Buffett’s Margaritaville when hunger strikes, or explore the hotel’s casino.

The STRAT Hotel, Casino and SkyPod

Courtesy of Stratosphere Hotel / Expedia
View Rooms
Formerly known as the Stratosphere, the STRAT generally marks the northern edge of the Las Vegas Strip and the gateway to downtown Vegas. Situated close to other high-profile Strip properties, the STRAT itself offers striking views of the city that are hard to come by at other establishments. The massive tower is the tallest stand-alone observation tower in the United States, allowing guests to see Las Vegas in a new way. Thrill-seekers will also enjoy the tower, as it’s topped by several white-knuckle thrill rides. Enjoy a meal at the Top of the World restaurant, and relax at the 107 SkyLounge. Alternatively, jump into the rooftop pool.
More info 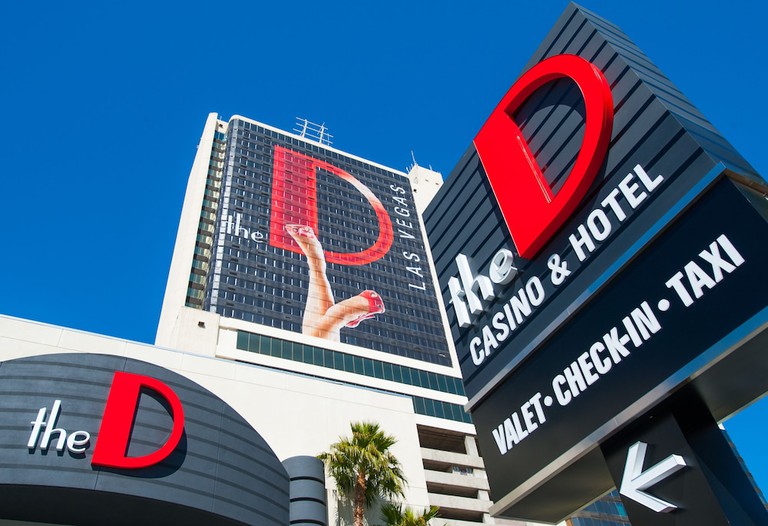 The D Las Vegas is a hotel with a prime downtown location. Set just minutes away from the Fremont Street Experience, the hotel adds to the fun and energetic ambiance found at nearby attractions. The D offers contemporary rooms and suites, a two-level casino with playful dancing dealers on the first floor and a vintage casino on the second floor. Stop by one of the hotel’s four restaurants or three bars when in need of a meal or drink, or take a break in the hotel’s Jacuzzi or pool.

These hotels don’t quite fit the bill? How about a romantic getaway or a room with a balcony from which to enjoy Sin City views instead? Treat your tastebuds to a fine-dining experience after exploring all the major must-see attractions and unusual things to do in Las Vegas.