The 10 Best Craft Breweries In Nevada

Beer Family at IMBĪB | Courtesy of IMBĪB
While there may not be as many craft breweries in ‘The Silver State’ as there are in others, the craft brewery scene is growing rapidly, especially in Northern Nevada as is evident in this list. From restaurant-brewery combos to little joints producing small-batch brews, we’ve curated a list of some of the best breweries in Nevada, from Reno to Las Vegas.

Located in Henderson, Bad Beat Brewing has a fun, laid-back taproom where guests can hangout with friends and play some games whilst enjoying the crafted brews made on-site. Bad Beat offers a variety of year-round brews along with rotating and limited releases, ensuring that every beer lover will find something to quench their thirst. Some beers currently on tap include Hoppy Times (year-round), Smooth Call (imperial oat stout limited release), and Morning Pay Off (imperial breakfast stout — a specialty).

Brasserie, Restaurant, American, $$$
Brasserie Saint James | Courtesy of Marcelina Morfin
Located in the heart of Midtown, Reno, on top of an active spring, Brasserie Saint James is a spacious venue offering handcrafted brews and delicious food. With plenty of indoor and outdoor seating (when the weather permits), guests have a nice, relaxing environment in which to sample the European-inspired and American dishes and, of course, beer made with the best raw ingredients available. An award-winning brewery, Brasserie Saint James’ current selections include Jamison’s Station (an English-style porter) and the Third Man (Belgian-style tripel).
More Info
Open In Google Maps
901 South Center Street, Midtown, Reno, Nevada, 89501, USA
+17753488888
View menu
Visit website
Visit Facebook page
Send an Email
Give us feedback

CraftHaus Brewery situated in Henderson, is inspired by European breweries. Within an open space, complete with colorful furnishings, comfy small couches plus a lively atmosphere, guests can sample the tasty handcrafted brews, with currents highlights including the Rye IPA Tweaked, Old Fashioned, the Centerpiece (a Belgian seasonal sour), and the Any Which Way, IPA. The taproom also features large windows, providing views into where the action takes place. 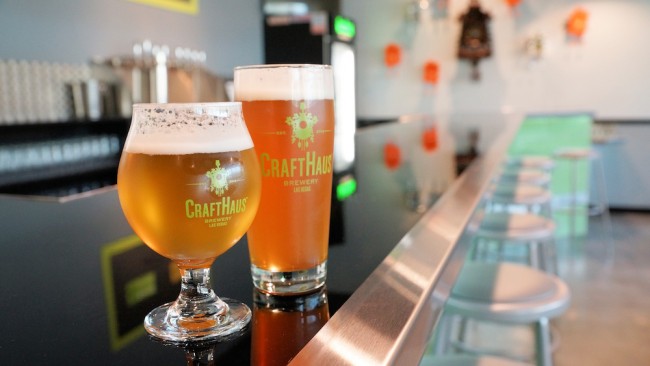 IMBĪB specializes in old-world barrel-aged brews. The brewery features a friendly taproom where guests can have a relaxing and fun night out while sampling IMBĪB’s tasty creations, which include current highlights such as Apricot American Sour, Black Raspberry Berliner, Mandarin Belgian Pale, and Ancho Chili Stout to name a few. IMBĪB does not serve food however, they often host food trucks plus food delivery. They also offer a membership club, classes and even custom orders. 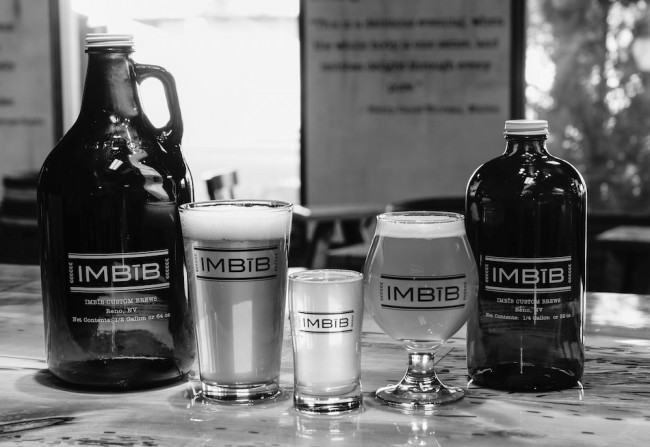 Lake Tahoe Brewing is not located on Lake Tahoe but rather in the heart of Nevada’s capital, Carson City. The brewery’s award-winning brewers create a variety of small-batch brews, from European to barrel-aged varieties, all of which can be paired with a range of tasty wood-fired eats. Some of the beers you might find in Carson City — there is another outlet in Fernley — include the Belgian Witbier, the Irish Stout, the Fossy Fussy with ginger, cantaloupe, honeydew, watermelon and hibiscus tea, and the Oatmeal Brown. Pair your beer with tacos, burgers, and Neapolitan pizzas.

Pigeon Head Brewery is the place to go if you’re interested in lagers and seasonal ales. It features a laid-back vibe and rustic interior space, making it an ideal spot to relax with friends whilst drinking crafted brews like Red Rye Lager, a German-style lager with slight caramel notes, Black Lager, and Pilsner. The brewery also hosts food trucks.

Tucked inside a charming three-story brick building from the early 1900s, The Depot Craft Brewery Distillery is an establishment that is all about looking to the past and resurrecting brewing methods and techniques that many don’t use today. The brewery serves everything from American ales and extra pale ales to Belgian-style ales and more. The Depot is also a distillery, creating its own whiskey, bourbon, gin and vodka. As for food, guests can expect handcrafted meals made using quality seasonal ingredients, including those from local sources.

Under The Rose Brewing Company

Under the Rose Brewing Company is located in a former auto painting shop, adding an industrial feel to the environment, complete with a lofty ceiling. The brewery’s creations can be found not only in their establishment but also in those all over the city. It’s a great neighborhood spot that offers a variety of brews with simple names like berlinerbeer, hellesbeer, saisonbeer (French-style farmhouse ale), and three types of pumpkinbeer, including one aged in a pinot noir barrel. Under the Rose also hosts events such as beer festivals.