Las Vegas' Iconic Blue Angel is Getting a New Home 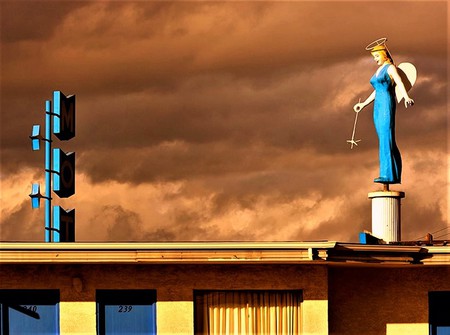 The iconic statue watched over Downtown Las Vegas for decades. Now, she’s getting a new home and her own art exhibit.

“Welcome to Las Vegas” may be the sign that most symbolizes Sin City for tourists. But for locals, The Blue Angel is the emblem of home.

The Blue Angel was part of the signage for the Blue Angel Motel, which stood where Fremont Street meets Charleston Boulevard. A 16-foot winged statue, she stood on a pillar in the parking lot, rotating gently in the breeze, star-topped wand in one hand. But now, the formerly-deconstructed angel will appear once again at the Neon Museum. 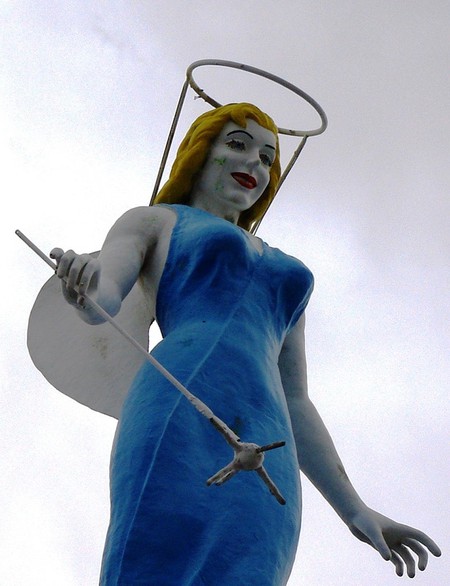 Like the “Welcome to Las Vegas” sign, The Blue Angel was designed by Betty Willis. Her ostensible inspiration for the angel was the Blue Fairy in Disney’s Pinocchio and her name, of course, comes from Marlene Dietrich. Yet, when one looks at the angel, she most resembles Marilyn Monroe with her clinging blue halter gown, coiffed blonde curls, and red-lipped smile.

“My mom did showgirl ads for the paper,” recalls Marjorie “Marjie” Holland, the daughter of designer Betty Willis. “She used to get a complaint that ‘The Blue Angel’ was too buxom-y. She’d say, ‘Well, show me an angel and I’ll draw her.'”

When the Blue Angel Motel was demolished in 2015, she was left standing. But many feared for her future—especially when the city announced plans to rebuild the intersection. The Neon Museum stepped in and offered to store the angel during construction, leading to the new exhibit “Between Heaven and Earth.” In a large room lined with defunct signage, The Blue Angel is spotlit and displayed along with a number of artworks she has inspired. 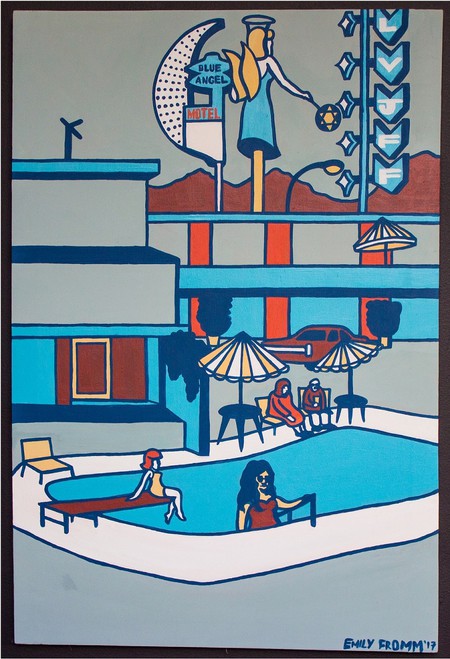 “’The Blue Angel’ is a special emblem, especially to Las Vegas locals. The benevolent figure … combines a showgirl aesthetic with a Disney sensibility,” said Dawn Merritt, director of marketing and public relations at the Neon Museum. “As the figure awaits restoration and re-installation in the public space, the Neon Museum is pleased to offer the community a chance to reconnect with such an iconic work.”

The exhibit features a number of artworks inspired by The Blue Angel statue by artists including Emily Fromm, James Stanford, Jerry Misko, Bryan McCormick, Mikayla Whitmore, and others. Also displayed are a number of images from sketches, postcards, and photographs showing the Angel’s development and display. The centerpiece is, of course, the Blue Angel herself, finally down to Earth where her gracefully curved fingers and aluminum eyelashes can be admired. 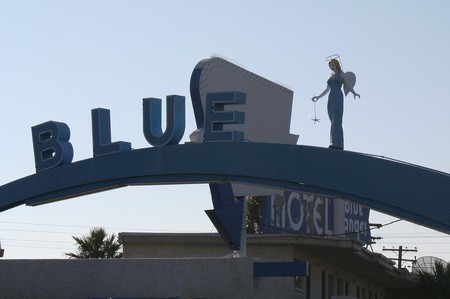 The Blue Angel Motel before demolition in 2011 | © Vox Solid Communications

“Between Heaven and Earth, An Exhibition of the Blue Angel Motel Sign” is in the Neon Museum’s NE10 Studio, located at 1001 West Bonanza Road inside the Las Vegas Review-Journal campus. The gallery is open from 10 a.m.-4 p.m. Thursday through Sunday until July 6.