Graceland Wedding Chapel: The First Chapel With an Elvis Impersonator 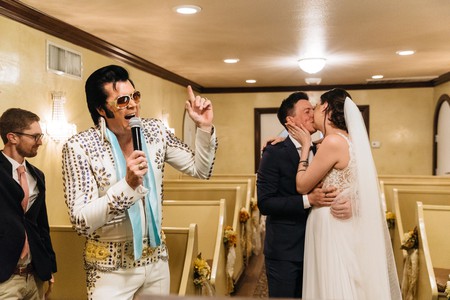 The Graceland Wedding Chapel was the first place in Las Vegas to offer weddings conducted by an Elvis impersonator. More than 40 years later, co-owner and Elvis impersonator Brendan Paul upholds the tradition, having wed over 100,000 couples in his career.

Elvis wedding ceremonies are as essential to the Las Vegas experience as slot machines, pool parties and Cirque du Soleil. Originally a family home, the Graceland Wedding Chapel introduced its first Elvis wedding in 1977, starting a tradition that would live on for decades to come. 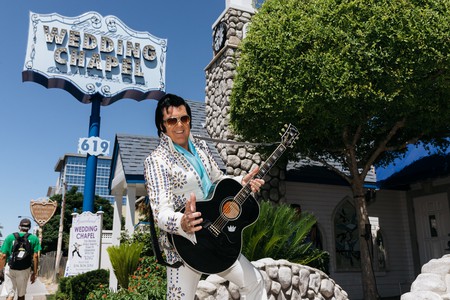 The history of the Graceland Wedding Chapel

Built in 1927, the chapel formerly known as Gretna Green transformed into the Graceland Wedding Chapel 20 years later. But a visit by the King of Rock’n’Roll himself inspired both a name change and a new Vegas tradition following Presley’s death. Though the chapel was the first to offer weddings conducted by an Elvis Presley impersonator, since then, other chapels have followed in its footsteps, with many offering similar wedding packages. Yet, thanks to co-owner Brendan Paul, who’s been performing as Elvis for over 25 years, the Graceland chapel remains the most prominent. The chapel conducts more than 7,000 Elvis-led weddings a year, 4,500 of those led by Paul himself, accounting for 80 percent of Graceland’s overall wedding business. Vegas entertainment and activities are continually evolving, but the popularity of Elvis weddings hasn’t tapered off. “It’s a thing that’s part of Vegas now for a lot of people,” Paul says. 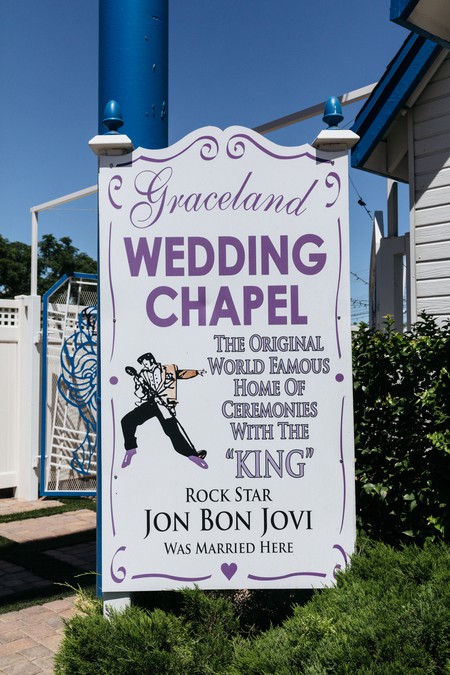 Growing up in Los Angeles, Paul played in punk bands in the 1980s, and his association with Elvis started as a bit of a lark in college. “I started doing Elvis kind of for fun at UCLA,” he recalls. “I’d sing in a dorm, and a girl gave me $100 to sing ‘Happy Birthday’ to her roommate. I just turned up a collar on a sport coat.” That was the beginning of his Elvis transformation, as that soon led to another classmate recommending him to perform as Elvis at a party thrown by her Hollywood-producer father. “I showed up and sang two or three songs, and the guy gave me $800 cash,” Paul says. “I remember going like, ‘My God.’ I was a busboy in college. I’d be happy if I made $100 a day on a whole shift.” 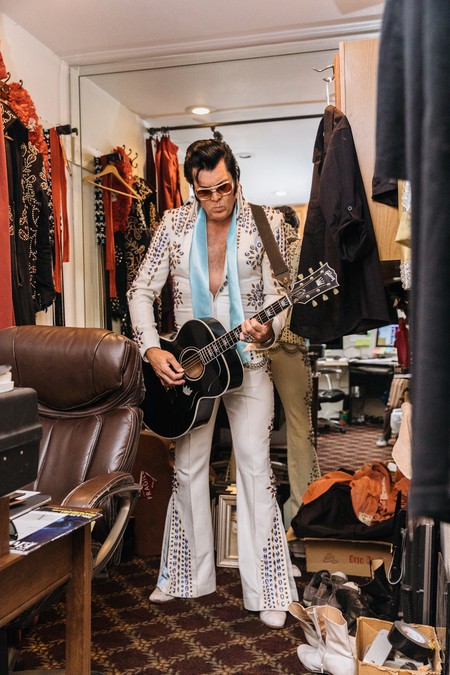 At the encouragement of his parents, Paul moved to Las Vegas in 1995 and tried out for the tribute show Legends in Concert, which at the time was a resident show at the Imperial Palace (now The Linq). Getting cast in Legends is what really launched his career as Elvis. “They sent me to Japan, the Bahamas, Germany,” he says. “They had shows all around the world, and then it just kind of took off.” While working with the Las Vegas Convention and Visitors Authority, he impersonated Elvis to promote Las Vegas tourism and began to fill in on occasional weddings at the Graceland Wedding Chapel since he was friends with the owner. 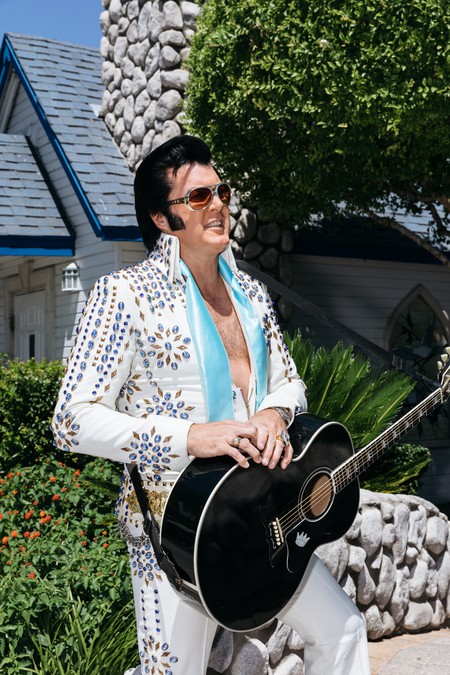 Paul and his partner Dee Dee Duffy purchased the chapel in 2003, making Paul both the co-owner and the chapel’s primary Elvis. “It’s like an athlete,” he says. “You have some good years, but you can’t do this forever. But to have a business, that’s always passive income.” Despite performing as Elvis at over 100,000 weddings in his career, Paul’s enthusiasm for his career and providing couples with a cherished memory hasn’t waned. And while some may consider Elvis-themed Vegas weddings cheesy, Paul brings the right balance of silliness and respect. “I have a sense of humor about Elvis and myself, and I don’t take much in life that seriously anyway,” he says. 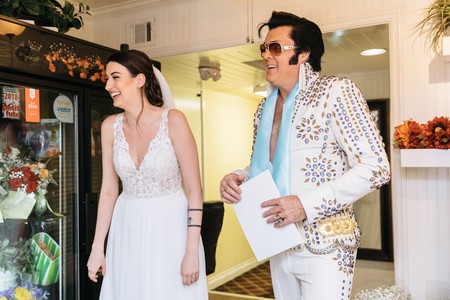 How to get married by Elvis

Graceland Wedding Chapel is open daily from 9am to 11pm, with the capacity to host up to 60 weddings a day, one every 15 minutes. Though some couples make reservations months or even years in advance, walk-ins are common and welcome. “Some will book years out, and then [they] call to let us know it all fell apart and they’re not getting married,” Paul says with a laugh. “You shouldn’t have booked so far out!” In recent years, vow-renewal ceremonies at the chapel have become as common as legal marriages despite a recent downturn in marriage licenses being issued in Las Vegas; as a result, the chapel’s business remains steady. 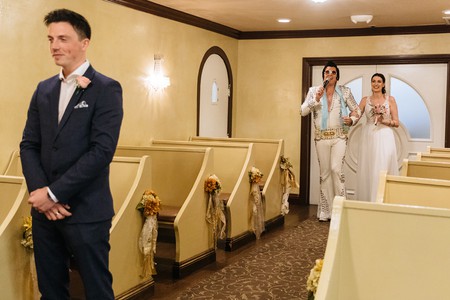 Whether it’s a marriage or a vow renewal, Paul’s approach remains the same. Couples can have Paul himself (a legally ordained minister) perform the ceremony, or they can have a traditional ceremony with Paul as the supplemental entertainment. Since so much of Graceland’s business comes from international tourists, the chapel offers ceremonies in a variety of languages, including French, German, Spanish and Portuguese; however, the performances are all in English. Paul will walk the bride down the aisle singing a classic Elvis ballad like “Love Me Tender” or “Can’t Help Falling in Love,” and close the ceremony with a celebratory rendition of “Viva Las Vegas,” although he’s happy to take requests, including non-Elvis songs. “We try to customize each wedding to whatever you dig,” Paul says. 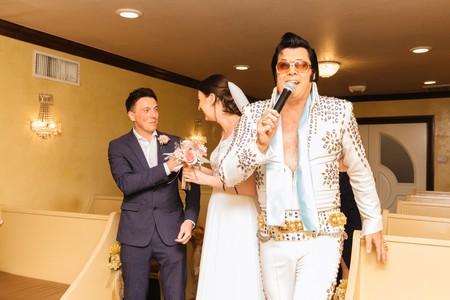 Looking to the future

Although times are changing, the image of Elvis as a Vegas icon has endured. “Elvis has become like a cartoon,” Paul says. “We didn’t do that, we just capitalized on it.” After years of successfully capitalizing on the Elvis hysteria, Graceland Wedding Chapel has perfected its services to the point where it all comes naturally now. “There’s no making up stuff – we know what to say. It’s cute, it’s sincere, it’s funny, all at the same time,” he says. 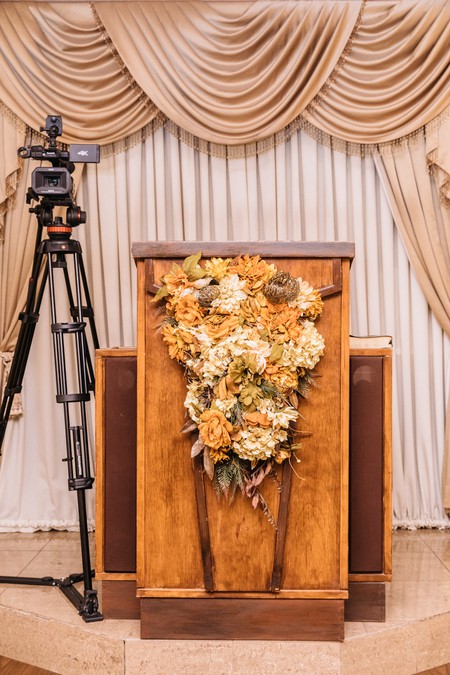 To ensure that it keeps up with the never-ending trends, the chapel has updated some aspects of the ceremony; rather than getting a VHS tape or DVD of their ceremony, nowadays couples can have the video emailed to them or broadcast live on Facebook, where some of Graceland’s videos get up to 30,000 views. Pivoting to vow renewals has also helped keep business fresh, and couples don’t have to wait until their 50th or 25th or even 10th anniversary to have a renewal ceremony. According to Paul, they’ve had couples who have gotten married at another chapel in a traditional setting only to come to Graceland Wedding Chapel 40 hours later to renew their vows. 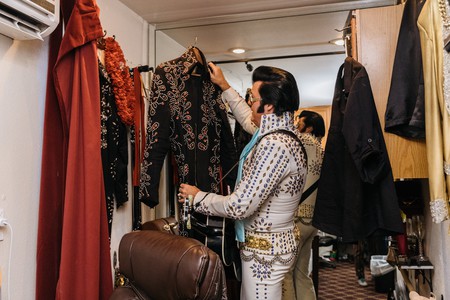 Hmm, what shall we wear today? | © Mikayla Whitmore / Culture Trip

Paul envisions another five or six years as Elvis before hanging up his sequined jumpsuit, sunglasses and TCB ring. But for now, he still gets a kick out of every ceremony. “When I sing [‘Viva Las Vegas’] every time, I see them get so excited. I get excited seeing people enjoy it. That’s where I get my enjoyment,” he says. “What are you going to do, get a real job?”