Beyond the Strip: Four Unforgettable Day Trips You Can Take from Las Vegas 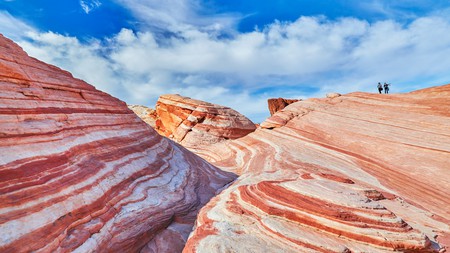 Stripy red and cream Aztec sandstone formations make up much of the Valley of Fire’s 46,000 acres | © Peter Unger / Getty Images
In Paid Partnership With

Drive just an hour or so out of Las Vegas and you’ll quickly find yourself transported from one fantasy land to another. Gone are the nonstop neon-lit playgrounds, and in their place you’ll find rock-cut ravines, ethereal slot canyons, and lakeside party scenes to rival the most raucous pool bars.

Before Vegas was Vegas, this corner of Nevada had been baked by the southwestern sun and hewn by nature’s tempestuous forces over millennia. The desert was here first. Everywhere you look, it makes its presence known. No trip to the Strip is complete without hiring a car and getting out of the city. Even better, use the Verizon Visa Card once you hit the road, to earn rewards on purchases anywhere Visa credit cards are accepted.

Forget the glow of the city lights from the top of the High Roller; you’ve not seen an unforgettable sunset until you’ve seen the rocks blaze in Valley of Fire State Park. As the sun dips towards the horizon, and as it rises in the morning, the Aztec sandstone smolders from amber to ochre.

The rock formations date back some 100m years, while the area was first inhabited around 11,000 years ago. You can still see 2,000-year-old petroglyphs carved into the rocks by pre-ancestral Puebloans and the scattered remains of an ancient petrified forest.

It’s only an hour’s drive to get here from Vegas, leaving you plenty of time to explore. The park covers 40,000 acres (16,187ha) and there’s lots to see, whether you hike to wind-whipped Arch Rock or geek out on geology at the Beehives, where the grooves of cross-bedding were formed by layers of ancient silt.

Some of the best spots to snap pictures are the viewpoints overlooking White Domes Road, also known as Mouse’s Tank Road, and amid the candy-stripe formations of the Fire Wave. 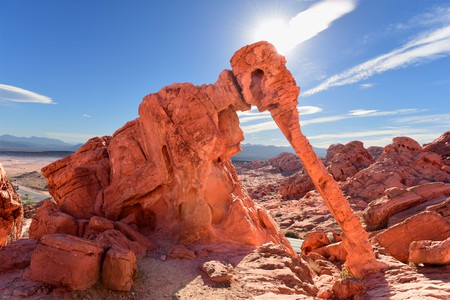 Getting out on the water here is the main attraction. Keep it chill on a moored cabana boat — furnished with sofas, coolers, a BBQ, and a sound system — or hire a speedboat and motor over to rocky Copper Canyon cove, the backdrop to seriously wild Spring Break parties, but much more serene if you visit outside of a holiday weekend.

Boat-in restaurants are the lake’s other big appeal: shorefront dining that’s only accessible by water. Moor up, settle in for lunch out on the deck, and embrace the ultimate antidote to air-conditioned casino buffets.

If you get carried away splashing around on a stand-up paddleboard and diving off floating platforms, the good news is the fun doesn’t have to stop. Treat yourself to a hotel room using Verizon Dollars and head back to Vegas the next day. 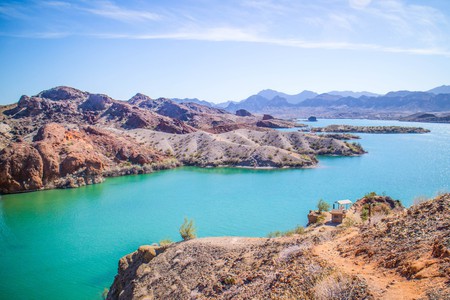 Strike out northwest on the I-15 for two hours and you’ll cross not just state lines but time zones, too. Leave a little after dawn and you’ll have only the first rays of sun for company as you speed through scrubland and twist around chicanes cut from sandstone bluffs.

What destination could possibly warrant such an early start after a late night on the Strip? Springdale, Utah, the entry point for Zion National Park. This park might be comparatively small, but its soaring red-rock cliffs and slot canyons have a movie-worthy magic, especially in the fall when the Fremont Cottonwoods shimmer in a thousand shades of gold.

Even with just a day to spare, you’re spoiled for choice. The easiest hiking routes start by taking the free shuttle from Springdale to the main park entrance, and from there the Emerald Pools trails range from a 1.2mi (1.9km) round trip to a slightly more strenuous 3mi (4.8km) loop — but it’s a shame not to venture further.

Angels Landing is the most famous hike in Zion National Park; the steep – and strenuous – ascent will see you climb 1,400ft (427m), clutching onto chains bolted into the cliffs as the valley drops away beneath you. You can up the adrenaline on guided half-day canyoneering tours, or soak up the scenery on horseback. 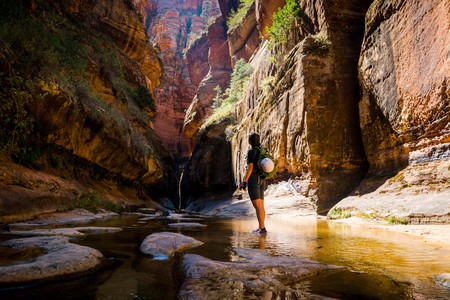 Given that Death Valley is famed for its extremes — clocking up the hottest temperatures in the country — its stark landscapes are surprisingly full of life. This is far more than just a barren expanse of desert, marked not just by dunes and mountains but some 1,000 plant species, which are scattered across the arid terrain.

With a day to spare, there’s a lot to take in. Badwater Basin, at 282ft (86m) below sea level the lowest point in the USA, is an undeniably cool spot to check off your travel bucket list. Get here early to stroll the salt flats and soak up the eerie atmosphere before the temperatures soar and the crowds build.

Equally fascinating are the dusty ghost towns from the late 1800s and early 1900s. Check out Harmony Borax Works, just two hours’ drive out of Vegas, which ceased operation in 1888 after only five years in action. Rhyolite Ghost Town, the largest settlement in Death Valley, has been uninhabited since a brief gold rush ended in 1914.

Even on a day trip, you should come prepared – the scorching heat and full sun are relentless – so pack plenty of water as well as your sense of adventure. 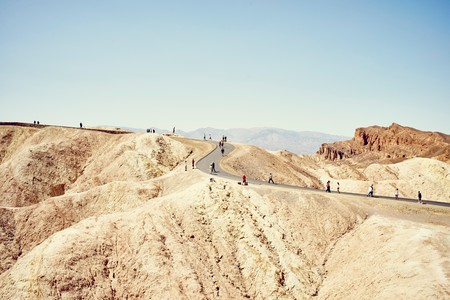