A Brief History of the Pioneer Saloon 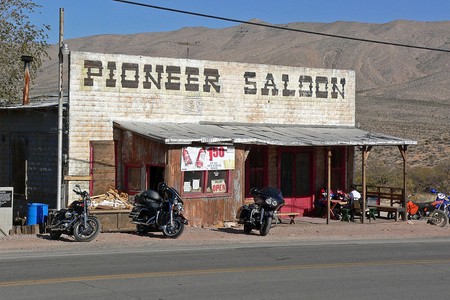 Head south from Las Vegas, as though you were on your way to Los Angeles and after about 30 miles, turn left and drive through a cacti-dotted landscape, up the hill toward the setting sun, and you’ll find the time-warped oasis that is the Pioneer Saloon. The Pioneer continues to pour for over 100 years; it’s the location of gunfights and ghost sightings, movie shoots, and video games.

Built in 1913 by local businessman George Fayle, the bar was formed out of stamped tin from the Sears Roebuck Company—indeed, the Pioneer looks like something out of a ghost town or Western flick with its false front and porch of well-worn boards. Inside, a 19th-century bar dominates the room, the wood worn to a soft, polished glow. The brass rail at the foot of the bar and the potbelly iron stove are both original. If you look beside the stove, you’ll see a few old bullet holes, the result of a long-ago fight over cheating at cards. 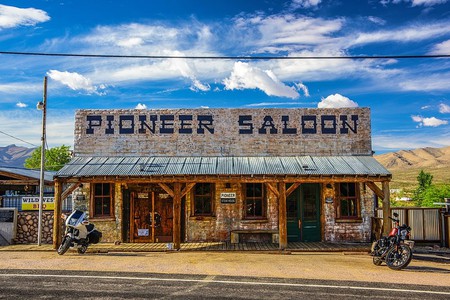 Another tragedy in the otherwise good-time history of the Pioneer involves Hollywood legends Clark Gable and Carole Lombard. In 1942, Lombard was flying back to Los Angeles after a tour selling war bonds and her plane crashed into nearby Mount Potosi. As a team struggled to recover her body from the isolated crash site, Lombard’s husband, Clark Gable, waited at the bar in Goodsprings, drunk and inconsolable. 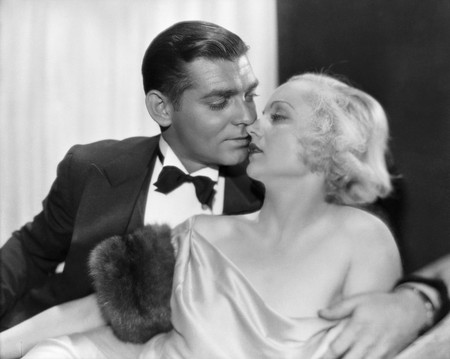 The legend of Gable and Lombard also contributes to the Pioneer Saloons’ reputation as a place rife with otherworldly activity. Both of them are said to have a presence there, as is the target of the bullets that went into the aforementioned holes, a depressive bartender and one of Nevada’s “working girls” of another era.

The saloon’s cast of astral character resulted in featured spots on TV shows such as Ghost Adventures and made it the site of meet-ups for fans of the paranormal. The Pioneer Saloon also occasionally hosts “ghost lockdowns,” where visitors can hang out from midnight until 4 a.m., playing with EVF meters and spirit boxes and attempting to contact Carole, Clark, or perhaps just an anonymous miner.

Pioneer possesses other silver screen connections, too. It was featured in The Mexican, Miss Congeniality 2, and Cheech & Chong’s Up in Smoke, as well as a scene from Fear and Loathing in Las Vegas that landed on the cutting room floor. It has also manifested as the “Prospector Saloon” in the video game Fallout: New Vegas. 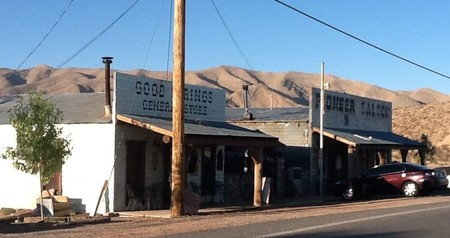 Heading into its second century, the Pioneer Saloon remains a beloved watering hole for both locals and visitors from around the world. It’s a popular spot for motorcycle riders as well as star gazers who appreciate the dearth of artificial light. The bar now offers a menu of sandwiches and burgers (try the ghost burger) as well as breakfast. Entertainment is provided by a jukebox, karaoke, and live bands, but the atmosphere of the Pioneer Saloon is thrill enough.