Why Caesars Palace is the Epitome of Las Vegas 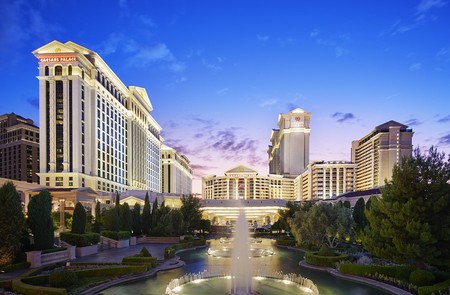 From the over-the-top Roman Emperor theme, to epochal moments such as the Evel Knievel jump and hosting the the modern pop star residency, Caesars Palace epitomizes Las Vegas.

First of all, it’s Caesars Palace, not “Caesar’s Palace.” Why no apostrophe? The resort’s creator, Jay Sarno wanted every guest to be Caesar for as long as they stayed—many “Caesars,” not just one. It’s been one of Las Vegas‘s premiere properties for over five decades, home to some of the city’s hottest nightspots, biggest headliners, most lavish restaurants, and most deluxe accommodations. There are six towers, dozens of restaurants, and over 600,000 square feet of retail space in the Forum Shops Mall.

Caesars Palace opened on August 5, 1966 with a glamorous, celebrity-studded event that made headlines. The Las Vegas Sun commented on the “imported Romanesque statuary, spuming fountains and Italian cypress trees,” while The New York Times noted the “fountains, colonnades and Rococo statuary.”

The main casino had a crystal-studded ceiling above marble statuary, where waitresses in mini-togas and elaborate hairdos brought cocktails to thirsty gamblers. The Bacchanal restaurant offered neck massages and wine poured out of goatskins alongside its gourmet menu. Actors as “Caesar” and “Cleopatra” roamed the property, accompanied by random gladiators and waving royally at patrons. 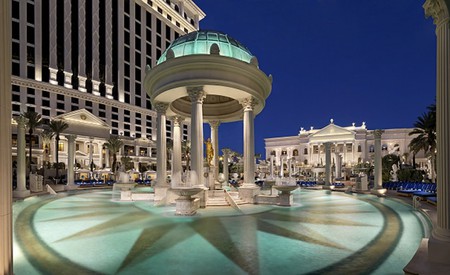 Caesars Palace was the site of a number of major events over the years, beginning in 1967 when Evel Knievel attempted to jump the fountains out front. It was also the site of a number of major boxing matches, such as Muhammad Ali vs. Larry Holmes in 1980, as well as the Caesars Palace Grand Prix in 1981 and 1982. Frank Sinatra headlined Caesars as “the noblest Roman of them all” for years; other stars to take the stage included Dean Martin, Liberace, Judy Garland, and Lena Horne. Caesars Palace has also been featured in a number of films, from The Electric Horseman to Rain Man and Iron Man 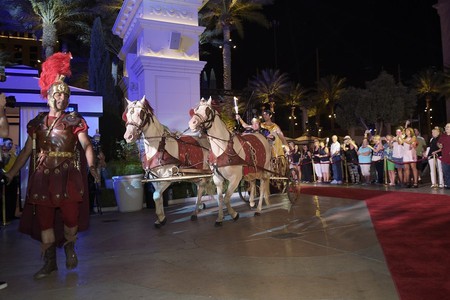 Over the decades, the property has expanded in a sprawling and seeming haphazard fashion, not unlike that of an actual Roman city. Notable additions over the years include the glorious kitschy Cleopatra’s Barge lounge in 1970, complete with floating stage and bare-breasted golden statues. The Forum Shops opened in 1992, becoming one of Vegas’s first high-end shopping spots, featuring boutiques from the likes of Gucci and Versace. 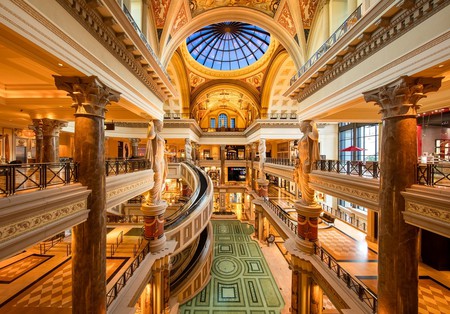 Caesars Palace continues to stand as one of the dominant properties on the Strip. Among the restaurants are Restaurant Guy Savoy, Joe’s Stone Crab, Old Homestead, the Bacchanal Buffet and Gordon Ramsay’s Hell’s Kitchen. Celine Dion, Rod Stewart, and Reba McIntyre are still playing the Coliseum, and the edgy variety show Absinthe is in the Spiegeltent seven nights a week. In the future, when people look back upon “the glory that was Vegas,” Caesars Palace will be one of the brightest spots.