The book-turned-movie Fear and Loathing in Las Vegas is a modern-day cult classic, and is celebrating its 20th anniversary on screen.

Hunter S. Thompson wrote 18 books and hundreds of articles, but Fear and Loathing in Las Vegas remains the one he’s best known for. The book’s unhinged humor and wild surrealism were difficult to capture on film, and it took 27 years for Terry Gilliam’s version to finally arrive on screens in May 1998. But the cinematic version is a staple in classic film history, thanks to top-of-their-game performances from Johnny Depp and Benicio Del Toro, and Gilliam’s eccentric visual sense.

May 24 marks the cult-classic’s 20th on-screen anniversary, and interest in the film’s rich history has never wavered from its fandom. Here are seven facts about Fear and Loathing in Las Vegas you may have missed. 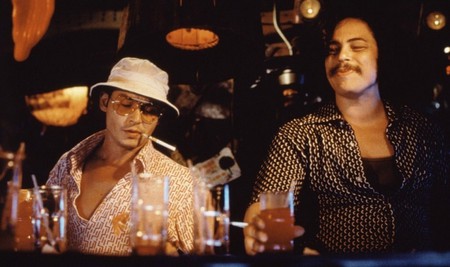 There were several attempts to make the movie before Gilliam’s

Almost since the moment Fear and Loathing in Las Vegas was published there was talk of a movie, but the difficulty of adapting the work and the eccentricities of the author created complications. Over the years, directors including Martin Scorsese, Oliver Stone, and Ralph Bakshi made gestures at adapting the book. Among those considered at various times for the roles of Duke and Gonzo—a.k.a. Thompson and his attorney Oscar Zeta Acosta—were Jack Nicholson and Marlon Brando, as well as Dan Aykroyd and John Belushi.

The version that finally made it to screen began with Depp. Alex Cox—best known for Repo Man and Sid and Nancy—was originally slated to direct the production, but he left after a dispute with Thompson. Ultimately, Terry Gilliam of Monty Python’s Flying Circus and director of films such as Brazil and The Adventures of Baron Munchausen wound up holding the director’s seat—and staying there. 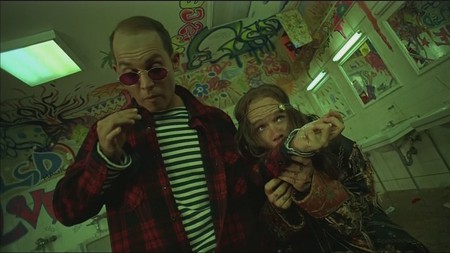 Very little of the movie was actually shot in Las Vegas

Much of Fear and Loathing in Las Vegas was shot in Los Angeles on sets and in the occasional site such as the Bahooka lounge. The two casinos that were used as locations—the Stardust and the Riviera—have both been torn down since the film. The Jean Dry Lake Bed, where the Mint 400 race sequences were shot, is still around—it’s south of Las Vegas, beyond Seven Magic Mountains.

A lot of the dialogue was taken directly from the book

DUKE: “That sense of inevitable victory over the forces of old and evil. Not in any mean or military sense; we didn’t need that. Our energy would simply prevail. We had all the momentum; we were riding the crest of a high and beautiful wave. So now, less than five years later, you can go up on a steep hill in Las Vegas and look west, and with the right kind of eyes you can almost see the high-water mark—that place where the wave finally broke and rolled back.”

When the source material is this good, why change it?

While Bill Murray played a version of Thompson in 1980’s Where the Buffalo Roam, Johnny Depp is the actor most associated with the writer. Thompson personally gave Depp his “blessing” to play the role, Depp moved into the basement of Thompson’s home in Aspen for research purposes and the two became friends—Depp even financed Thompson’s spectacular funeral fireworks in 2005.

In 2011, Depp played “Kemp,” a surrogate for the author in a film version of his early novels, The Rum Diary. Depp supplied Thompson’s voice in the 2017 documentary Rolling Stone: Stories From the Edge, and narrated 2008’s Gonzo: the Life and Work of Dr. Hunter S. Thompson. He also discussed Thompson in the documentaries Breakfast With Hunter and Buy the Ticket, Take the Ride: Hunter S. Thompson on Film.

Prior to filming Fear and Loathing in Las Vegas, Murray called Depp with the advice, “Be careful, or you’ll find yourself 10 years from now still doing him.”

Hollywood cameos appeared throughout the film

Famous faces pop up throughout Fear and Loathing, most of them in the kind of two-minute roles they gave up three agents ago. Leading the pack are Tobey Maguire as a terrified hitchhiker, Christina Ricci as a disturbed painter, and Gary Busey as a lonely highway patrolman (his “give me a kiss” line was improvised). Also in the cast are Ellen Barkin as a waitress, Penn Jillette as a carnival barker, Cameron Diaz and Mark Harmon as reporters, Katharine Helmond as the clerk at the Mint Hotel, and Christopher Meloni as the clerk at the Flamingo Hotel.

The author actually appears in the film

Hunter S. Thompson joined the ranks of authors making cameos in movies of their books (Stephen King does it all the time) 51 minutes into the film, as Depp’s Thompson is having a flashback to San Francisco in the 60s. As he walks in slow motion through a club full of hippies, he says, “There I was. Mother of God, There I am!” And sitting “there” in Las Vegas visor and tinted aviator shades is Hunter S. Thompson himself. 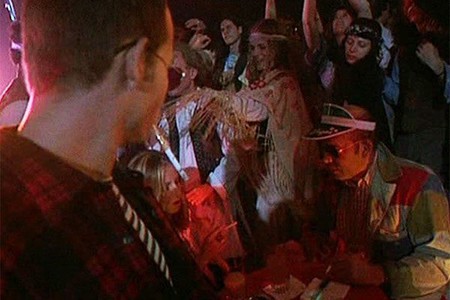 Will the real Hunter S. Thompson please stand up? | © Universal

…and so does a lot of his belongings

When Depp was living with Thompson before filming, he had access to all of the writer’s mementos from his trip to Vegas. Depp wound up taking several Hawaiian shirts, a patchwork blazer, and a safari hat to wear in the film. Also appearing in the movie is Thompson’s own “red shark” convertible, a 1971 Chevrolet Impala. 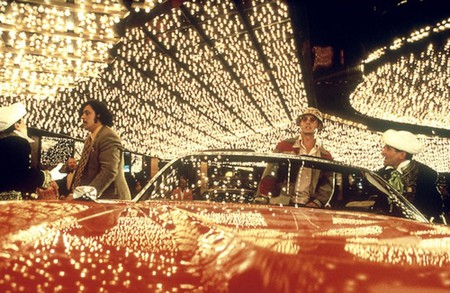 To honor its 20th anniversary, you can catch screenings of Fear and Loathing in Las Vegas in local theaters across the country.