The Luxor is one of the largest hotels in the world, with 4,407 rooms | © Marek Slusarczyk / Alamy Stock Photo

The Luxor is one of the most recognizable sights on the Las Vegas Strip. From the notorious Sky Beam to its allegedly haunted halls, Luxor offers visitors the unique blend of kitsch and glam that defines Sin City today.

The Las Vegas Strip is entirely composed of resorts offering vacationers a smorgasbord of escapism and gluttony. Their names are legendary, from the old-school charm of Bally’s to the glittering luxury of ARIA. Luxor, however, stands out among its peers. Every resort on the Strip offers five-star dining, a labyrinthine casino and a resplendent swimming pool. Luxor, of course, offers these amenities, but in an environment that feels ancient and significant.

Luxor Sky Beam has its own ecosystem

The Luxor Sky Beam is the solid cord of ivory light that courses every night from the tip of the pyramid toward the dark heavens above. With a light so powerful it’s visible to air travelers in Los Angeles, the single beam is created by 39 individual xenon lights with 7,000-watt bulbs. The lights are located in a room 50ft (15m) below the tip of the pyramid and, when on, bring the temperature of the room to upwards of 300F (149C). The light and the heat attract moths to the top of the pyramid, which in turn attracts bats, birds and other predatory animals. 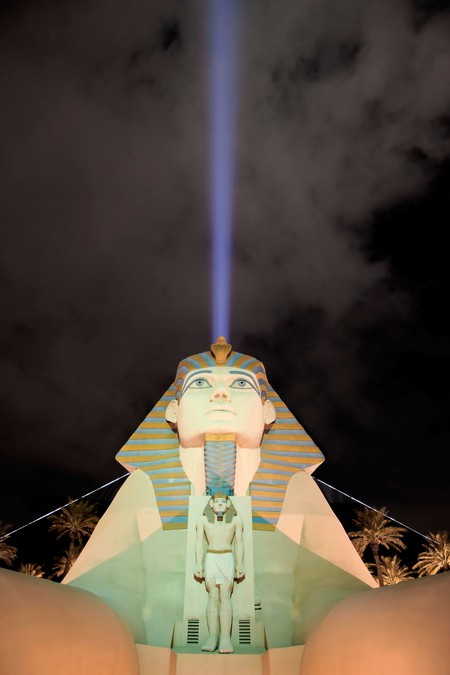 The Atrium is the largest in the world

The interior of the pyramidal resort is its Atrium, encompassing the casino, restaurants, IMAX theater and show venues. By volume, it’s the largest atrium in the world, and with the casino floor and theaters at its base, it is definitely one of the most fun. The walls of the Atrium are lined with rooms that offer a view of the entertainment below. Guest rooms are also located in two ziggurat-shaped buildings outside the main pyramid, so be sure to specify if you want a room with a view of the Atrium. 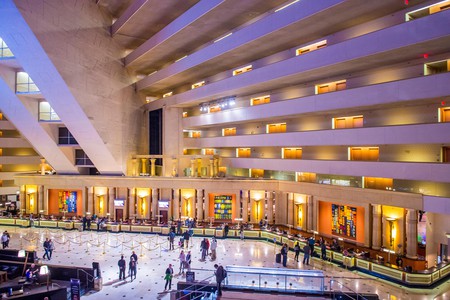 Luxor has a huge venue for video game competitions

The immense HyperX Esports Arena is a gamer’s paradise. With tournaments that are held regularly, gaming enthusiasts can enter the arena for free and pay to play PC and console games in the company of fellow gamers and professional competitors. While playing for cash prizes, the players’ information is kept on a private, secure network, to ensure all information is safe while you pwn the noobs (beat the beginners). Need a break? Step out to the arcade-themed bar for food and drinks. 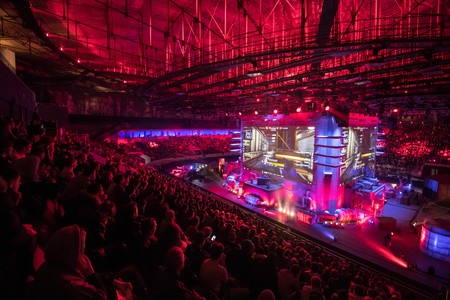 Temptation Sunday is an ongoing pool party hosted by and for the Las Vegas LGBTQ community (and of course visitors) at the Luxor every summer between May and September. In fact, it’s the longest-running pool party in Sin City. Tens of thousands of attendees show up over the course of the summer to swim and revel under the desert sun. Expect themed nights, live DJ sets and surprise celebrity guests. 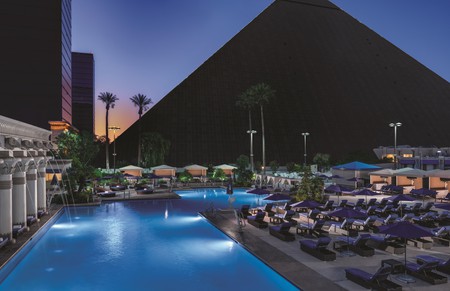 Luxor is the most haunted resort on the Strip

Look up Luxor online and you’ll inevitably find mentions of haunted hallways. The stories can be split up into two varieties: the first is that the various replicas of Egyptian art in the resort (more on those below) have put a curse on the property that causes ghosts and ghouls to congregate and frighten guests. The other is a little more grisly. Legend has it that several workers died during construction of the resort, and their deaths were covered up by hotel management. Their ghosts haunt the resort, seemingly unable to check out for all eternity.

The Luxor today looks quite different than when it opened

The resort was built in 1993 when Vegas hoteliers wanted to rebrand the town as family-friendly. Luxor and its neighbor, the Excalibur, were built for that market in an attempt to merge the casino concept with a theme park environment. When the hotel opened, families checking into Luxor had to ride a boat on an artificial river to get from the check-in desk to the elevator for the rooms (this concept was abandoned a few years later, as wait times for the elevator were exceeding 90 minutes). When MGM Resorts International bought the Luxor in 2007, it spent $300 million to make its newest property less idiosyncratic and more like the other resorts on the Strip. Nowadays, after several subsequent renovations, the Luxor looks nothing like it did when it opened in 1993. 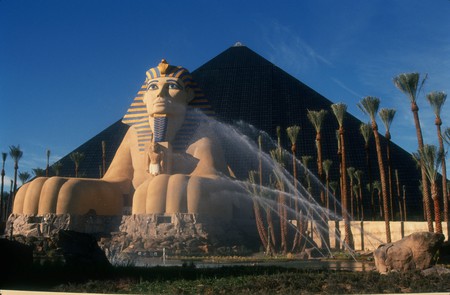 The inclinators are an engineering marvel 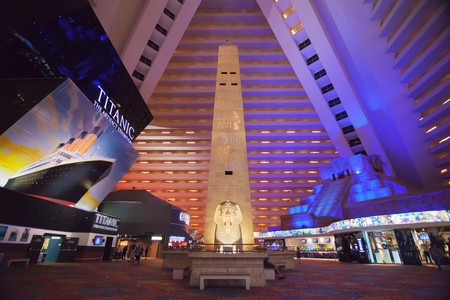 It may not be ancient, but the Luxor is technically as much a pyramid as any found in Mexico or Egypt. The Luxor pyramid is, in fact, one of the largest pyramids in the United States and one of the tallest in the world. At around 350ft (107m) tall, it’s dwarfed only by two of the pyramids in Giza, Egypt. 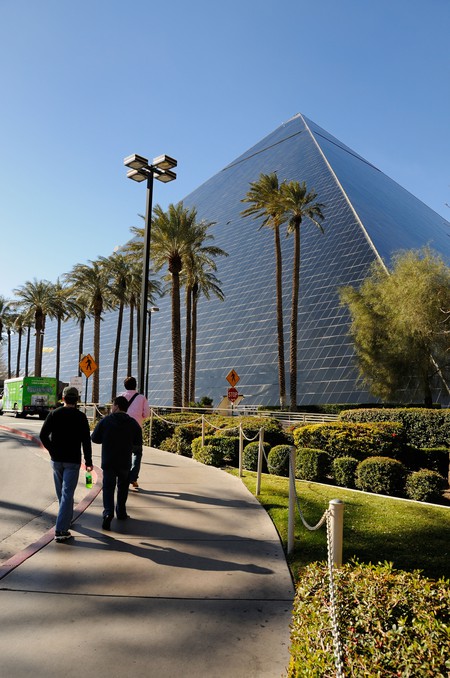 The replica of the Sphinx is larger than the original

You can enter the Atrium through a replica of the Great Sphinx at Giza that covers a moving walkway leading from the Strip into the Atrium. The Sphinx in Las Vegas is 110ft (34m) high, more than 40ft (12m) taller than its antique counterpart in Egypt, making it a popular place for people looking to snap a selfie or two. To get the ultimate selfie with the Sphinx in the foreground and the black Luxor in the back, make sure you go in the morning. 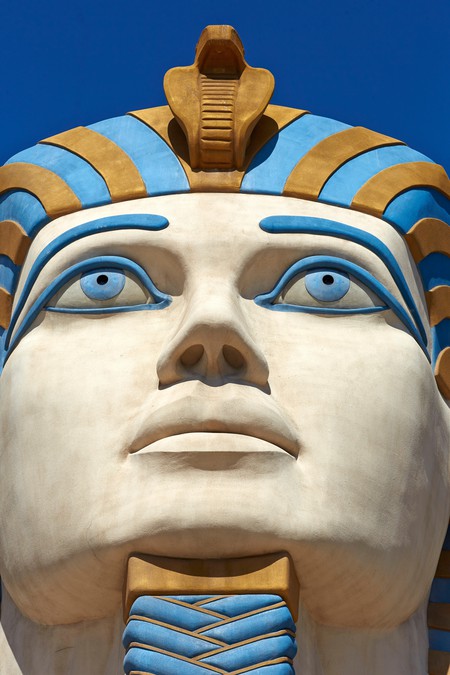 Its disused replicas are now a museum exhibit

Back in its family-friendly heyday, Luxor displayed a trove of high-quality replicas of ancient Egyptian art. In fact, the resort even had a replica of King Tut’s tomb that was one of just two sets authorized by the Egyptian Ministry of Antiquities. As renovations began in 2007, some of the replicas needed a new home, and the Las Vegas Natural History Museum stepped up and took them in for an ongoing exhibit currently called Treasures of Egypt. There are still plenty of Egyptian-inspired statues and murals at the resort, but anyone who wants to know what the Luxor looked like when it opened should head over to the museum.

Who wouldn’t want a stay at the Luxor? Book your stay in this iconic hotel with Culture Trip.