The 10 Best Bars In Lincoln, Nebraska

A glass of bourbon | ©ctj71081/Flickr
Lincoln, Nebraska, has its fair share of bars; some are sports-oriented, some specialize in live music and entertainment and some swear by their large list of cocktails. Some go for all three. Stop by one of these of these 10 great spots and you’re guaranteed a good night out.
Downtown Lincoln at Night ©Stack/Wikimedia Commons

Duffy’s Tavern is one of Lincoln’s downtown institutions. Every Monday night is comedy night, and local acts perform twice a week, Thursdays are for karaoke with a live band, and the atmosphere is friendly and fun whatever the day. As for the drinks, Duffy’s calls itself the “Home of the Fishbowl”; huge mixed drinks served in a real fishbowl. The list includes classics such as the Mai Tai and Jack & Coke, as well as interesting drinks such as the “Circus,” made with Malibu Rum and pineapple.

Bar, Steakhouse, American, $$$
A glass of bourbon | © ctj71081/Flickr
Misty’s Steakhouse & Brewery is famous for two things: its steak seasoning and its microbrews. The seasoning now comes in several different flavors, and the microbrews change too. As for the standard list of the beers available, Misty’s makes its own American Pale Ale, an adaptation of a Belgian witbier, altbier, and a hefty porter. The brewers also add seasonal beers and for those not interested in trying locally-made beers there is a full bar of spirits and wines. For food, don’t miss the succulent prime rib.
More Info
Open In Google Maps
200 North 11th Street, Downtown, Lincoln, Nebraska, 68508, USA
+14024767766
Visit website

Bar, American, Steakhouse, $$$
The Single Barrel combines a great live space, a sports-bar-style giant TV, and a great whiskey and bourbon collection all in one venue. Acts playing here tend to have a country-feel to them; bartenders specialize in whiskey and bourbon and are able to suggest different labels depending on what you’re eating. The food here tends towards barbecue and smoked meats as well as sandwiches. A local favorite is the “Brandon’s Blackened PB&J Pork Chop,” made with bacon jam, peanut butter sauce, and maple and black pepper grits.
More Info
Open In Google Maps
130 North 10th Street, Downtown, Lincoln, Nebraska, 68508, USA
+14029044631
Visit website

McFarland & Son’s Irish Pub refers to itself as an authentic Irish pub; and with standards like Harp, Guinness, Strongbow, Smithwick’s and more all on tap, and bottles of Jameson prominently displayed, it’s not playing around. The bar and pub are decorated in dark wood, and the atmosphere is warm and friendly. Specials here include the “All Day Irish Breakfast” as well as a “Lamb Dip,” made with lamb slow-roasted in Guinness, then served shredded with Irish cheddar on a pumpernickel rye hoagie. To start, try the “Irish Nachos,” topped with corned beef and Guinness mayo. 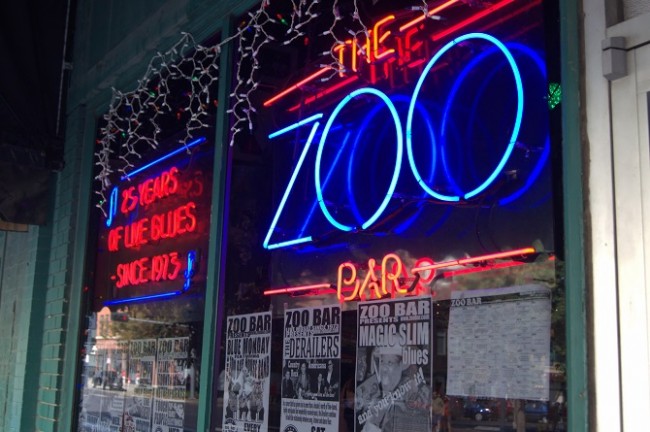 Bar, American, Beer
The building housing the Zoo Bar dates back to 1921, but the bar has been a standard for live acts in Lincoln since 1973. The walls are plastered with posters from groups who have performed there through its history. There’s room to dance, though the venue is not that large. Get there early for a seat, as the place can be packed pretty much any night of the week. Bartenders are friendly, fun, and knowledgeable. In the summer, the bar also sponsors a music festival, naturally known as “Zoofest.”
More Info
Open In Google Maps
136 North 14th Street, Downtown, Lincoln, Nebraska, 68508, USA
+14024358754
Visit website

Bar, American, Beer, $$$
Pinnacle Bank Arena in the Haymarket District | © shannonpatrick17/Flickr
The Other Room is a speakeasy-style bar tucked away in an alley and so hard to find that it doesn’t even give its phone number out. Look up to check the light before trying to get in: if it’s red, no dice. If it’s green, use the door-knocker to see who’s home. To promote a relaxed atmosphere and in keeping with the speakeasy theme, cell phones can only be used for texting, and visitors are urged to use their “inside” voices. Beer and wine aren’t served, just expertly mixed cocktails. A real experience in Lincoln, perfect if you like your bars with a side of drama.
More Info
Open In Google Maps
824 P Street, Downtown, Lincoln, Nebraska, 68508, USA
+14022614608
Visit website
Visit Facebook page

Bar, American, Beer, Pub Grub, $$$
The Watering Hole, on the back of having the “best wings in Lincoln,” has expanded to open three locations, but the downtown place is the original and has been recently remodeled. Eaters with small stomachs beware; the grilled wing portions are enormous. As to be expected, there are plenty of heat, seasoning, and sauce styles to select from. For those not inclined to fill up on chicken wings, there are wraps, burgers, and more bar food standards. Plenty of beer is available on tap, including Empyrean, Boulevard, and more.
More Info
Open In Google Maps
1321 O Street, Downtown, Lincoln, Nebraska, 68508, USA
+14024383054

Bar, Pub, American, $$$
Cucumber martini | © Wendell Oskay/Flickr
Barrymore’s opened in 1974 in what used to be the backstage area of the Rococo Theater in downtown Lincoln; visitors can still see the light board and pulleys. Thanks to its history, the bar is somewhat out of the way, as its entrance is located in the alleyway. Since it’s a proper lounge, Barrymore’s best drinks are its cocktails and martinis, but the bar has plenty of beer choices too. Moscow Mules are a speciality here, and Thursdays are pub quiz nights. Make sure you ask about the story behind the bar.
More Info
Open In Google Maps
124 North 13th Street, Downtown, Lincoln, Nebraska, 68508, USA
+14024766494
Visit website

Restaurant, American, Beer, Cocktails, $$$
The Starlite Lounge is located in the basement of another restaurant and, as its name suggests, the lounge is a trip back in time. Its décor is best described as “Space Age,” with comfy couches and brightly colored swivel chairs. There are some beers on tap, but like a true lounge, the Starlite specializes in cocktails, and the drinks are stiff, especially the martinis, which include cucumber and chocolate variants. Bartenders have been known to slip samples to guests. Food here is 1950s-inspired, with classic such as deviled eggs. Despite the old-fashioned décor, the atmosphere is quite casual.
More Info
Open In Google Maps
247 North 8th Street, Downtown, Lincoln, Nebraska, 68508, USA
+14024758822
Visit website

Bar, American, Beer, Pub Grub
Barry’s Bar & Grill is the place to go for a pre-game beer before a University of Nebraska home game, with an ideal location between Pinnacle Bank Arena and Memorial Stadium. The rooftop bar is one of Lincoln’s best outdoor venues, with a great view of the stadium. Naturally, there are plenty of large TVs to catch all the best games. The atmosphere can get loud, particularly on game days. Signature cocktails include an all house-made Bloody Mary and a “Moscow Mojito,” a tangy cross between a Moscow Mule and a mojito that’s topped with ginger beer.
More Info
Open In Google Maps
235 North 9th Street, Downtown, Lincoln, Nebraska, 68508, USA
+14024766511
Visit website