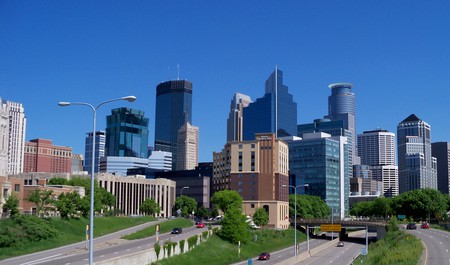 Minneapolis is known for being welcoming to newcomers. “Minnesota Nice” is a characteristic that’s ingrained in many of the residents who live in this beautiful Midwest city. If you’re visiting the Twin Cities and need help with anything, it’ll be comforting to know that the locals have your back. To help you prepare for your visit, here are the most important things you need to know before visiting Minneapolis.

Minneapolis and St. Paul make up the “Twin Cities”

This can be confusing for people who aren’t locals. Minneapolis and St. Paul border each other. Minneapolis is the most populous city in Minnesota, and is known for high-rise office buildings and a vibrant nightlife. St. Paul, the state’s capital, has a historic feel with a focus on classic architecture, neighborhoods and traditions. Many people say St. Paul is more green, quiet and calm, while Minneapolis is younger, more hip and busier. Both cities offer visitors an unforgettable experience. It just comes down to deciding what type of experience you want to have. 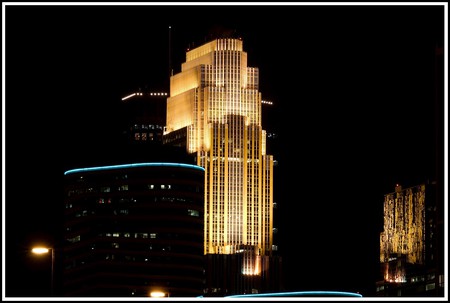 Minneapolis is known for its skyscrapers | © Bala Sivakumar/Flickr

Lake-lovers can revel in the fact that nearly everywhere they go in Minnesota, there’a lake. Minneapolis has about 15 lakes within its limits. Lake Calhoun, a popular tourist attraction, is the largest lake in Minneapolis. Visitors often swim, walk, run and bike along its lake shore. And others head out onto the lake to fish for northern pike or walleyes during summer and fall, and play hockey on its frozen surface during the winter. 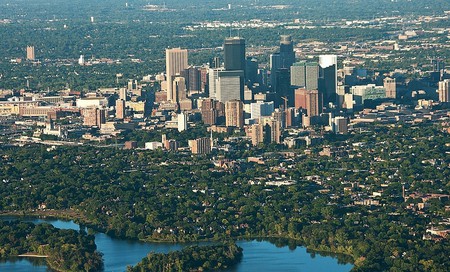 Minneapolis with one of the 10,000 lakes in the foreground | © Ron Reiring/Flickr

Study up on our public transportation

The Twin Cities are known for their convenient and inexpensive public transit system. The Metro Transit offers frequent service to downtown Minneapolis and St. Paul, as well as the Mall of America, the Minneapolis-St. Paul International Airport and dozens of tourist attractions. Most fares are about $2.00 to $3.25, depending on the time of day. For downtown riders who only need to go a few blocks, fares are $0.50. If that’s the case, make sure to tell the driver you are headed to the “Downtown Zone” when you board. At times, you’ll find buses marked with the words “Free Ride” along Hennepin Avenue in downtown Minneapolis. Those fare-free rides transport you from downtown Minneapolis to Washington Avenue. There are machines located along the rail line for payment, or you can download the Metro Transit app and pay there.

If you’re planning to take advantage of the fast, frequent service of the Metro Transit, it’s important to know the difference between the lines. The METRO Blue Line connects Target Field in downtown Minneapolis (where the Minnesota Twins baseball team plays) to the Minneapolis-St. Paul International Airport and Mall of America, which are both located south of Minneapolis in Bloomington, Minnesota. The Metro Green Line travels between downtown Minneapolis and St. Paul. The Red Line travels between Apple Valley and the Mall of America. The Northstar Commuter Rail Line runs from Big Lake, Minnesota to downtown Minneapolis, which may be an easy way for visitors to travel from the city into the suburbs and back. 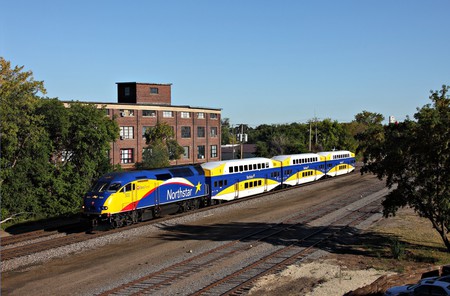 The Northstar Commuter Rail Line, part of the Metro Transit in the Twin Cities | © Jerry Huddleston/Flickr

Know that the airport is south of Minneapolis

The Minneapolis-St. Paul International Airport is located south of the city in Bloomington, Minnesota. It’s close to the Mall of America. Whether you’re planning to head from the airport to Minneapolis or St. Paul, you’ll need to head north. Both downtowns are accessible using the Metro Transit, Uber, Lyft or local taxis. 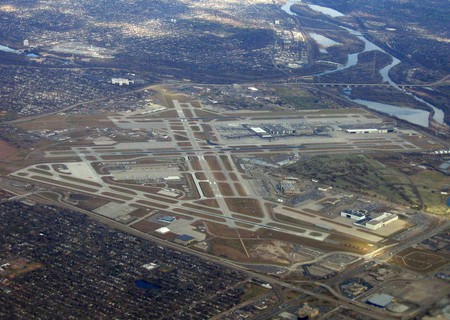 Make sure to wear warm layers.

Minnesota visitors are often caught off-guard by our state’s cooler temperatures, which are evident even in the summer. If you’re wandering in downtown Minneapolis, in the shadow of tall buildings, or even sunbathing at the lake, it may be cooler than you’d think. Make sure to wear layers, so you’re prepared for any type of weather that comes your way.

During the winter, plan to bring the outdoors in

Winters are harsh in Minnesota, so plan to spend a lot of your time indoors if you’re visiting from October to April. Even though you’re indoors, prepare to have a ton of fun. The Twin Cities has plenty of exciting indoor water parks, climbing walls, and other activities to keep you busy. Try visiting the Nickelodeon Universe theme park in the Mall of America to take in roller coaster rides. The Great Wolf Lodge in Bloomington has a large indoor water park, climbing wall, ropes course, miniature bowling alley, an arcade and a live-action adventure challenge named MagiQuest. For nature-lovers, the Marjorie McNeely Conservatory, on the Como Park Zoo property, is a free indoor tropical escape. Or, if you’re just meandering around downtown, take advantage of the Minneapolis Skyway System which connects 80 full city blocks and covers 11 miles. It’s one of the longest continuous systems in the world. 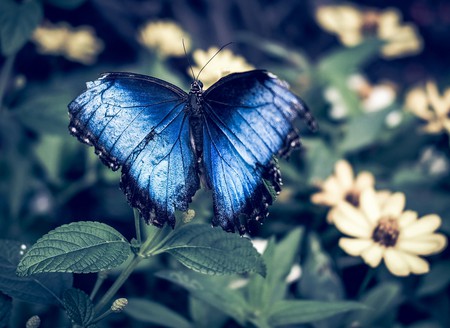 Amenities around Minneapolis are often more spread out than other large cities. Depending on where you’re exploring, you may not run into a convenience store, restaurant, public bathroom, or any other essentials for a few blocks. Wearing practical shoes saves your feet from the misery you may otherwise experience after walking miles through downtown Minneapolis.

If you want to fit in, try “Minnesota Nice”

The Twin Cities are known for our kind, friendly community members, and many people are staunch supporters of the idea of “Minnesota Nice.” To feel like a local, put others first, no matter where you are. If you’re ordering a coffee, ask the barista how they’re doing. If you bump into someone, say “excuse me” or “I’m sorry.” When a waitress asks how you’re evening is, make sure to return the favor. If you’re making a call to a local business, go out of your way to say “have a good day” before hanging up. This practice may seem like a waste of time for those not used to it, but it’s part of the Twin Cities culture that many have come to know and love.

Make time to see a show

There are more theater seats per capita in the Twin Cities than anywhere outside of New York City. That’s a big deal! Minnesota has more than 440 theaters throughout the state, with about 240 in the Twin Cities alone. Check out the Ordway Center for the Performing Arts, Minnesota Public Radio’s Fitzgerald Theater, the Orpheum Theatre, and the State Theatre to take in one of their upcoming shows. Also consider visiting the famous Guthrie Theatre in Minneapolis’ historic mill district or the Chanhassen Dinner Theatre where you can dine, drink, and enjoy a stellar performance. 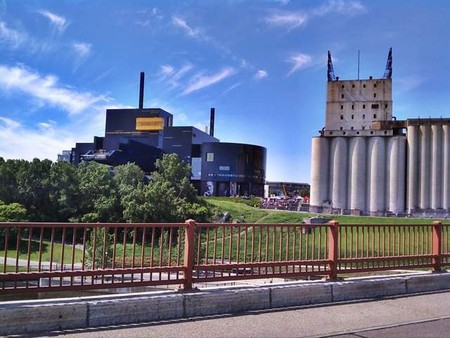 Minnesota has two of the 10 largest art museums in the country. The Minneapolis Institute of Art is a free, fine art museums located in Minneapolis on a beautiful eight-acre campus. It’s often considered a must-see for art-lovers. The Walker Art Center is a world-class, multidisciplinary contemporary art center and near the famous Minneapolis Sculpture Garden which has more than 40 permanent art installations on an 11-acre park, making it one of the largest urban sculpture gardens in the country. 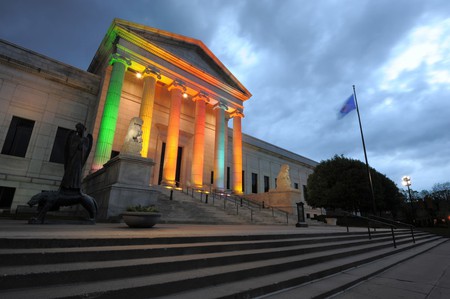 Minneapolis Institute of Art on an overcast night | © Avanidhar Chandrasekaran/Flickr 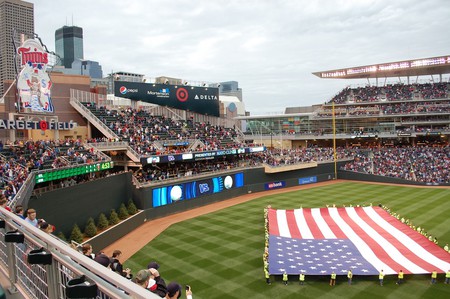 Minnesota has no sales tax on apparel and accessories, which comes as a huge relief to shoppers hoping to experience the Mall of America. It opened in the 1990s, and is the largest mall in the United States in terms of total floor area, and the twelfth largest in the world. The mall has its own coupon books which you can buy at Guest Service desks near the entrances. Shop there, or one of the popular outlet malls surrounding the Twin Cities to save some major money. For a few other deals and discounts, check out Explore Minnesota’s “Find Deals” page, where you can find unexpected deals such as a Mall of America entertainment bundle, to ice fishing trip discounts and more. If you’re headed to a certain suburb, check their local visitors bureaus for deals on their websites, as well as Chinook Book for even more ways to save money. 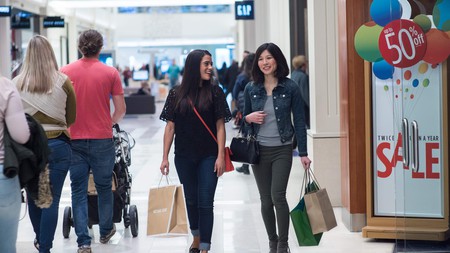 Explore MOA, one of the largest malls in the world | Courtesy of Mall of America

The City of Minneapolis offers Public Safety page which is worth reviewing before you visit. It displays interactive crime mapping and a crime data dashboard to help you learn about the most dangerous parts of the city ahead of time, and what to expect. The City of St. Paul has a similar website. Both websites explain how to report crime. Otherwise, remember to dial 911 if you have an emergency and you’ll get connected to an agency that can help.

For those visiting Minneapolis from out of the country, remember to exchange your local currency to U.S. dollars before you arrive. If you forget, Travelex Currency Services is available in the Minneapolis-St. Paul International Airport to help last-minute.