This Michigan Town Is Home to the World’s Biggest Burger 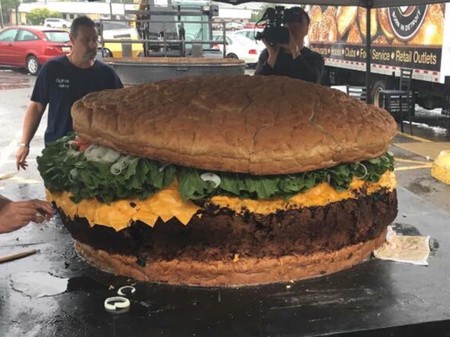 What an 1,800 pound burger looks like | Courtesy of Mallie's Sports Grill & Bar

Mallie’s Sports Grill & Bar in Southgate, Michigan, opened in 2005 and broke the Guinness World Record for the world’s largest burger for the first time in 2008 with a 138-pound burger, at the time considered huge.

Mallie’s subsequently featured on Man vs. Food in 2009, with Adam Richman part of a 40-person team that failed to eat a new 190-pound version of the “Absolutely Ridiculous” burger in under two hours.

Despite increasing the size of their burger to an even more ridiculous 250 pounds, the stakes were massively raised in 2011 when an incredible 777-pound burger was created and served at the Alameda County Fair in California. 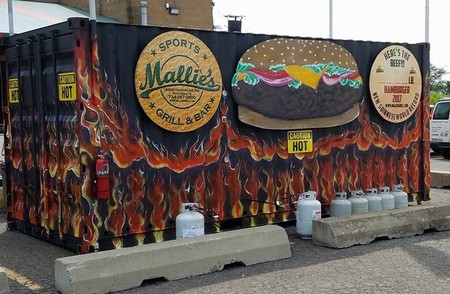 Not to be deterred, owner/founder Steve Mallie got to work on how he could reclaim his title. Now, six years on, he and his team have smashed the record with a frankly enormous 1,800-pound burger. They had to build an oven especially for it, and it took more than 16 hours to cook. The burger comes complete with 300 pounds of cheese, tomatoes, lettuce, pickles and onions, and a 250-pound bun.

On the menu and available to anyone with $9,000 to hand, all you have to do is let them know 72 hours in advance. Following the amount that Adam’s team was able to eat of the 190-pound burger in 2009, this burger could feed over 400 people.

What an 1,800 pound burger looks like | Courtesy of Mallie's Sports Grill & Bar

If you don’t have 400 people to invite, they also have a 10-pound burger for a more appropriate but still incredibly difficult one-person challenge.