This Man Makes Guitars out of Detroit’s Landmarks 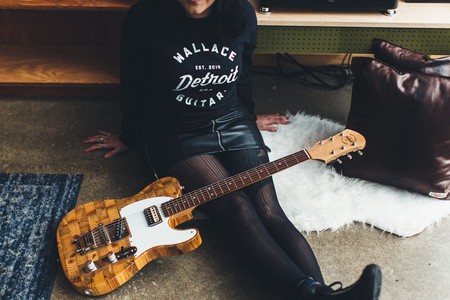 While painful yet fascinating urban decay has almost become a hallmark of Detroit, there comes a time when old landmarks need to make way for new development. However, that doesn’t mean a piece of them can’t live on, as has been proven by enterprising Detroiter Mark Wallace. 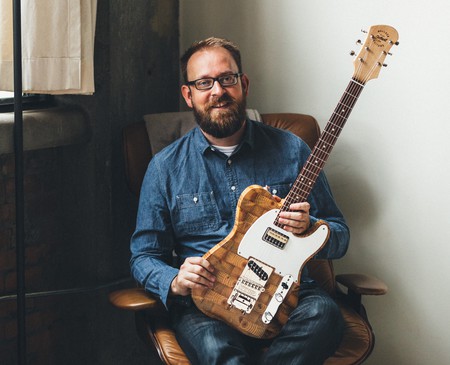 After touring a reclaimed wood warehouse, he had the idea that guitars made from salvaged wood from iconic Motor City buildings would be kind of cool and fitting for the city’s history of ingenuity in manufacturing and music. With no ambitions beyond making one or two guitars, he did some research and enlisted the help of a University of Michigan professor who worked with digital wood-cutting technology. After the success of the prototype, Wallace won an arts grant in 2013 that made him realize his cool idea could become his livelihood.

With no experience with guitars beyond playing them though, turning Wallace Detroit Guitars into a successful business has not just been the work of Mark but of a wide group of talented people. We caught up with him to find out about his relationship with Detroit, how the business has grown, and who he’d love to see playing one of his guitars.

You’ve had a pretty varied career. Can you tell us a little about what came before Wallace Detroit Guitars?

I came to Detroit in 1999 to work as a high school English teacher. I spent a lot of time with my students driving around to track meets and basketball games, and that’s how I got to know Detroit. I studied public policy at the University of Michigan and spent a ton of time with bands in Ann Arbor, Ypsilanti, and Detroit. After grad school, I took a job with a real estate company in Detroit, and that’s how I got more interested in trying to find a productive use for the abandoned buildings in the city. 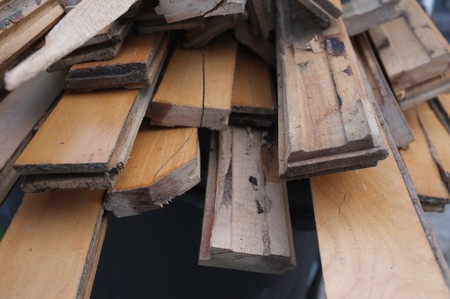 Had you made guitars before you had the idea for Wallace Detroit Guitars? How did you go from playing guitars to making them?

I hadn’t made a guitar before I launched Wallace Detroit Guitars. I had spent my whole life playing guitars and digging around pawn shops and guitar stores, so I knew what I liked. But I had to assemble a team to make these guitars work and to make sure that the guitars we produce are something we can be proud of. I started building that team by reaching out to friends who were players and other musicians who had modified their instruments. Those conversations led me to the people who have worked on these instruments.

Are you a native Detroiter? Was it important to you to create a business that is uniquely Detroit and contribute to the city’s comeback?

I grew up in small farm towns around Michigan and spent two years in Georgia when I was a kid. I moved to Detroit in 1999 when I graduated from college. I have spent my whole career living in Detroit and working to make Detroit a great city. My family has deep roots in Detroit, going back to the early 1900s. And many of my ancestors were also Detroit Public School teachers.

How has the company grown over its four years? How many people are involved?

Wallace Detroit Guitars has grown a lot in four years. We’ve sourced wood from at least 10 buildings and introduced the offset model in 2017. Our reach keeps expanding every year, with sales that generally started in Michigan and have spread out all over the globe. We’re currently prototyping a bass, and we’ll keep adding functionality and tweaking our instruments based on the feedback we get from customers. Currently, we have around 10 people who are involved in the business.

Tell us about the process of acquiring the wood and how long it takes to finish a guitar.

We source our wood from a non-profit organization called Architectural Salvage Warehouse of Detroit. They hire local Detroiters to deconstruct vacant properties that are beyond repair, and they inventory and de-nail each board. The wood is then planed and glued into a “flat” which is about 1.75 inches thick and slightly larger than a guitar body. The flats are then cut down with CNC or with a router into the shape of an instrument. We have a team that makes our necks by hand, and we have a team that hand-winds the pickups and installs the hardware after the bodies are finished in a spray booth. The whole process takes four to six weeks, depending on the type of wood and how it responds to the finish material.

How many Wallace Detroit Guitars are out there? Do you have any favorites from memory?

We have made nearly 150 guitars since we launched. My two favorites are one that I gave to my mom, with a Stets tremolo on it and a humbucker in the neck position. The wood goes through the core of the tree and has a pattern in it that looks almost like a human eye. I also love the first and only guitar we’ve done with two P90’s. It’s a ton of fun to play, and it’s one of the first series we did with the end-grain “cap” and the long-grain back. I love it.

Have you had any famous customers? Is there anyone you’d get a kick out of seeing playing one of your guitars?

We haven’t had any particularly famous customers. But Billy Bob Thornton came by our booth at NAMM and loved our work, and Kathy Kinney who played Mimi on The Drew Carey Show stopped by. Kathy’s the nicest person in the world, and Billy Bob was super fun to talk with. I’d love to see Jack White playing one of these. He’s a genius, and I love his music.

Are there any buildings in Detroit you’d really like to get wood from?

I’d love to get some wood out of the John Kronk Gym that recently burned down.