The Story of Jimmy Hoffa and Detroit’s Most Famous Disappearance 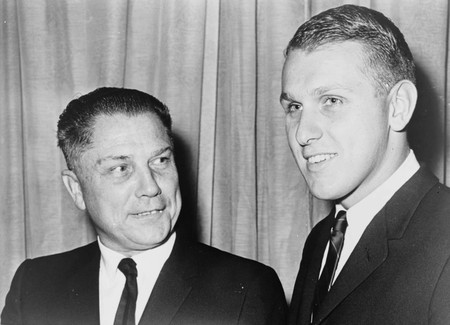 Jimmy Hoffa with his son James in 1964 | © John Bottega / WikiCommons

On a summer’s day in 1975, former labor union leader and convict Jimmy Hoffa rang his wife from outside a restaurant north of Detroit after his associates had failed to show for a meeting. He told her that he would wait a little longer and hung up. He was never seen or heard from again, and his disappearance has become as infamous as any in U.S. history.

Born James Riddle Hoffa on Valentine’s Day 1913, he moved to Detroit in 1924 and left school at 14 in order to provide for his family. Despite his young age, he quickly became involved in unionizing, organizing a labor strike at a grocery store to improve wages and working conditions. He soon left labor work to join the Detroit chapter of the International Brotherhood of Teamsters (IBT), a national labor union formed in 1903 which had around 80,000 members at the time. 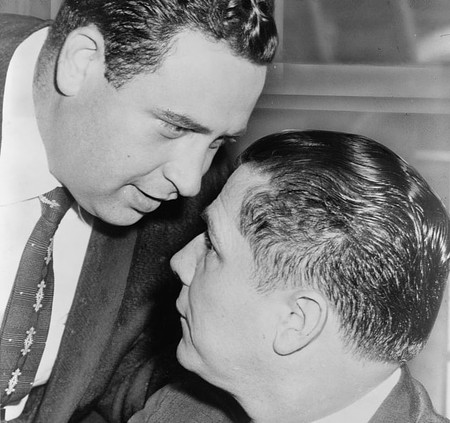 Throughout the 1930s and ’40s, Hoffa worked to grow the union, and by 1952, he became the national vice president. He took the presidency five years later when his predecessor was convicted on fraud charges; by that time, the organization had 1.5 million members. The peak of Hoffa’s career came in 1964 when he brought almost all of the truck drivers in North America under a single contract, the first national agreement for Teamsters’ rates. However, the same year, his criminal dealings finally caught up with him. His work in growing the union had gone hand in hand with organized crime, and the government had been relentlessly pursuing him since the 1950s.

He was convicted of jury tampering, attempted bribery, and fraud in two separate trials and sentenced to 13 years in prison, which he started serving in 1967 after several unsuccessful appeals. With less than five years served though, he was pardoned by President Richard Nixon. As part of his release, Hoffa was banned from any union activity until 1980, a condition he unsuccessfully tried to fight. Despite losing most of his support within the Teamsters by then, he kept working to re-establish himself within the union.

Jimmy Hoffa with his son James in 1964 | © John Bottega / WikiCommons

On July 30, 1975, Hoffa disappeared. He had told several people he was going to meet Mafia leaders and IBT members Anthony Giacalone and Anthony Provenzano at the Red Fox restaurant in Bloomfield Township, and his car was found in the parking lot after his wife reported him missing that evening. Both men denied ever arranging a meeting though and were not near the restaurant at the time of his disappearance.

He was declared dead in absentia on July 30, 1982, but the case remains open. Indeed, many theories of what happened to Hoffa abound. Most believe he was murdered by mob bosses opposed to him rejoining the union. In subsequent years, a number of books and individuals have claimed to know what happened to Hoffa, and in recent years, tip-offs have led police to supposed burials sites under a driveway in Detroit and a property in Oakland Township owned by a Detroit mob boss.

“While working men and women have long known the value of a dollar—it is a lesson well taught to one who labors for a living—it has taken a long, long time to teach employers the value of a human being, and in many cases has not yet been successfully taught. Few give thought to what happens to displaced workers, but they can analyze to the penny what the profits will be.” –James R. #Hoffa Each year in February, #Teamsters take a moment to reflect upon and remember a leader who changed the course of history for working men and women in America. James R. Hoffa, born February 14, 1913, served as General President of the Teamsters Union from 1957 to 1971. In that time, he inspired thousands to stand up and let their voices be heard. His words, spoken more than 50 years ago, resonate just as profoundly today as they did then. As General President, Hoffa honed his well-earned reputation as a tough and effective bargainer, and gained the respect of labor and business leaders alike across the country. He worked hard to expand the number of working men and women who were protected by union contracts and, under his leadership, the union’s membership rose to include more than 2 million workers. Hoffa’s crowning achievement was the 1964 National Master Freight Agreement, which united more than 400,000 over-the-road drivers under one contract. This contract, a feat that had been declared virtually impossible by many, lifted more workers out of poverty and into the middle class than any other single event in labor history. Congressman Elmer Holland (D-PA) was quoted as saying, “Jimmy Hoffa has put more bread and butter on the tables for American kids than all his detractors put together.” #1u #unionstrong

Hoffa was survived by his wife of nearly 40 years, Josephine, and two children. His son James has followed in his father’s footsteps, serving as an attorney for the Teamsters from 1968 to 1993, and as its president since 1999.