The Best Festivals in Lansing, Michigan 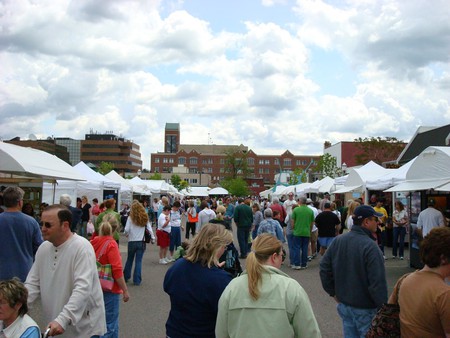 Throughout the year, a variety of fun and cultural festivals held in Lansing provide locals and visitors alike the opportunity to experience something a little different. Music, cinema, science, food, and drink are all celebrated at events across the capital city, with many of them free or inexpensive ways to support the community. Here are just some of our favorites.

The Common Ground Music Festival is mid-Michigan’s premier outdoor music event, taking place every July since 2000. Held in Adado Riverfront Park, it regularly features impressive headline acts of all genres, from rock and pop to country and hip-hop. The 2018 event will be on July 5–8, with weekend tickets starting at $79. Alongside the music, activities include zip-lining across the Grand River.

Despite being named as a film festival, the Capital City Film Festival (CCFF) is, in fact, a multimedia showcase of both independent films and live music. Across 10 locations around Lansing, including The Robin Theatre and the Impression 5 Science Center, there are more than 100 films and 30 musical performances from which to choose. Tickets can be bought for individual film events or concerts, with an all-access pass costing $50.

The MSU Science Festival is a free multi-day series held throughout April, featuring events such as tours, expert speakers, expo zones, open houses, and after-hours museum nights, all exploring the power of STEAM (science, technology, engineering, arts, and mathematics). With over 200 activities in total, the festival expands beyond the MSU campus to include events in Michigan cities such as Detroit, Ann Arbor, and Grand Rapids.

Put on by the Michigan Institute for Contemporary Art, Lansing JazzFest brings thousands of jazz fans to the streets of Old Town each August for two free days of music. Three stages of music are joined by a range of food options and crafts vendors, and there’s an emphasis on providing interactive activities for kids of all ages. The 24th annual Lansing JazzFest will take place Friday, August 3 and Saturday, August 4, 2018.

Sister to the JazzFest, the Michigan BluesFest originally started in 1994 as an OktoberFest before moving to September and changing its name. Over 5,000 people from across Michigan and nearby states gather to see more than a dozen local favorites and regional and national acts for free, though for $5 you can enjoy a prime location in the Turnaround Lounge to watch both main stages.

The East Lansing Art Festival started all the way back in 1964 as a sidewalk art sale for a club at Michigan State University. Over the subsequent half a century, it has evolved into a major community event featuring hundreds of artists, performers, and craftspeople and attracting tens of thousands of visitors during its two days.

Beerfest at the Ballpark

In its 5th year, Beerfest at the Ballpark is a one-day beer festival held at the Cooley Law School Stadium, home of the Lansing Lugnuts. Try more than 300 craft beers from over 50 Michigan breweries, including rare beer tastings, as well as ciders, meads, and spirits. A $32 ticket buys you a glass and 10 three-ounce pours. The event takes place on April 28, 2018.

The eighth annual Mighty Uke Day festival will take place over a weekend in May 2018 in Old Town, once again celebrating the “diminutive yet dynamic” ukulele. Over its life, it has featured many of the world’s top ukulele players, and as well as the performances, there are workshops, group strums, and children’s activities. Tickets for concerts and workshops can be registered for online.

The Apple Butter Festival—put on by the Fenner Nature Center for more than 40 years—is a real celebration of autumn. Get involved by stirring and tasting the butter, playing heritage games, carving pumpkins, and seeing blacksmiths, potters, and other artisans demonstrate their crafts, all while local musicians perform. The festival is free. However, all proceeds support the Center, so make a donation.