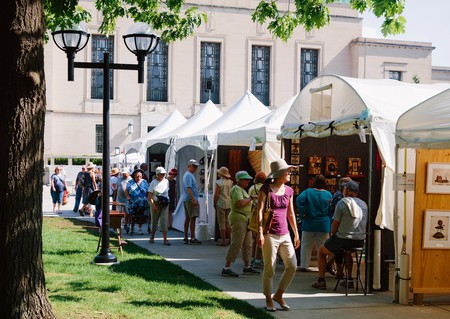 Ann Arbor is home to a number of outstanding festivals celebrating everything from music and art to cinema and literature. Across downtown and the University of Michigan campus, these events take place every month of the year. So, be sure to check whether you can catch a one-day book festival or drop in on a month-long summer festival when you visit. Offering something for everyone, these are the best festivals in Ann Arbor.

Featuring a wide range of performances, activities and exhibitions organized by the City of Ann Arbor and the University of Michigan, the Ann Arbor Summer Festival is as much a celebration of the city itself as it is a music, dance and art festival. Indoor and outdoor programs are held at various venues over four weeks in June and July. Indoor events are ticketed and outdoor events (such as concerts, movies under the stars and unique pop-up events) are free to all.

The crowd that came out to see the Japanese Godaiko Drummers are almost as amazing as the drummers themselves! Thank you to @tdameritrade for sponsoring!

Featuring the best dramas, comedies and documentaries from the world’s top film festivals, the Cinetopia International Film Festival is the premier independent film festival in southwest Michigan. Its home is the Michigan Theater in Ann Arbor, but events are also held at a number of theaters around Detroit and Dearborn, with talks and parties alongside. Sometimes there’s even exclusive access to the best films from festivals including Sundance, SXSW, Tribeca, Toronto and Cannes.

The Kerrytown BookFest takes place on a single packed day every September. The celebration of books, those who create them and those who read them features various events, including panels, readings and signings, alongside book-themed booths from local artists, retailers and authors. Look out for writing workshops throughout the summer too.

With a reputation as a counterculture hub since the 1960s, Ann Arbor is rightly home to a longstanding folk festival. The Ann Arbor Folk Festival has taken place every January for over 40 years, and now calls the University of Michigan’s Hill Auditorium home. Over two days, more than 10 national and regional acts play, and all funds raised benefit The Ark, the city’s non-profit home for folk, roots and ethnic music.

We miss you already, but thank you so much for coming and supporting us. Truly grateful and we’ll see you at The Ark. #a2folkfest #livemusic #findyourfolk #a2ark #hillauditorium #tilnextyear

Taking over almost all of downtown for three days every summer, the Ann Arbor Art Fair is one of the city’s signature events. Combining four art fairs into one big event, its streets become an art lover’s paradise, with hundreds of artists and thousands of visitors enjoying original works of art, street performances, music stages, culinary treats and arts and crafts for sale. The Art Fair is, for many Ann Arbor residents, the highpoint of the year.

If one great film festival wasn’t enough, Ann Arbor has two. The Ann Arbor Film Festival is also the oldest avant-garde and experimental film festival in North America, being founded in 1963. The six-day event is action packed, with 40 programs showing more than 180 films from over 20 countries. There are also panel discussions, installations from contemporary artists and juried competition programs.

From the film screenings and special programs to the afterparties, check out the photos from the 56th festival week on our #flickr page! https://flic.kr/s/aHsmhPwQy8 (PC: Carter Sherline)

Another event channelling that counterculture spirit, the annual Hash Bash has been held on the first Saturday of April since 1972, to champion the goal of reforming federal, state and local marijuana laws. Join a crowd of 10,000 at the heart of the University of Michigan campus for speeches, live music, street vending and “occasional civil disobedience”.

THANK YOU to everyone that came out over the weekend to support #hashbash !! It was a beautiful day spent with awesome people. See you next year!! #milegalize #cannabis #annarbor #annarborhashbash