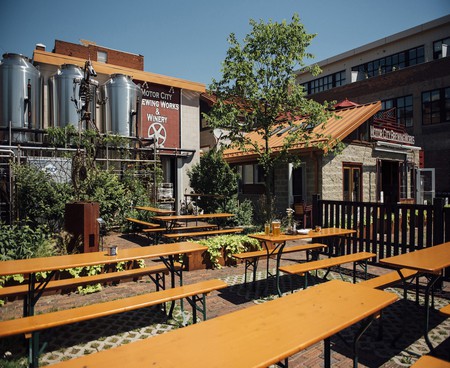 In a city as dispersed as the D, a bar crawl could involve some serious mileage, but that’s no reason to despair. Following our directions, you can take in breweries, pubs, speakeasies, dive bars, cocktail lounges and jazz clubs, all in one day and using nothing but your feet and one quick journey on public transport. So eat a big meal, get hydrated and let’s do this.

Any bar crawl is best started with beer, and there’s no better beer in Detroit than the beer made right here. One of the oldest microbreweries in the city is Motor City Brewing Works on Canfield Street in Midtown. Famed for its popular mild ale, Ghettoblaster, its taproom has many rotating beers and also serves great pizza. As does the Jolly Pumpkin Pizzeria & Brewery across the road, one of several locations for the Michigan brewery which specializes in sour beer. Your third option on that block is the Traffic Jam & Snug, another brewpub with a small range of house brews.

Sticking with beer, head east on Canfield for two blocks and arrive at the HopCat. One of the city’s best bars for beer, especially local varieties, it has 130 craft beer taps, the largest selection in Michigan. Right outside the HopCat on Woodward Ave is a stop on the new light rail QLine, so hop on that and head downtown. Get off at the Congress St stop and you’ll find the Grand Trunk Pub, a converted railway station from the early 20th century with another strong selection of Michigan beer.

It’s time for something different, so how about a cocktail? Downtown is a great place to find one, so walk north on Woodward through Campus Martius. If you want something unique and experimental, take a left at State St and then right on Griswold and you’ll locate the Bad Luck Bar, known for high-end creations and the city’s most expensive drink. Alternatively, head to the Belt, an alley dedicated to public art and home to The Skip, which has more straightforward but popular frozen cocktails.

By this point, we’re definitely in need of hunkering down with some long drinks, so for a taste of prohibition-era Detroit, how about somewhere with a speakeasy vibe? Again, there are a number of options. You could head back south to find The Keep on Congress St, a cool underground joint with a fully stocked bar, or go west to the more famous Cafe D’Mongos Speakeasy, a slightly more chaotic dive bar option which is only open evenings from Thursday to Saturday.

Our final move is to find some live music to enjoy alongside our final drink (or two). Cafe D’Mongos does have live music, but for something a little different, head north up Woodward and left at Park Ave to Cliff Bell’s jazz club, which has been around since 1935 and has live music til late almost every night of the week.