Taking Art to the Streets: The Best Public Art in Detroit 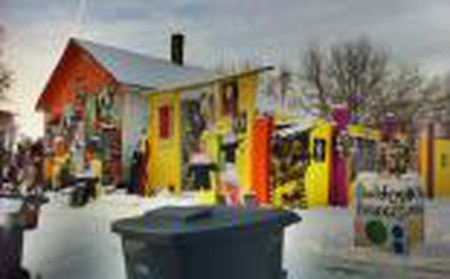 The Detroit area is home to numerous significant works of public art in its parks, neighbourhoods, libraries and schools. From backyard exhibits to transit systems, the best examples of public art in Michigan are a means of fostering growth and creativity within struggling communities, and are a reflection of the varied makeup of this state. 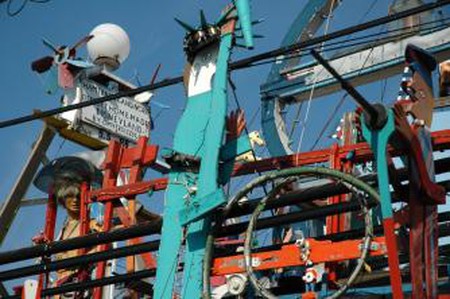 Hamtramck Disneyland is an installation owned and created by a retired assembly line worker named Dmytro Szylak. The work stands as a celebration of Szylak’s American, Ukrainian and German heritage. It first began in 1992 when Szylak had retired from General Motors and was in need of a hobby with his newfound spare time. The structure grew into a towering assemblage of hand-carved and found objects, two stories tall between the two garages of the retired Ukrainian autoworker. The carnival-themed installation contains a compilation of objects; some old, some new, and some bought, while Szylak handcrafted others. Whilst the overall composition was finished in 1999, the artist continues to occasionally add to the collage. 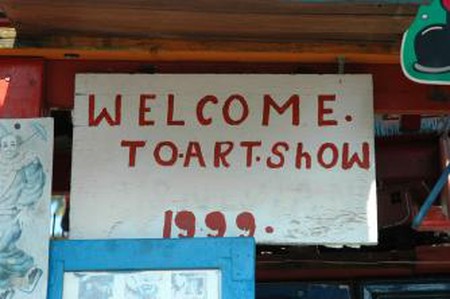 This remarkable piece of art is understood to be Dmytro Szylak’s own personal interpretation of Disneyland. The diverse sculpture contains many symbols of American patriotism, bold paint colours, press clippings, a picture of Elvis along with other pop culture stars, year round Christmas lights and wooden soldiers armed with toy guns. It is a testament to Szylak’s construction that the piece has survived the harsh Michigan winters. 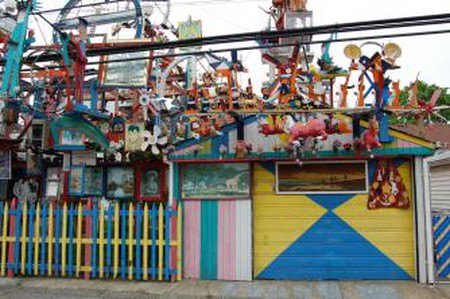 When he first decided to transform his 30ft backyard into a work of art, Szylak faced many difficulties. Neighbours and city officials were against the idea of constructing something so vast on a garage rooftop. Since then, the mayor of Hamtramck has honoured Szylak and his artworks have been displayed in many local art shows. Hamtramck Disneyland also provided the backdrop for a Women’s Wear magazine shoot in 2006, with photographer Bruce Weber and model Kate Moss. A tourist destination in its own right, a sign within the piece says ‘Welcome to the Art Show’, and it really is an exhibition which explores the notion of being American.

Street artist Kobie Solomon’s Chimera project is painted on the Russell Industrial Centre and is possibly one of the largest pieces of spray can art in the world. At nearly 10,000 square feet, Solomon’s goal is to change the look of Detroit, one wall at a time. The Russell Industrial Centre is the Midwest’s largest art mecca and the mural aims to represent the majority of the creative activities happening at the Russell on a daily basis. A Chimera is a mythical animal made up of parts of other animals, and Solomon explains the concept as representing Detroit’s ‘four major sports teams, as well as parts of Detroit’s artistic community’. Eric Novack of the Russell Industrial Centre, says that the mural will act as ‘a big welcome sign to Detroit’. As the Russell was once an auto parts manufacturing facility, a Chimera is the perfect symbol as ‘impossible dream’ as the building is now one of the largest incubators in the country for creative arts. 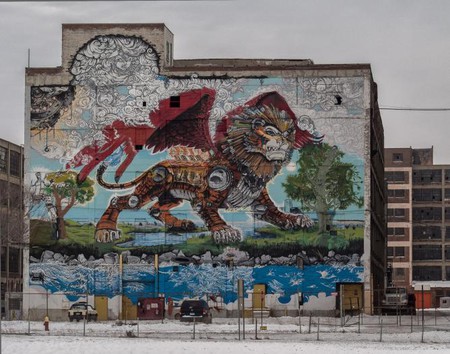 The Detroit Industry fresco cycle was conceived by Mexican muralist Diego Rivera as a tribute to the city’s manufacturing base and labour force of the 1930s. Rivera completed the 27 panel works in 11 months from April 1932 to March 1933. It is considered the finest example of Mexican mural art in the United States, and Rivera himself thought it was the best work of his entire career. As a Marxist, Rivera believed that art belonged on public walls rather than private galleries. The vast size of the medium of fresco allowed the artist to explore epic and complex themes which would nevertheless be accessible to a large audience. 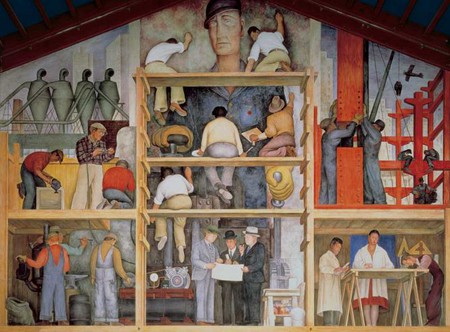 The two main panels on the North and South walls depict labourers working at Ford Motor Company’s River Rouge Plant. Many people objected to Rivera’s work when it was unveiled to the public. The artist painted workers of different races and ethnicities all working side by side and this was considered rather controversial at the time in such a public realm. Other panels depict advances that had been made in various scientific fields, such as medicine and new technology. The series of murals, taken as a whole, represent the idea that all actions and ideas are one, and Detroit as a burgeoning city is representative of the entire world. 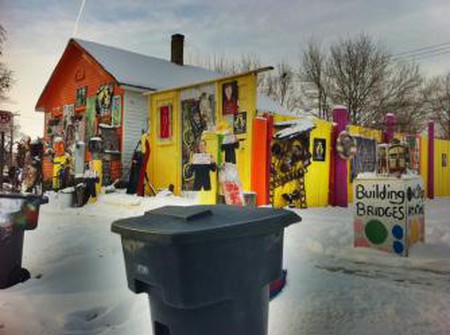 The Heidelberg Project is a non-profit organisation that began in 1986 by Detroit artist and resident Tyree Guyton. Now in its 28th year, the project is best described as ‘an outdoor community art environment’, and has established its reputation as one of Detroit’s most famous art projects. The focus of the Heidelberg Project has always been rooted in the need to improve the under-resourced and terribly blighted Detroit community where the project was founded. 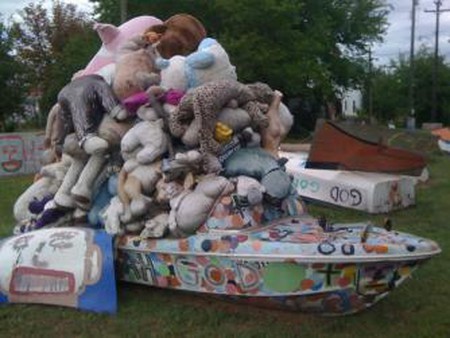 Receiving over 275,000 visitors annually, the open-air environment is a cultural village of sorts, and transforms unused houses into works of art. Located at the heart of an urban community in Detroit’s East Side, its mission is to improve the lives of people and neighbourhoods through art. By inspiring people to use and appreciate artistic expression, the organisation hopes to bring about greater social and economic health for the entire community. Guyton uses everyday, discarded objects to create a two-block area in which creativity prevails in transforming the lives of the community. 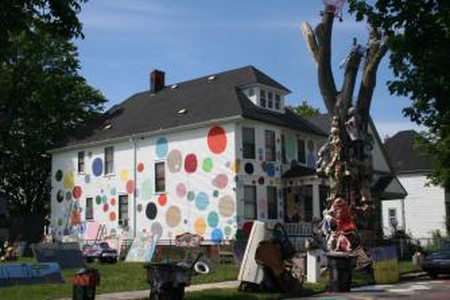 The theory of change for the Heidelberg Project begins with the belief that all citizens, from all cultures have the right to grow and flourish within their communities. Guyton and the rest of the organisation hold a strong belief that any community can re-develop and sustain itself by embracing ‘diverse cultures and artistic attributes’ as the foundations for an economically viable and fulfilling way of life. With a strong emphasis upon art in education, the Heidelberg Project works to ensure that students continue to receive art as a key component in their educational experience; conducting various art education programs throughout schools. 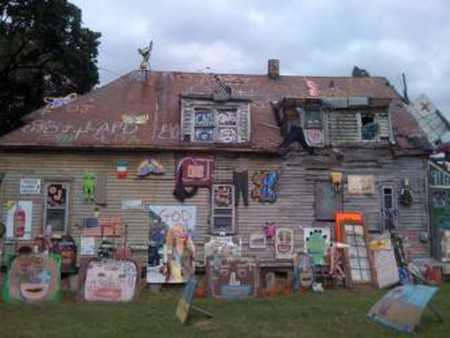 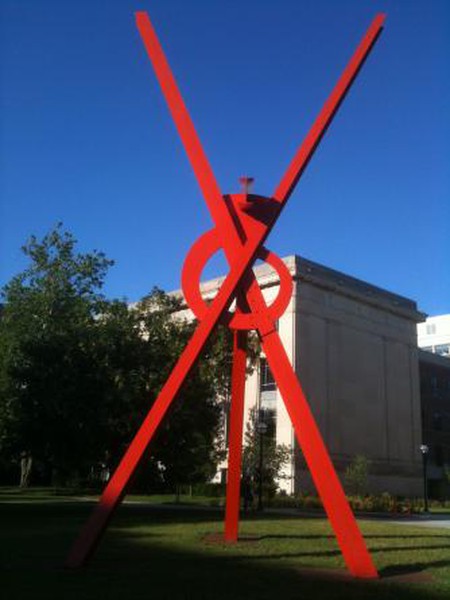 The head of the ‘cultural village’ is the House That Makes Sense Centre (HTMS). The HTMS includes an exhibition space, artist-in-residence space, a library, a children’s workshop and more. The University of Michigan Associate Professor of Landscape Architecture, Beth Diamond, heads the design of the HTMS centre. 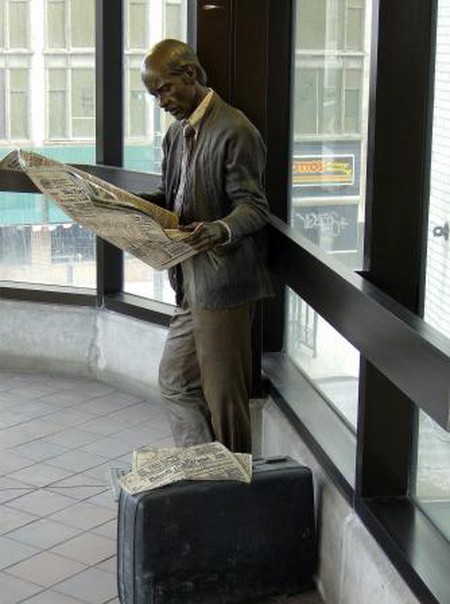 The ‘Orion’ sculpture by Mark de Suvero is a giant red sculpture located on State Street in front of the University of Michigan Museum of Art and installed in October 2008. Associating itself with the institutions rich history, the sculpture is located within a triangle of the university’s most recognisable buildings – the Michigan Union, Law Quad and Angel Hall. Named after the hunter from Greek mythology, the orange structure contrasts against the blue sky like a constellation. Marrying art and engineering, the work’s three legs give the piece its literal and metaphorical stability. Projecting wildly into space, the piece’s structure provides inspiration to university students, representing Michigan’s future as a strong and dynamic beacon.

The Detroit People Mover is a 2.9 mile automated people mover system that operates on a single set of tracks and encircles downtown Detroit. Owned and operated by the Detroit Transportation Corporation, it is an important asset for business travelers, tourists, residents and downtown workers. The People Mover stations not only showcase the locations of the downtown area, but they are also unique attractions themselves. Each of the thirteen stations has one or more significant artworks.

Today, riders can experience 18 different examples of unique public art along the nearly three-mile People Mover loop. All but one of these pieces can be viewed without exiting the fare gates, so visitors can hop on and off as they explore the artwork for just 75 cents a ride. Every station’s art has a story to tell, each uniquely connected to Detroit in some way. For example, Pewabic Pottery founder Mary Chase Stratton originally created the green tiles at the Cadillac Centre Station in 1935 for use at a Stroh’s Brewery. The piece was created by artist Diana Kulisek and is aptly entitled In Honour of Mary Chase Stratton. Other highlights include the lifelike statue Catching Up, created by artist J. Seward Johnson Jr. The work at Grand Circus Park Station depicts a suited man reading a newspaper, the mould of which was originally modelled on the actual forms of the publications the Detroit News and Detroit Free Press.