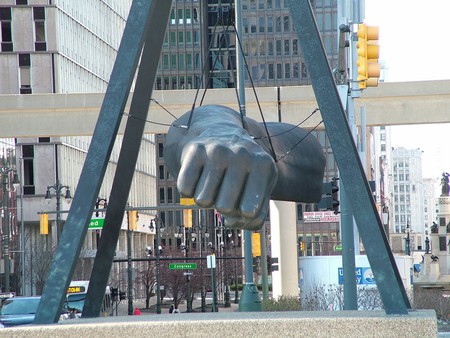 Joe Louis is a prominent name in Detroit, from the giant arm and fist sculpture in the center of Jefferson Ave at Hart Plaza to the soon-to-be-demolished Joe Louis Arena. But how did this boxer from Detroit have such a cultural impact that he is widely regarded as America’s first African American hero?

Joseph Louis Barrow was born in rural Alabama in 1914 and moved with his family to Detroit at the age of 12 as part of the Great Migration. In the wake of the Great Depression, he took up boxing at a local youth recreation center in Brush Park. Legend has it that in order to appease his mother, who wanted him to take up the violin, Joe would carry his gloves in a violin case.

He made his amateur debut in early 1932 at the age of 17 under the name Joe Louis, which was to either hide his boxing from his mother or because his writing was so big that there was no room for his full name. Either way, the name stuck, and Joe Louis had a formidable amateur career as a light heavyweight, winning a number of Golden Gloves competitions in Detroit and Chicago and becoming the United States Amateur Champion at the United States National Boxing Championships in 1934.

Louis made his professional debut in Chicago also in 1934, knocking out his opponent in the first round. By the end of the year, he had fought 12 times and won them all, including 10 knockouts. Despite the racial tension in the U.S. at the time, Louis’s stock continued to rise thanks to both his success in the ring and his carefully maintained public image. When he knocked out the Italian former world heavyweight champion Primo Carnera in mid-1935, his success was politicized for the first time, being painted as a victory over the fascist regime of Mussolini, earning him the nickname “The Brown Bomber.” 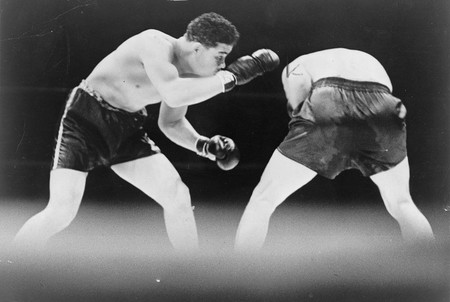 Joe Louis and Max Schmeling in 1936 | © Library of Congress/WikiCommons

By the following year, he was the number one contender in the heavyweight division with a record of 27–0. His final warm-up bout was against German Max Schmeling, a former world champion considered to be past his prime. Louis again became a symbol of the struggle between democracy and fascism, but poor preparation led to the first loss of his career. Despite the loss, Louis still got his title shot and promptly knocked out James J. Braddock to become world heavyweight champion.

His mind immediately turned to a rematch with Schmeling though, especially as the Nazi Party had declared the first fight as a sign of Aryan superiority. Ahead of the fight in 1938, Louis was personally told by President Franklin D. Roosevelt of the importance of the boxing match, with Louis quoted as saying that “the whole damned country was depending on me.” Over 70,000 people turned out for the fight in New York, but they didn’t see much as Louis pulverized Schmeling in just two minutes. Louis was a national hero, defending his title many times before enlisting in the Army following Pearl Harbor. His patriotic acts and words while serving in the Special Services Division during World War II meant the country embraced him as they had no African American before. 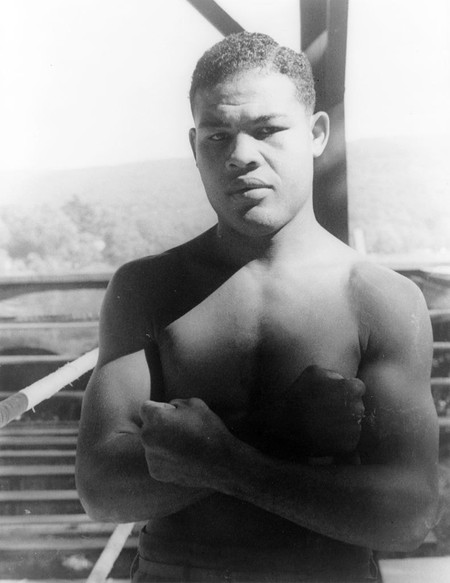 After the war, Louis defended his title several more times before retiring in 1949. Financial troubles forced him into a number of disappointing comebacks in the early 1950s, but his reputation remained intact, with him still considered one of the greatest heavyweights of all time. He even played a role in removing a “Caucasian only” bylaw in the PGA of America.

Following his death in 1981, President Ronald Reagan said of Louis, “His career was an indictment of racial bigotry and a source of pride and inspiration to millions of white and black people around the world.”

Detroit’s Monument to Joe Louis was created in 1986 by sculptor Robert Graham, while the Joe Louis Arena was home to the Detroit Red Wings from 1979 to 2017.