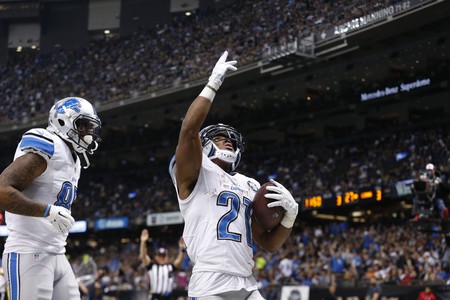 Detroit Lions running back Ameer Abdullah enjoys a little pain and adversity. He favors wearing long sleeves or a hoodie—sometimes both—under his jersey when it’s hot out. Why? Well, if he can handle tougher conditions, playing on a normal day will be easier.

Abdullah, who was raised Muslim, has similar sentiments regarding Ramadan, the holy month of fasting, introspection and prayer for followers of Islam. While many concerns for Muslim athletes are centered around a depletion of nutrients, dehydration or stunted performance due to fasting—no food or water from sunrise to sundown—Abdullah is focusing on its positives.

“It gives a lot of Muslim athletes an opportunity to focus on your mental toughness and discipline,” he said. “At the close of Ramadan it’s always good for me because I’m at my best state mentally. This year, it’s great that it’s during OTAs (organized team activities) and ends right before training camp because it allows me to go into camp mentally strong and with a clear mind.”

Abdullah, who turns 24 on June 13, has fasted every Ramadan except 2015, when it coincided with his first NFL training camp with the Lions after being selected in the second round (No. 54 overall) in the NFL Draft. Seeking the advice of his father who is an imam, Abdullah was told he could be exempt from fasting since he was beginning a new journey. He made up the time following his rookie season, fasting every other day to reach his 30 days.

Children, the elderly, the sick, women who are pregnant or nursing, or those traveling or on a journey don’t have to fast during Ramadan, as long as they make up the time at a later date.

Abdullah, 5-foot-9, 203 pounds, may be fasting every other day when Ramadan begins the evening of May 26 because he is recovering from a foot injury suffered on Sept. 18 that ended his 2016 season.

“I’m still progressing and it’s all about getting the right vitamins and minerals in my body to help it heal,” he said. “I’ll talk to my father about it.”

Because Muslims aren’t allowed to eat or drink anything from sunrise to sunset during Ramadan, providing your body with a day’s worth of nutrients is essential, especially for an athlete. Abdullah is a big pasta eater as is, but his consumption increases exponentially during Ramadan. He’ll wake up at approximately 5 a.m. to eat breakfast—pancakes, eggs, turkey bacon, typical breakfast food … and pasta.

“Just noodles with whatever sauce—usually marinara,” he said.

The Lions running back also consumes salt tablets in the morning and at night to help his body retain water. When he stops fasting at night, he’ll have his normal dinner—protein, minerals, carbs—and pasta. He aims for 2-3 servings to replenish his body from the prior day and keep it fueled until morning.

He also said he naps more frequently during Ramadan to help his body recover and to avoid any temptation from sitting around staring at the clock (or teammates eating).

“I’ve been doing it my whole life so I’m kind of used to it,” Abdullah said. “The effects are expected, so I understand where I really have to dig deep and push through. The first week or two is tough because your body has to get used to breaking the habit of eating.”

If he ever feels weak at the gym or in practice, or in the need for water or food, Abdullah occasionally reflects on why he and the one billion Muslims around the world are doing what they’re doing for 30 days each year.

“Sometimes you think about the purpose of what fasting means,” he said. “Ramadan means a lot more than just not eating—it’s purifying your soul, it gives you an opportunity to sit back, think about holy things, things that are going to be wholesome for you. It makes you dig down, remember who you are as a person and focus on things important to you.”