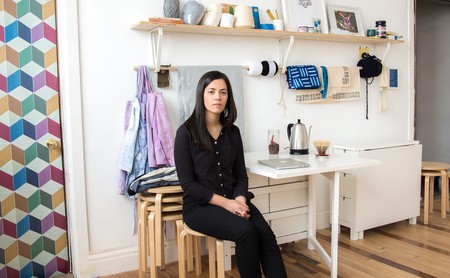 Adopted Detroiter Ali Lapetina has made documenting, collaborating with and promoting a greater understanding of underrepresented communities the focus of her career to date. Over the past four years, she has been closely working with the women and girls of the Bengali community in Hamtramck as part of an organization she founded called Women of Banglatown.

Attracted by the evolving landscape and raw energy of the city, Ali moved to Detroit in 2008 to study at the College for Creative Studies, with aspirations at first of becoming an art director but soon transitioned into documentary photography. After graduating in 2013, she met a family who had moved to Detroit from Bangladesh and began photographing their community and learning about their way of life. She quickly realized that many of the girls and women did not have safe gathering places outside of their homes and schools in the same way that men and boys did, and resolved to create an organization that provided them with a neighborhood place to call their own.

She started Women of Banglatown in 2014 to provide a community space for women as well as free art programming for girls and income-generating activities for immigrant women. With the organization recently expanding into offices at Woodward Throwbacks, we spoke to Ali about its progress and that of the community, and her career outside of Banglatown. 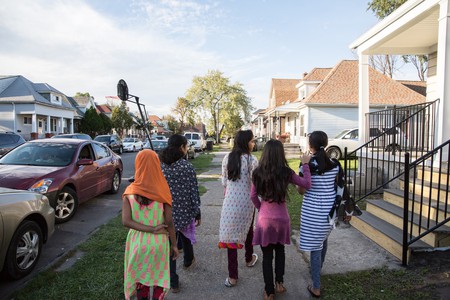 Some of the girls in the organization | © Ali Lapetina

What attracted you to photographing the Bengali community in the first place?

I started photographing the Bengali community five years ago after meeting a woman and her daughters who had resettled in Detroit from Sylhet, Bangladesh. We spent the summer together, learning about each other’s way of life.

What inspired you to go from recognizing an issue to doing something about it? Was it a natural progression for you to move from artist to community leader?

When I reflect on this moment now, I see how my own life experience had influenced the mission of my work. When I was 16, I was uprooted because of my parent’s divorce. A women’s center in our town gave me, my mother, and sister a place to live for a few months while my mom got back on her feet. The importance of a safe space for women was something that was incredibly helpful to my family, and I recognized a similar need within the Bengali community, which is one of the reasons why I started Women of Banglatown.

Starting the organization was an extension of the time I was spending with the girls and women. I believe that being an artist and a community leader should be intertwined, especially when there is a long-term project that requires dedication to a community. When I started Women of Banglatown, I was young and a recent graduate. I was teaching art to youth all around Detroit through the organization Community Arts Partnership, so when I noticed a lack of gathering places for girls and women from the Bengali community, it was a natural progression for me to initiate a project around art. 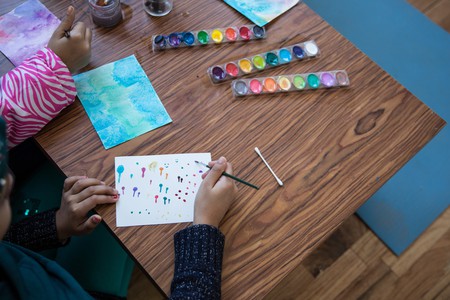 How has your role evolved over the years since you started the organization?

My main focus is how the organization can grow and sustain itself for years to come. My role as the art teacher has evolved into becoming a stronger director so I can expand our programming and diversify our community outreach. I still love teaching workshops, but as I have grown up alongside many of these girls and women, I want them to have the opportunity to learn and collaborate with other local artists, teachers, and volunteers.

I have started to think about the future of the organization now that I see how important it has become to the girls and women of this community.

Were the community members you were targeting immediately receptive to the idea? How has the organization’s membership changed since 2014?

I never really targeted community members; I simply spread the word about free art classes. In the beginning, the girls just started hanging around and inviting their friends to join. We hosted free art classes in an alleyway behind an urban farm, and a year later, we repaired a vacant garage behind it that became our home for two and half years. This past summer we moved into a year-round space located inside Woodward Throwbacks. Over the past four years, we went from having 8–10 girls to now roughly 15–20 girls. The organization also works with a handful of women from the community to create woven and textile goods that they sell inside of the Woodward Throwbacks showroom. 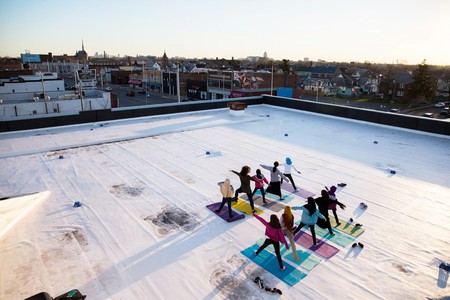 Yoga on the roof | © Ali Lapetina

What are the main obstacles you have faced?

Operating costs are the biggest obstacle. We recently become a 501(c)(3), so we can start to raise money to host programming year-round and collaborate with local artists to teach workshops. The response and support from the community have grown, and I want to continue to provide workshops and events. Another struggle is parents allowing the girls to attend. Some girls want to come, but they can’t because they have to help around the house. It’s a balance we face as an organization—respecting the community and their culture while also educating them on the importance of a women’s space.

How have you decided on the specific programming activities? Are there any projects you are particularly proud of?

The programming changes every season. I always ask the girls what activities they are interested in and what they would like to learn about. The majority of the programming and events are art- and place-based, but a few years back, we hosted a mother-daughter day where we made water catchment systems, which was fun. 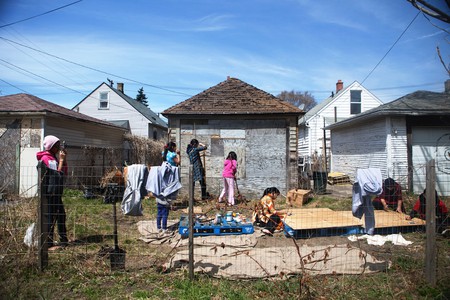 Outside of Women of Banglatown, what photography and educational projects have you worked on recently?

I recently published a story in The New York Times about Rohingya refugees living in Chicago. I spent nine months photographing the community and building relationships with refugees who had recently moved to America. I am also currently teaching a Youth Photography Exchange Program at Darkroom Detroit to young girls in Detroit and Kabul. Through images and video messages, the girls are communicating with one another to share the story of their cities.

For me, storytelling is a platform to reflect, share, and understand one another. For the past five years, the majority of my work has either documented or collaborated with underrepresented communities. The thread that ties everything together is to promote a greater understanding of individuals and communities.