The Best Luxury Hotels in Detroit 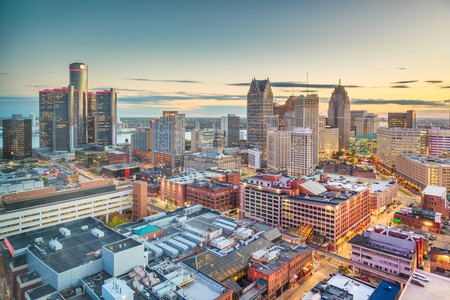 Known as Motor City, Detroit has the Motown and Henry Ford museums, the Detroit Institute of Arts and Comerica Park, and for baseball fans it’s the home of the Detroit Tigers. Many of the luxury hotels in this city, the largest in Michigan, are repurposed 19th and early 20th-century originals, from a former fire station to a seed warehouse. Here’s our pick. 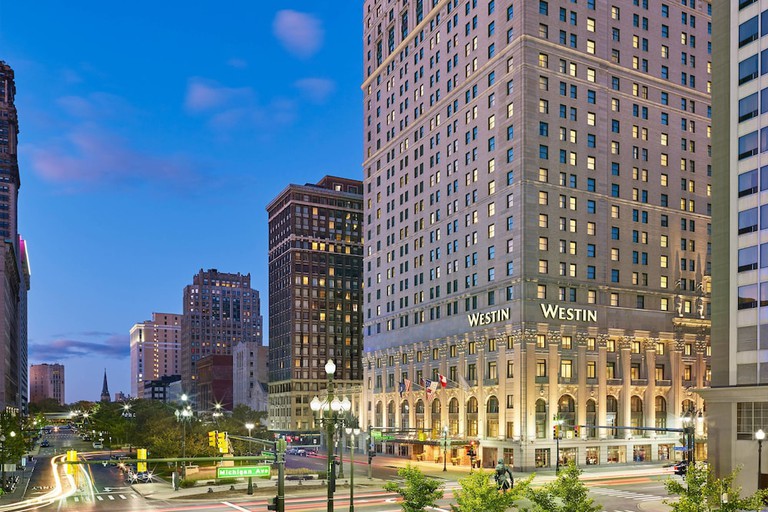 Courtesy of the Westin Book Cadillac Detroit / Expedia
View Rooms
From $248 per night per room
The Westin Book Cadillac is within walking distance of some of the most famous attractions in the city such as Comerica Park and Campius Martius Park. This renaissance-inspired building was once the tallest hotel in the world and was constructed in 1924 as part of an effort to turn Washington Avenue into the Fifth Avenue of the Midwest. Rooms feature the hotel’s own Westin Heavenly Beds, with 10 layers of bedding, and many have jacuzzi baths. The Motor Bar celebrates Detroit’s automotive heritage and serves contemporary cocktails such as the Bourbon Carrot Mule and Book Cadillac Last Word.
More info 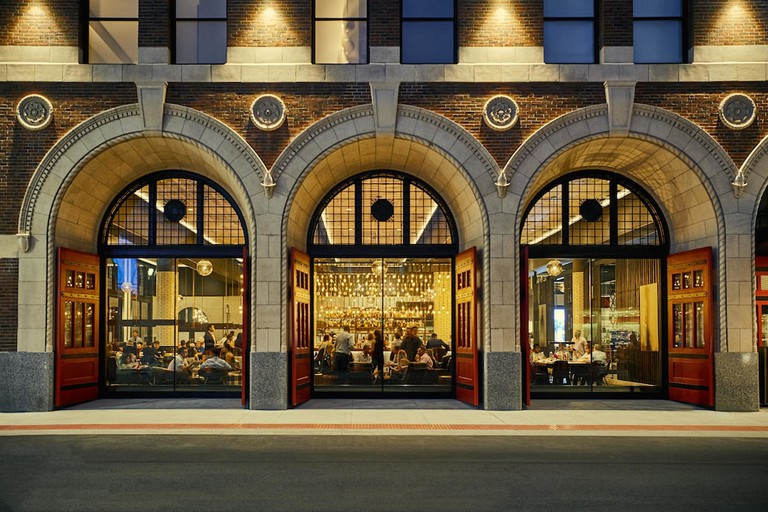 Courtesy of Detroit Foundation Hotel / Expedia
View Rooms
From $278 per night per room
Detroit Fire Hall is a symbol of Detroit’s rejuvenation in what was the city’s Fire Department headquarters built in 1929. From the denim vests of its bartenders to the chocolates in your room’s private bar, The Foundation makes a point of promoting Detroit designers, creators and food makers. The high-ceilinged Apparatus Room bar serves New American food made with Midwestern ingredients — try the slow cooked Utica Farm Pork Collar with braised red cabbage, mustard jus and apple slaw.
More info 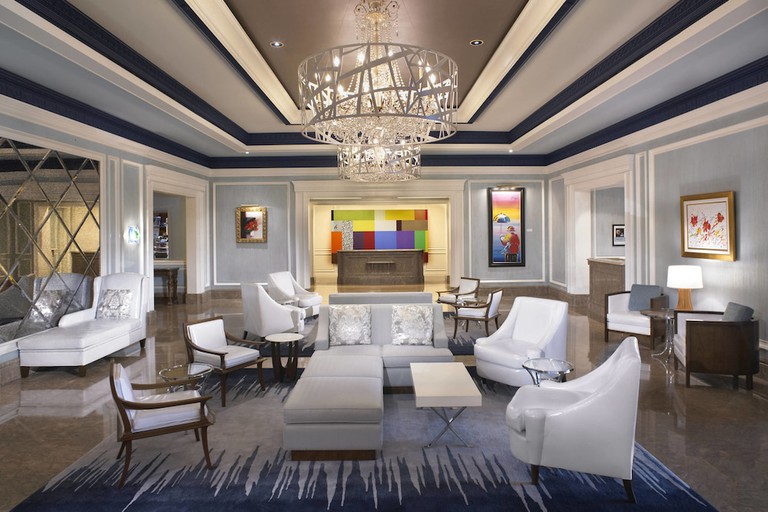 Courtesy of The Henry Hotel, Autograph Collection / Expedia
View Rooms
From $197 per night per room
The Henry Hotel is in Dearborn, a city in its own right which abuts the main body of Detroit to the west, and is named after Henry Dearborn, a revolutionary American soldier and statesman. Attractions linked to Detroit’s other famous Henry, Henry Ford, are in Dearborn, including Ford Motor Company HQ a mile from the hotel, and The Henry Ford Museum three miles away. The Henry Hotel boasts high-end furnishings and sharp service, with noteworthy art pieces throughout. Rooms have The Henry Bed, a mattress designed specially for the hotel by Lady Americana, and the views of the Detroit skyline and Ambassador Bridge are special.
More info 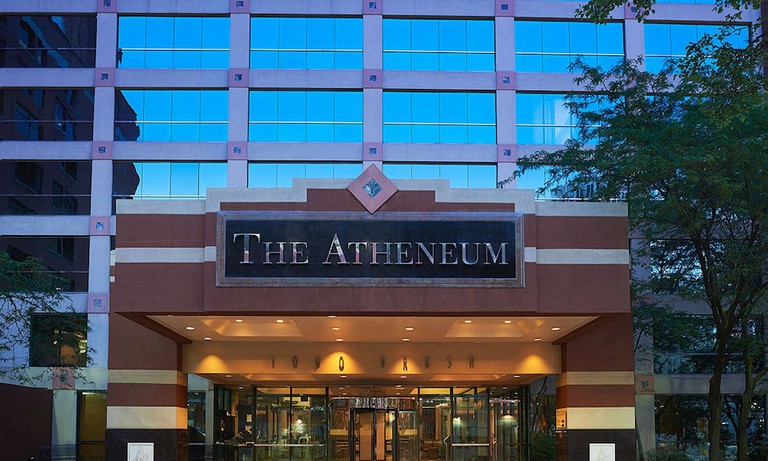 Courtesy of Atheneum Suite Hotel / Expedia
View Rooms
From $227 per night per room
A former seed warehouse, from a time in the late 19th century when Detroit was the capital of world seed production, Greektown’s Atheneum Hotel has columns and Greek-palace themes which do justice to its name. There are marble and deep soaking tubs in the bathrooms. The giant Greektown Casino is across the road if that’s your thing. Pegasus Taverna is part of the casino and is one of Greektown’s most popular restaurants – the Yuvetsake is not to be missed, an individually baked casserole of simmered lamb in tomato sauce with rosa marina with Kasseri cheese.
More info 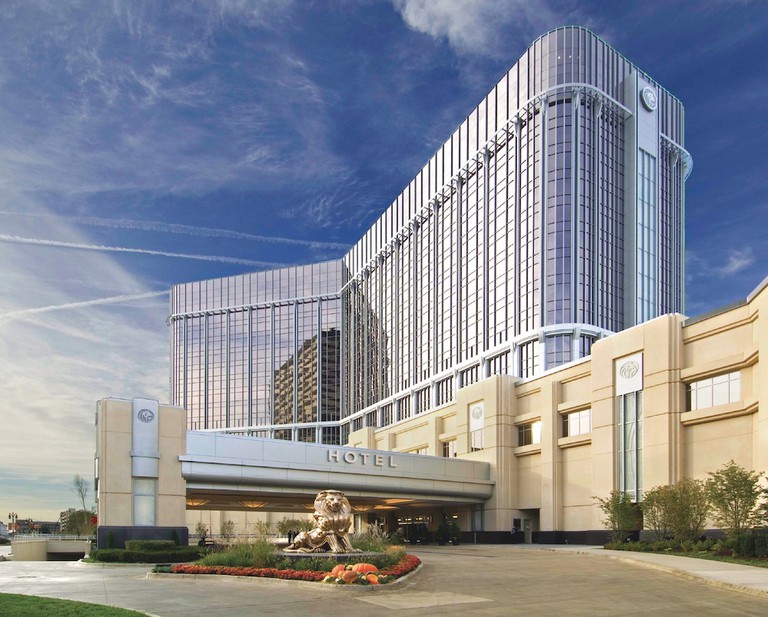 Courtesy of MGM Grand Detroit / Expedia
View Rooms
From $204 per night per room
This Vegas-style casino resort is for those who do not want a quiet time until they are back in their rooms. The MGM Grand Detroit is an entertainment complex as well as a hotel, and has a sports lounge, event center, virtual golf suite, seven restaurants, and the 32° frozen cocktail bar. The lobby ceilings are high enough to give you vertigo and there’s a mega-attentive concierge service. The 400 rooms feature oversized marble showers with dual rain heads.
More info 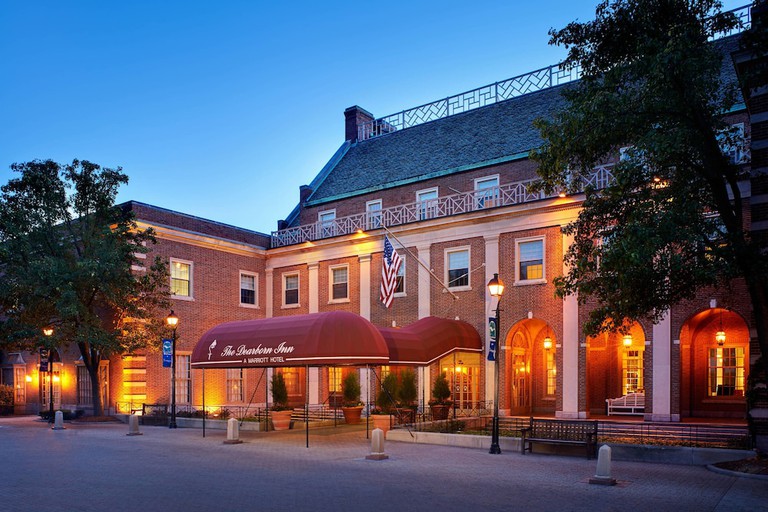 Courtesy of The Dearborn Inn, A Marriott Hotel / Expedia
View Rooms
From $177 per night per room
A stately home that was built in 1931 on the former Ford Motor Company site in Dearborn, the Dearborn Inn is surrounded by 23 acres (9ha) of landscaped grounds. There is also the option to stay in an old freestanding home. The Henry Ford museum is a just a five-minute drive away. Edison’s serves classic American fare overlooking the hotel’s grounds through large arched windows and you’ll get light fare and cocktails at Ten Eyck Tavern.
More info 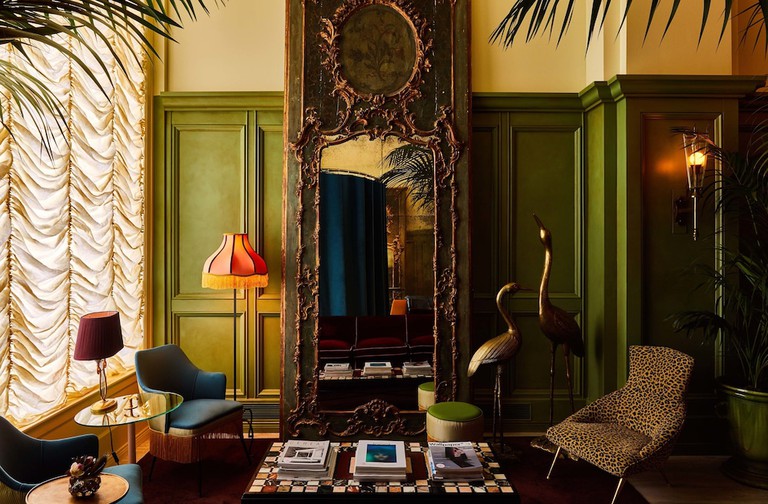 Courtesy of The Siren Hotel / Expedia
View Rooms
From $178 per night per room
The lobby of The Siren Hotel has become a cool hangout downtown thanks to fun design flourishes like brass storks and Rococo mirrors and its general air of vintage glamour. The rooms are colorful and intricately tiled, with great views of downtown. The Candy Bar is the height of hip cocktail drinking and is cozy yet extravagant. On the second floor is retro Karl’s diner – try the Wurlitzer Salad with chickpeas, tahini, red pepper, and cucumber, named after the Wurlitzer Building in which The Siren is located.
More info 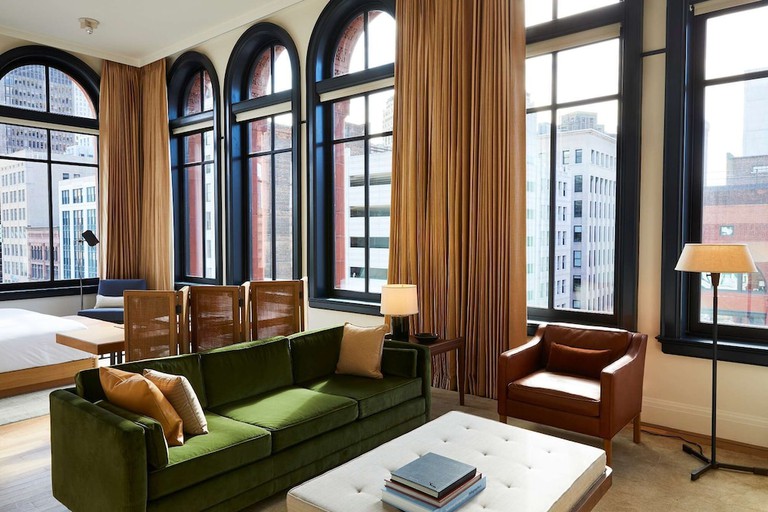 Courtesy of Shinola Hotel / Expedia
View Rooms
From $272 per night per room
With clean minimalist lines, downtown Shinola Hotel is a new breed of modern-retro hotels. Local artists’ contemporary works line the walls of the public areas. In your room, 8ft (2.4m) windows allow plenty of light in, best enjoyed while wrapped in a complimentary bath robe with Detroit emblazoned on the back. The hotel was born of the Detroit luxury design brand of the same name, founded as a watch company in 2011. There are handcrafted millwork and custom mattresses in the rooms and you can enjoy Southern Italian dishes at San Morello, or Detroit-style fried chicken and local brews at Penny Red’s and The Brakeman.
More info 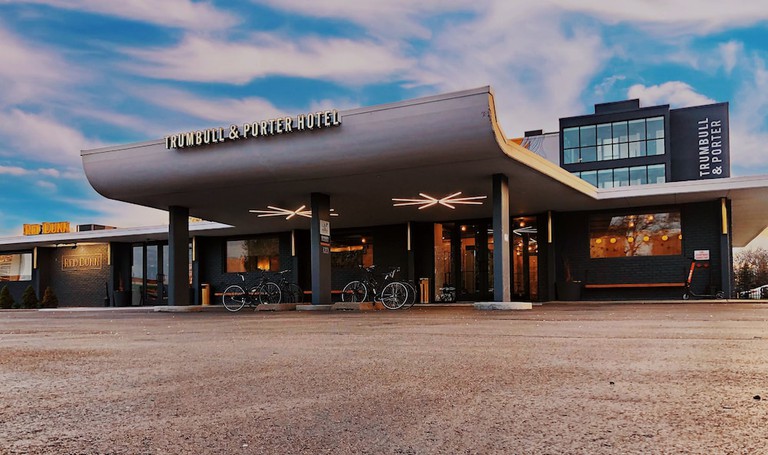 Courtesy of Trumbull and Porter Hotel / Expedia
View Rooms
From $150 per night per room
In the cool Corktown district, one mile west of downtown and away from the typical tourist spots, Trumbull & Porter is an arty, friendly hotel. There’s handmade furniture, poems on the walls and a huge mural on the front of the building. The restaurant serves classic American food with a modern twist – think gumbos, blackened shrimp and fried chicken.
More info

The Inn at 97 Winder 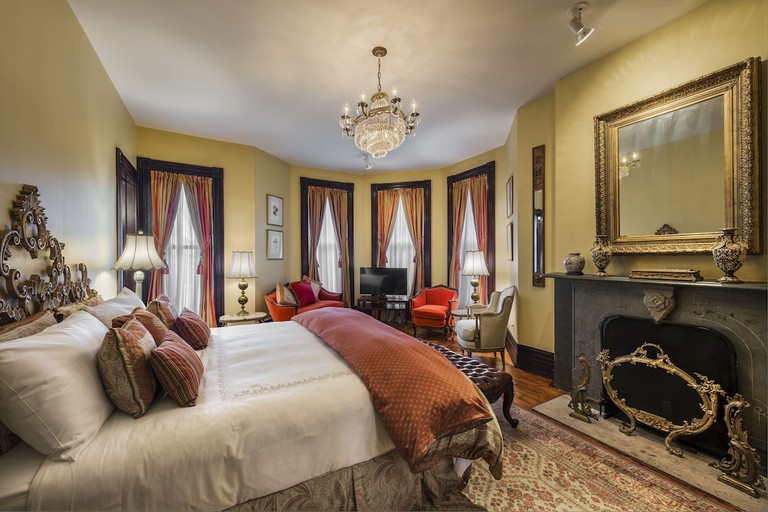 Courtesy of The Inn at 97 Winder / Expedia
View Rooms
From $201 per night per room
The Inn at 97 Winder is a Second Empire mansion built in 1876, red-bricked and imposing right in the heart of Detroit and handy for Comerica Park, Ford Field, Little Caesars Arena and the Fox Theatre. You have plenty of antiques, plush bedding and art from across the globe to enjoy in the 10 guest rooms, some of which have jacuzzi tubs. The British-style afternoon tea features finger sandwiches, up to six different kinds of tea and desserts from a local bakery partner.
More info 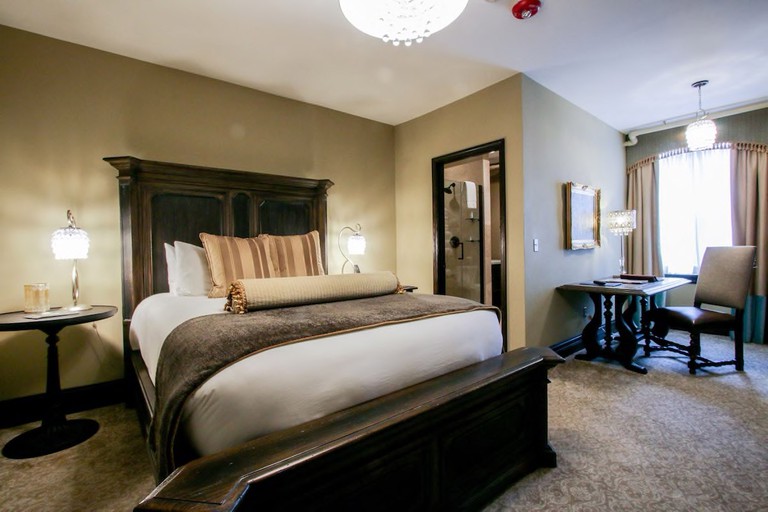 Courtesy of the Detroit Club-Hotel / Expedia
View Rooms
Unavailable for the next 3 months
Set in what was a businessman’s club from the early 20th century, in a Romanesque Revival-style building, the Detroit Club is now a fully converted and restored boutique hotel. You’ve Egyptian cotton and fine antiques in the 10 guest rooms, and it also boasts The Urlli Cigar Bar and the SOAK spa with a small basement pool.
More info
Give us feedback