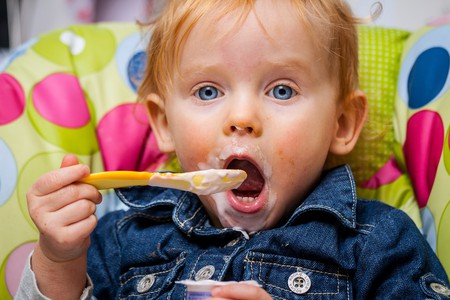 As home to Gerber Baby Foods, Fremont, Michigan, is in many ways the baby food capital of the U.S., if not the world. And for nearly 30 years, the town has been embracing and celebrating its most famous export with an annual festival dedicated to good old-fashioned family fun.

When Dorothy Gerber began making food for her baby Sally in 1927, her hard work gave her and her husband, Dan, an idea. Dan owned the Fremont Canning Company and realized that families all over the country could be spared the hard work if they used the factory to mass produce baby food. They officially started Gerber Baby Foods the following year, with Gerber becoming the first nationally advertised and sold baby food. It remains the market leader in the U.S., and though Nestlé acquired Gerber in 2007, its headquarters has never left Fremont.

Choice One Bank's Kid Expo is in full swing and going on until 2 pm downtown!! Come join us for fun and give always! #nbfffun

A post shared by National Baby Food Festival (@nationalbabyfoodfestival) on Jul 20, 2016 at 8:31am PDT

Fremont has had an annual festival since the 1950s, but in 1990, it became the National Baby Food Festival. For a week each July, the population of the small city grows from under 5,000 to over 50,000 as locals and visitors come together for family fun and baby-oriented activities. The mission of the festival organizers is to provide entertainment that celebrates and contributes to the culture and heritage of the Fremont area.

I'm going with the thought that he crawled really fast to get to his Mommy 🙋🏻…. not the Puffs and Lovie I was holding to lure him in. 🤣 #gerberbabyfoodfestival #loganjamesgrevious #gerberbabycrawl

Alongside multiple parades, musical performances, a craft fair, and sporting competitions for all ages, popular baby-themed events include the baby crawl race and baby photo contests, not to mention the adult baby food-eating contest. The festival takes place in the third week of July, with events happening across the city.