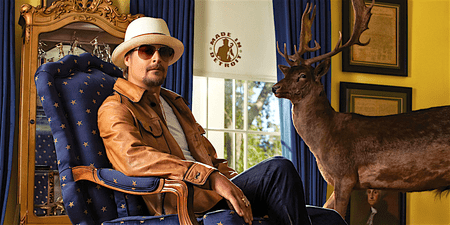 In a world where Donald Trump is President of the United States, it’s only natural that Kid Rock, aka the “early mornin’ stoned pimped,” holds one of Michigan’s Senate seats.

On Wednesday evening, Kid Rock, real name Robert Ritchie, preferred nickname”American Badass,” launched his campaign website KidRockForSenate.com after a few teasers on Twitter, and it’s impossible to tell if this is all a gimmick, or really what the difference between a gimmick and reality is anymore.

I have had a ton of emails and texts asking me if this website is real… https://t.co/RRVgISDFeq The answer is an absolute YES. pic.twitter.com/uYCUg6mjW1

Stay tuned, I will have a major announcement in the near future – Kid Rock

Let’s consider his website: There’s a photo of himself sitting in what he imagines his White House office will look like (you know he’s getting an office in the White House, right?): a looks-kind-of-comfortable-but-not-really chair covered in stars, a trophy case filled with all six of his baseball participation trophies, a portrait of George Washington strategically hung right where the wall meets the floor, a stuffed deer he did not shoot himself, and, of course, the self-proclaimed “rock ‘n’ roll Jesus” front and center, fedora on top.

Underneath this stunning photograph is the phrase “ARE YOU SCARED?” which, why would you ask that question, but, yeah, we’re not feeling too good about this whole situation, Bob. On the left is a link for merchandise that he probably commissioned one of his buddies to cook up in Paint, and on the right is a carousel of potential campaign slogans (“Pimp of the Nation”) and redneck platitudes (“Born Free”).

While Kid Rock running for office might come as a surprise to some, it seems like the “Bawitdaba” artist always knew he was destined for political office since the release of his first album, Grits Sandwiches for Breakfast. The record’s eighth track is titled “Pimp of the Nation”—wink, wink—which currently functions as one of his election slogans. In the first verse he raps:

In the second verse, he really just lays it all out, and, honestly, we should all feel like big dummies for not having seen it earlier. He even throws a fun nod to the Bush family, proving he’s always been part of the conservative inner circle.

Pimp of the Nation, I could be it
As a matter of a fact, I foresee it
But only pimping hoes with the big tush
While you be left pimping Barbra Bush

Then again, as Consequence of Sound notes, his campaign webstore is hosted on Warner Bros.’s website, so this all could just be an elaborate marketing scheme relating to a new album. However, if this is all real, Kid Rock will be taking on democrat incumbent Debbie Stabenow, and possibly fellow musician and Trump supporter Ted Nugent.