How an Artist, a Designer, and Plastic Bottles Could Improve Life in Flint 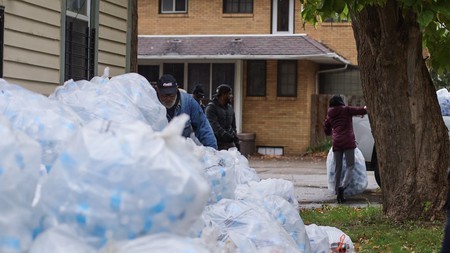 Flint made headlines on a global scale when a high concentration of lead was detected in the city’s drinking water starting in 2014. By 2016, the crisis was declared a federal state of emergency—but only after government officials systematically denied residents’ claims that the water was severely contaminated.

Our water isn’t clean yet. 💦 This is why water “jokes” are still highly offensive • This is why voting and politics is so important • This is why my city needs help NOW • This is why I speak so loudly about Flint because there are true and living soldiers there who need support and resolve ASAP • When will it end? 😡 • #FlintWaterCrisis

“Lead attacks the brain and central nervous system to cause coma, convulsions and even death,” according to the World Health Organization (WHO) fact sheet on lead poisoning and health. “Children who survive severe lead poisoning may be left with mental retardation and behavioural disorders.” While the severity of one’s symptoms is associated with the amount of lead ingested, the WHO ultimately states: “There is no known safe blood lead concentration.”

Flint’s water crisis caused more than irreparable health damage; it also made an example of the nation’s fundamental shortcomings. Not only did authorities dismiss the pleas of those whom they were instated to represent, those who suffered were mostly poor people of color. The occurrence drew particular attention to the extreme disparity present in heavily segregated American cities like Flint, with a troublesome 41.2% poverty rate.

Today, the Flint catastrophe is no longer breaking news—but artist Mel Chin has certainly not forgotten about it. On the contrary, Chin has invited socially conscious fashion designer Tracy Reese to collaborate on a new project called Flint Fit, through which locals will find opportunities for education, employment, and support. 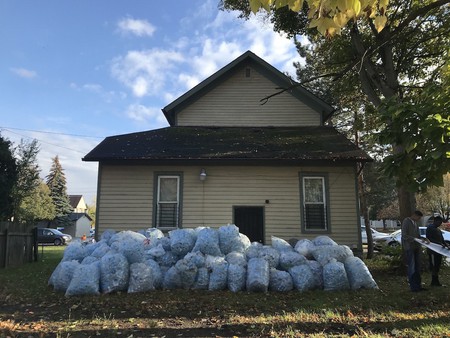 Fortuitously, Chin was in Flint for a different project when it dawned on him that the innumerable plastic bottles used to deliver fresh water to Flint residents could be repurposed; first, locals could be paid to collect the bottles, which could then be sent to a processing facility in North Carolina. There, a Greensboro-based company called Unifi would turn the plastic into polyester fabric, which would be sent back to Flint’s St. Luke N.E.W. Life Center, “a faith-based environment providing life skills, education and workplace training, empowering women and men to become self-sufficient,” according to the Center’s website.

The system would also create jobs for those who make clothes out of the converted fabric at St. Luke’s commercial sewing program, based upon designs created by Tracy Reese. The American fashion designer hails from Detroit, and gained widespread attention in 2012 when former First Lady Michelle Obama wore one of her dresses to the Democratic National Convention. 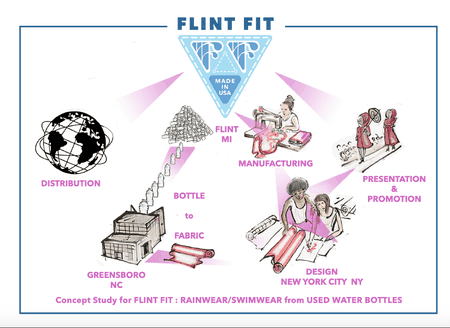 Concept study of Flint Fit | Courtesy of the artist

“When Mel came to us and I got to look through his vast portfolio of work—wow!” Reese reminisced to artnet News. “I saw how he’s committed himself to raising issues that need to be talked about and corrected, ecologically and in terms of human rights. I couldn’t help but be drawn in and get on board.”

Reese also noted her interest in learning from Chin, an activist who uses his creativity to garner awareness of pressing social, ecological, and political issues. The designer is like-minded; she has openly advocated for Planned Parenthood and women’s health in the fashion industry by working to feature models of all ages, ethnicities, and body types.

In April 2018, Flint Fit will feature in a multi-site exhibition titled Mel Chin: All Over the Place, hosted by the Queens Museum in New York City. It will be the first local presentation of Chin’s in more than 20 years.

Composed of drawings, paintings, sculptures, installations, videos, and public artworks, All Over the Place will be “organized around the thematic strands that have long preoccupied Chin’s thinking, including the natural environment, socioeconomic systems and injustice, the weight of lamentations as well as the lightness of humor to reveal truths,” the museum explains. It comes to New York in partnership with nonprofit art organization, No Longer Empty. 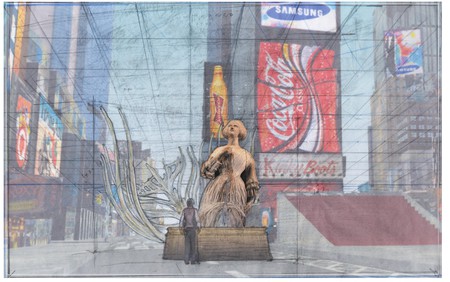 A study for Unmoored and Wake | Courtesy of the artist

“All Over the Place introduces two newly commissioned projects, Flint Fit and Unmoored,” informs the museum’s press release. “Unmoored (2017/18) is the artist’s first augmented reality (AR) project, situated in Times Square. It is an exploration of AR’s capacity to form unprecedented phenomena for mass public absorption, which will magnify climate scientists’ collective projection of a diluvian future.” Using the project’s downloadable app, passersby will be able to participate in the project.

All Over the Place will run from April 8 through August 12, 2018. The exhibition will be headquartered at the Queens Museum in New York City, though related sites will also include Times Square and the Broadway-Lafayette subway station in Soho.