Fashion Brands from Detroit You Need to Know 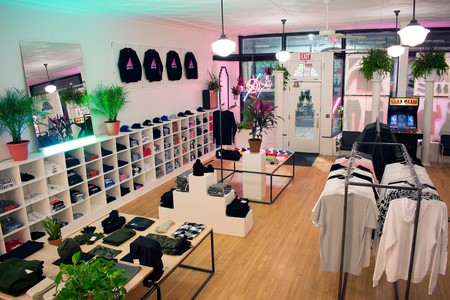 With plenty of space for manufacturing and retail, a creative population and fashion-hungry residents, Detroit has been growing as a fashion capital for a number of years. Here’s a rundown of some of the established and emerging Detroit-based artists, designers and labels to watch out for.

Possibly the most famous fashion brand currently associated with Motor City, Shinola was founded in 2011, with its headquarters and watch factory in the Alfred A. Taubman Building in New Center. It specializes in watches, bicycles, and leather, and its products quickly became much sought after, including by Barack Obama, who not only wears them but also gave former Prime Minister David Cameron a custom watch as a gift in 2016.

Three years ago today we opened our first #Detroit store at 441 W. Canfield.

Detroit is the New Black

After moving to Detroit in 2013, Roslyn Karamoko—a fashion graduate and former retail buyer—was so inspired by her new city that she began designing and selling clothes emblazoned with the slogan Detroit is the New Black to her friends and family. She soon opened a pop-up store and had her first permanent store by 2016. As the brand has gone from strength to strength, Roslyn has been named “The Motor City’s Hottest Designer” by TIME Magazine.

Another brand inspired by the attitude and originality of Detroit is SMPLFD, started by Justin Fishaw, Vincent Troia, and Andrew Davis in 2005. After selling exclusively online for a decade, they opened their first brick-and-mortar store on Gratiot Ave, in Eastern Market, in 2016. With a workshop in the basement and a host of parties, musical performances, and art and photography exhibitions under their belts, they’re aspiring to make it as much a music venue and art space as it is a clothing store.

Karissma Yve—a Detroit native and self-taught jeweler—founded XENOPHORA in 2013, and the success of her silver objects since has been such that they have featured during Paris Fashion Week and been sold at high-end concept stores, retailers, and galleries around the world. Her international success led to the opening of her first showroom in her hometown in 2017.

Because we all just want to be free • Actual Tears of Those Yearning For Liberation in .925 Sterling Silver.

A Wool Story is a sustainable textile studio created and operated by Meghan Navoy in Detroit since 2012. A graduate of the Fashion Institute of Technology in New York, Megan makes every item she sells by hand using recyclable materials in order to offer a sustainable alternative to mass-produced home and apparel items. Her pieces are sold online and at stores across the U.S., including three in the Detroit area.

Despite spending 20 years working in corporate America, Shelley Van Riper never forgot her fashion ambitions, having started her education as a fashion design major. And her constant searching for professional but stylish clothing eventually led to her idea for her own label, Alchemy Detroit, which she started in 2014. The range includes tees, jackets, and scarves for her and him, all manufactured in Michigan.

Be fierce, be brave, be you. Born in Detroit. Made in America. #authentic

Thank You for Everything

Detroit’s Thank You for Everything stands out due to its use of vintage textiles to create new and exciting clothing. The brainchild of lifelong Detroiter Torya Schoeniger, who previously ran the restaurants Good Girls Go To Paris Crepes and Rodin, every piece is unique, and the whole range is inspired by French films.

Details of the Wings of a Dove blouse. shopthankyou.com

The goal of Detroit’s Charing Cross is to offer an alternative to fast fashion by producing designs with soul and thoughtful craftsmanship. Founded by fashion designer and creative director Michelle Lobsinger, it has a store in Royal Oak that is open on Wednesdays or by appointment, and the range is available online.

Established in Detroit in 2016 by designer Alexandra Kennedy, ALXVNDRA is a leather accessories and womenswear label. She describes her products as “seductive, simple and substantial” for a striking yet fully functional collection, with many products displayed in artsy and provocative videos available online.

Soon to launch its first permanent storefront, artist and designer Margarita Barry has been making original products under the Bohomodern name since 2011. As well as selling clothing produced by her mother, a local seamstress, online and at pop-ups ever since, Barry, a Detroit native, wants her brand to be a source of inspiration for the city and its inhabitants.

Come see us today 3pm to 7pm in all of our pop-up glory at @MASHdetroit on Detroit's far east side! #popup #popupshop #Detroit #MASH #taketwo