A Single's Guide to Dating in Detroit, Michigan 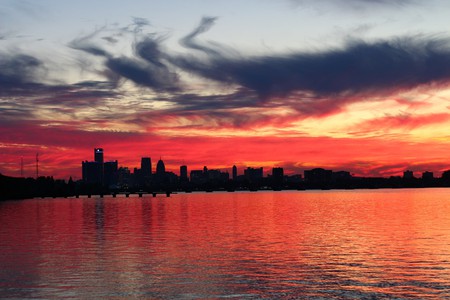 According to a recent study, Detroit has a higher percentage of singles than any other city in the US. But, despite its abundance of singles, it was also named one of the worst cities for dating. So, with plenty of people to meet but a poor dating scene, what can you do to find love in Motor City?

Every year, personal finance website WalletHub releases a list of the best US cities for singles, and over recent years, Detroit has not fared well. In 2017, despite having the highest percentage of singles of any of the 182 cities in the study, it was only rated the 147th best city for finding love. The study uses a number of key metrics around entertainment and economic factors, as well as the dating opportunities available to determine how easy, likely and affordable it is to date. Detroit scored poorly for all three areas, while the study also found Detroit was particularly bad for online dating, having the third-fewest online dating opportunities.

The League is FINALLY launching in #Detroit on November 6th! Follow @theleague on Instagram and tag a totally league-worthy friend that lives in any of our newest cities (Detroit, Nashville, Portland, Charlotte, Raleigh or Phoenix) for the chance to win a free 3-month League Membership AND guarantee your friend a spot in their city's founding class! 🎉 US residents only. No purchase necessary to enter. Contest ends on November 6th 2017 at 12:00PM PST. Winner will be selected and announced via Instagram Stories shortly after, so watch out!

Despite scoring so badly for online dating opportunities, Detroit has all the usual dating apps. Tinder, Bumble and OKCupid are all available, while the more exclusive, invitation-only dating app The League launched in late 2017 aimed at the city’s young professional crowd. However, just because the apps exist, doesn’t mean Detroiters use them.

For events specifically for singles, Meetup.com is a great resource, where you can meet new people during a variety of niche nights and activities.

Beautiful evening for a Volunteer Appreciation Cruise! Thanks to the Diamond Jack tours for taking us out and the volunteers for all their hard work! #detroitriverfront #dequindrecut #detroitriverwalk

A post shared by Detroit RiverFront Conservancy (@detroitriverfront) on Sep 28, 2017 at 4:43pm PDT

With a high proportion of singles out there, it’s seemingly only a matter of finding them. The best way to do that in Detroit is to be engaged with the city by joining a club, taking a class, volunteering in a community scheme, or by spending time in places where single people gather.

Sporting clubs including the Atwater Running Club and Detroit Bikes combine exercise and socializing, while cooking classes such as those at the Cornwall Bakery or Mirepoix Cooking School could also provide an opportunity for your own meet cute. Volunteering is another great way to meet people while giving back to the community, schemes like Forgotten Harvest and the Detroit RiverFront Conservancy are among the best in the city.

That being said, most people in Detroit meet in bars. The city has a dynamic nightlife encompassing a vast array of cool bars, chic restaurants and hip music venues and nightclubs, all frequented by the city’s singles. Depending on your tastes, great bars to meet people include cool cocktail bars like The Skip and The Oakland, impressive spots like Wright & Company and the Bad Luck Bar, and packed dive bars such as the Old Miami and Gusoline Alley.

Waiting for night to fall #detroit Photo by @originalmule