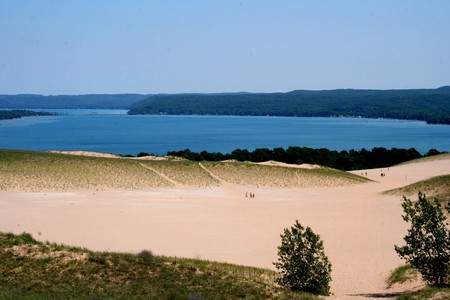 View of Glen Lake from the Dune Climb | © bengarrison / Flickr

The Sleeping Bear Dunes National Lakeshore is not only one of the points of pride of Michigan but also one of America’s most incredible areas of outstanding natural beauty.

Indeed, a 2011 nationwide poll by Good Morning America, which received over 100,000 public votes, named it “The Most Beautiful Place in America.” But what is so enchanting about it? How did it get its unusual name, and why should you drop everything and visit it immediately? Let’s find out.

Standing on the northwest coast of Michigan’s Lower Peninsula, Sleeping Bear Dunes is a 35-mile-long (56.3 kilometers) stretch of coastline and includes the North and South Manitou Islands. It became a national lakeshore in 1970, ensuring preservation and public access to its pristine sandy beaches, soaring bluffs, lush forests, and inland lakes.

The area’s name comes from the sleeping bear legend of the Native American Ojibwe (or Chippewa) tribe, who controlled much of Michigan, Wisconsin, and Minnesota in the 18th century. The story goes that a forest fire on the other side of Lake Michigan forced a mother bear and her two cubs to try to swim across the lake. When the mother reached the shore, she waited for her cubs on the top of a high bluff, but they never arrived. In recognition of her efforts, the Great Spirit Manitou created the Manitou Islands to mark the spots where the cubs were lost and a dune to honor their forever-watching mother. 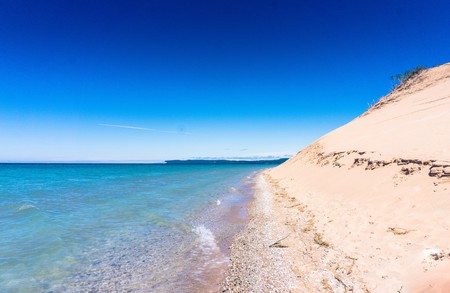 Sleeping Bear Dunes has since become one of Michigan’s most popular tourist destinations for day trips and camping holidays. Any visit should begin at the Philip A. Hart Visitor Center in Empire, to grab a permit and a map and to learn more about all the attractions it has to offer.

Recommended activities within the park include the Pierce Stocking Scenic Drive, which consists of a stunning overlook and a beautiful, tranquil beach at the bottom of a huge dune. Just remember that as fun as the run down is, it’s a long and strenuous climb back up. There’s also the Dune Climb itself, a slightly easier climb offering views of Glen Lake from the top. There’s also a trail from the dune that leads to Lake Michigan, though it takes several hours to get there and back, and hiking up and down the dunes is hard work.

View of Glen Lake from the Dune Climb | © bengarrison / Flickr

For bike fans, cycling the 22-mile (35.4-kilometer) Sleeping Bear Heritage Trail is a great way to explore the park and see some fantastic sights along the way. For watersports fans, there’s kayaking or canoeing on the Crystal River or Platte River, and for those even more adventurous, get a ferry over to the Manitou Islands for rugged wilderness and wildlife.

If all that isn’t enough, there are also lighthouses, coastal villages, ranger-led tours, museums, and wineries to check out, or you can find a pleasant spot on a beach and enjoy one of the country’s most beautiful areas.