A Brief History of the Leland Building 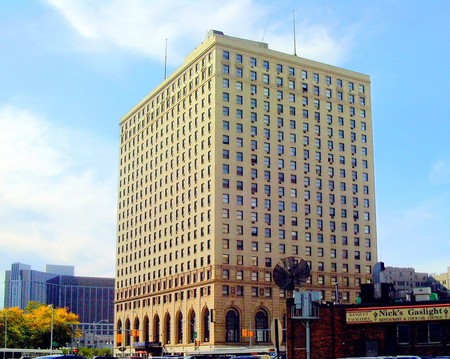 From its luxurious hotel beginnings to its steady decline and now its exciting redevelopment, the history of the Leland is a perfect analogy for that of Detroit. Its long and interesting life has included mobsters, banjo and German nightclubs, and several name changes – now this iconic building will live on as part of downtown Detroit’s renaissance.

The Leland was built in 1926 in area of the city that was on the up thanks to developments including the Michigan Theater. It opened in April 1927 as the Detroit-Leland Hotel, named for Henry M. Leland, the founder of Cadillac. Designed by Chicago architectural firm Rapp & Rapp, its Beaux-Arts style featured a terracotta and brick exterior, and 800 rooms with air conditioning – a rare luxury for the time. 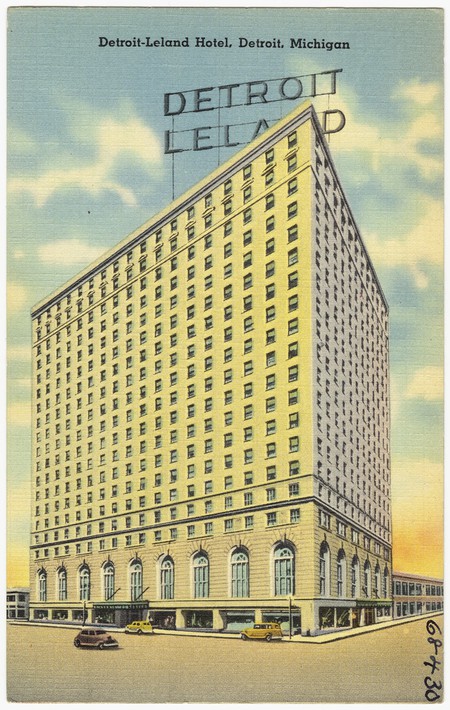 A postcard for the Detroit-Leland Hotel | © Boston Public Library / Flickr

Despite being a four-star hotel, almost from its opening it had a seedy reputation as a favorite haunt of the city’s mobsters, from notorious bootleggers the Purple Gang in the 1930s to infamous union leader Jimmy Hoffa – legend has it that when Hoffa went missing in 1975, the Leland was the first place the police looked for him. It also suffered a series of financial problems, being bankrupt throughout much of the 1930s and changing ownership a number of times. In 1966, the owners converted much of the hotel into apartments.

Since the 1960s it has also been famous for hosting a series of nightclubs. The bizarrely named Your Father’s Mustache, a banjo music club with an 1890s theme, opened in 1965, while in 1983 the glamorous ballroom became home to an industrial music club originally called the Lidernacht, or Night Song in German, which still runs today as the City Club. The building also contains Luci and Ethel’s, a 1950s-style diner.

After spending some time as a Ramada, it was added to the National Register of Historic Places in 2005 and returned to being the Leland when the city hosted the Super Bowl in 2006. Though it had become a budget hotel and eventually only catered to long-term guests, its lobby was restored to its original grandeur around this time.

In 2018, as part of a wave of projects in the area, plans for a $120 million renovation of the Leland were unveiled, with the hotel finally being converted into 339 apartments. The project is set to commence in 2018 and be finished in 2020.