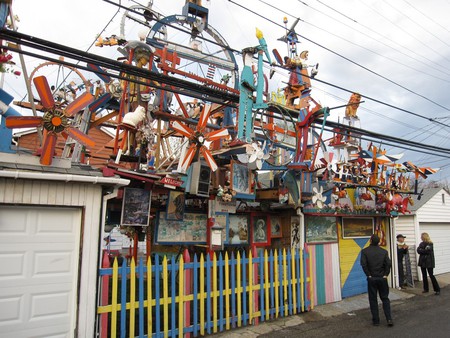 Everyone needs a hobby when they retire, and it doesn’t necessarily need to be golfing or knitting, as was proved by Detroit’s Dmytro Szylak, the man behind Hamtramck Disneyland.

After immigrating to America from Ukraine in the 1950s, Szylak spent 32 years working for General Motors. Upon retiring in the 1980s, he needed a hobby and was inspired to turn his backyard in Hamtramck into an art installation. He began handcrafting items and collecting found objects, and without much of a plan, he started building a structure from the ground up. Starting small, as he added more and more components, the sculpture soon took over the roofs of his two garages and spilled over into the alley behind. 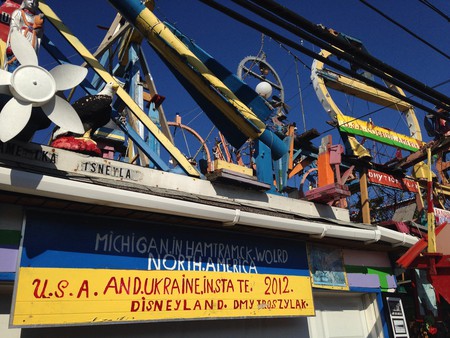 The playful collection drew on his own interpretation of Disneyland, as well as celebrating both his homeland and his adopted homeland. It follows a carnival theme, featuring a carousel, an aircraft, toys, rockets, propellers, soldiers, Christmas decorations, paintings, pictures and much more, as well as light, motion and sound elements. It rises high above the houses around it, and unsurprisingly, he met with resistance from neighbors and the city initially, though the work was soon recognized and celebrated.

He spent around 13 years adding to the structure, deciding it was finished around the turn of the millennium because there was no more room. Between then and his death in 2015 at the age of 92, he tended to the structure, repainting and repairing when necessary but not really adding or altering the mass of objects. 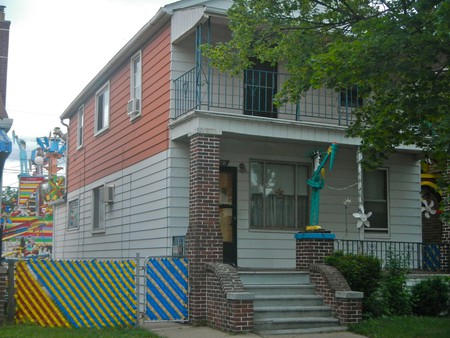 The view from Klinger Street | © PunkToad/Flickr

It has become one of the city’s top attractions, with thousands of visitors every year. Supermodel Kate Moss was even shot there by famed photographer Bruce Weber in 2006, while Szylak himself was honored by the Mayor of Hamtramck for his creation.

The future of the structure was in doubt after his death, but local art collective Hatch Art stepped in and raised funds to maintain it and honor Szylak’s work. They plan to hold events at the site and have a guide to better inform visitors about it.

The best place to view Hamtramck Disneyland is from the alley between Klinger and Sobieski Streets, north of Commor Avenue.