A Book Lover’s Guide to Detroit 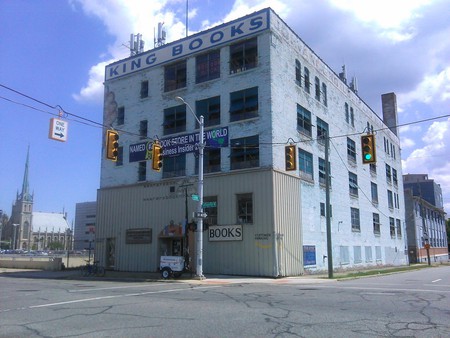 From great independent bookstores to a number of established literary festivals, Detroit has plenty to offer a book lover. Readings, events, and clubs are all available at stores ranging from small independents to John K. King Used & Rare Books, which has over one million titles, while annual festivals give you a chance to bargain hunt, meet authors, and connect with the community.

The year 2017 saw the first annual Detroit Festival of Books, and it will return in 2018 on Sunday, July 15th. Taking place at Eastern Market’s Shed 5, the festival is organized by the Book Club of Detroit and last year featured a number of local authors available to chat about their work and sign copies; a huge amount and variety of books for sale; and food, drink and music to top it all off.

Just outside Metro Detroit in Chelsea, Michigan, the Midwest Literary Walk is a literary event held annually on the last Saturday in April. Readings take place across a number of venues throughout the afternoon, and discounts are available to attendees at local bookshops, restaurants, and bars. The 10th Midwest Literary Walk will take place on April 28th.

Held each September in Ann Arbor, 2018’s Kerrytown BookFest will be the 16th time it has taken place. It was started to celebrate the city’s heritage in literary and printing arts and to showcase local individuals, businesses, and organizations. Panels of authors discussing all genres take place throughout the day, and 2017 had over 90 vendors to buy from.

Organized by Detroit Book City, an independent bookstore that specializes in African-American books, media, and events, the Juneteenth Books, Poetry & Arts Fair took place for the first time in 2017 and will return in 2018. Held at the Northwest Activities Center, the day will include self-published adult and children’s books, spoken word artists’ CDs, and handcrafted items, alongside storytelling and performances.

John K. King established his first bookstore in Dearborn in 1971 but soon outgrew it. To ensure that wouldn’t happen again, in 1983, he bought the abandoned, four-story Advance Glove factory building in downtown Detroit and converted it into John K. King Used & Rare Books. It now holds over one million books broken into 900 categories, including a large selection of rare books.

If you’ve got a little while to get lost in a bookstore, the Book Beat, open since 1982, is one of the best for that in Detroit. It specializes in art, photography, quality literature, and children’s books, and its selection is often so great that all the books cannot fit on the shelves. Knowledgeable staff and regular events complete the package.

Oh Book Beat, how I have missed thee

At the opposite end of the scale, Pages Bookshop has a relatively small but excellent range in its charming shop in Grandmont Rosedale. Susan Murphy, who hoped to bring the community together through author and discussion events, pop-ups, and workshops, opened the store in 2015. So far, so good, Susan.

I’m calling it a day. I hope you are sipping wine and reading a great book. #snowstorm #detroit #pagesbookshop #books

Over in Ann Arbor, Common Language Books is an independent, LGBT- and feminist-identified bookstore that has been serving the community since 1991. LGBT bookstores have become increasingly rare, and their selection of works on, by and for the LGBT community is unrivaled in the area.

Onto Detroit’s most famous books, and first up is Jeffrey Eugenides’s Middlesex, which won the Pulitzer Prize in 2003. It tells the story of a Greek-American immigrant family’s move to Detroit and their experiences in the city over a period of time, including the Prohibition era and the 1967 Detroit riots. The changing face of the city is one of the book’s key threads. Eugenides was born in Detroit and lived in Grosse Pointe like the family in the novel.

Published in 1954, Harriette Arnow’s The Dollmaker is the story of Gertie Nevels and her family’s migration from Kentucky to Detroit during World War II. It depicts the harsh realities of living and working in the industrial city during this time. Arnow herself was from Kentucky but spent significant periods of her life in Detroit.