9 Awesome Things to Do for Free in St. Louis 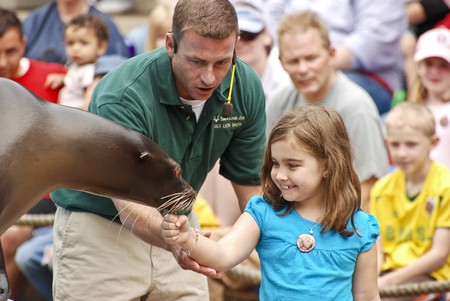 From Shakespeare to science and beer to barnyards, there’s more to do in St. Louis than the Gateway Arch. Did we mention that the activities are free?

Many people experience intense wanderlust that they feel they can’t satiate because of the expense. For these cash-strapped explorers, the Gateway to the West is the perfect destination; inexpensive lodging is readily available, the cost of a night out can be made more than manageable, and—perhaps best of all—many of the cultural experiences and activities have free admission. Here is just a sampling of the many wonderful free attractions St. Louis offers. 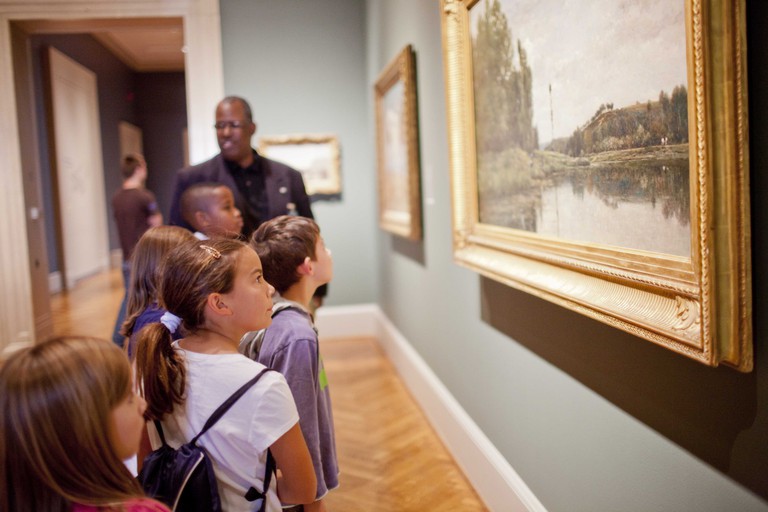 It’s incredible that the Saint Louis Art Museum (SLAM) offers free entry when you consider what’s inside; with about 33,000 works that span time and cultures, visitors get a dose of history, sociology, anthropology—the list goes on. Permanent collections include works from Africa, Europe, Islamic art, art of the Pacific Islands, Native American art, and much more. In the sculpture garden, patrons can walk the paths and observe how landscape design and master sculpture harmoniously combine. Select exhibitions and events might have a cost associated, but for the most part, your experience here is free.

PRACTICE YOUR OLD ENGLISH AT THE SHAKESPEARE FESTIVAL ST. LOUIS

Originally, the performance group, Shakespeare Festival St. Louis, put on a free play once a year in Forest Park for any and all who wanted to attend. The group has since expanded and now offers everything from Shakespeare in the Streets—a free performance that’s literally held on the streets in select neighborhoods, where the play has been adapted to address issues and concerns in the area—to their education tour, a performance for schools in which they adapt Shakespeare plays to address issues faced by teens. To catch any of the free street performances or the festival, check out their website.

Play with Dinosaurs at the Saint Louis Science Center 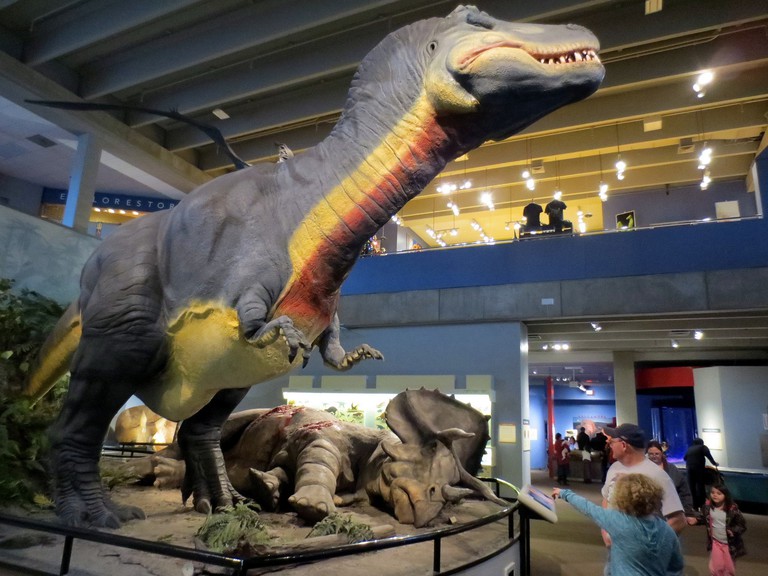 The iconic mechanical dinosaurs that greet you upon entering the Science Center are just an introduction to the amazement that awaits beyond. Select exhibits are ticketed, as is the OMNIMAX Theatre, but with more than 700 hands-on displays, where you can test the laws of physics, explore space, learn about weather and pollution, and more, grown-ups and kids alike are sure to be fascinated—for free—by what’s in store. 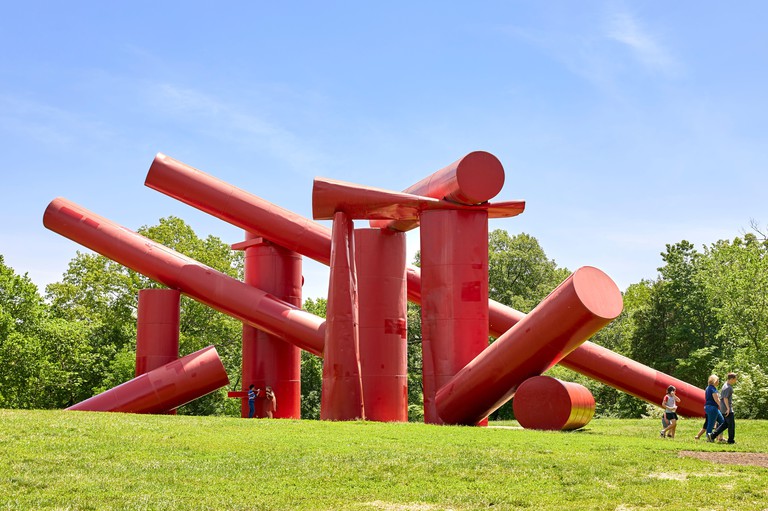 The Way Sculpture by Alexander Liberman in Laumeier Sculpture Park in St Louis, MO | © Simon Montgomery / Alamy Stock Photo
This 105-acre park was established in 1976. It was among the first sculpture parks in the country and remains one of the largest. The park aims to marry nature and art with approximately 60 large-scale outdoor sculptures, some of which are deemed “interactive” (in other words, feel free to touch, sit, climb, etc.). There are about two miles of trails (about three kilometers) that wind around the sculptures, along the creek, and through a wooded area. Feel free to bring your pup, and set up a picnic any time. Be sure to check out the events on offer throughout the year—many are either free or less than $10.

Ride a three-story slide at The Magic House

General admission to this enchanting museum is usually $11, but the fee is waived from 5:30–9 p.m. on the third Friday of every month for families with up to two adults and four children. Additionally, active duty U.S. military members and their immediate family always get in for free, as do foster families. Although officially a children’s museum, everyone’s eyes light up upon entering, no matter their age. Some favorites include the three-story slide, bubbles that are so big you can stand inside them, and an electrically-charged ball that makes your hair stand on end when you touch it. As you can likely tell, photo opportunities abound here.

Roar with the Tigers at the St. Louis Zoo

As it’s consistently ranked among the top zoos in the country, the Saint Louis Zoo is a point of pride for locals, many of whom make regular visits themselves. From the interactive exhibits, to the many shows and demonstrations, it’s hard to believe that admission has always been, and likely will always be, completely free. Some of the shows and attractions are ticketed, but prices are often kept to $5 or less; if you get there right when the zoo opens, many of these are also free for the first hour. The zoo also offers many free after-hour events, including the Jungle Boogie concert series.

St. Louis is home to many breweries of varying sizes, but there are two that give exceptional—and free—tours, both of which include tastings at the end for the 21 and older crowd. Anheuser-Busch was founded in St. Louis in 1876 and has been a fixture in the city ever since. The tour includes an inside look at the facility, a visit to the Clydesdales, and insight into their brewing procedures and process. For a more intimate tour, with just 20 people or less, visit Schlafly Bottleworks every Friday afternoon. Schlafly was established in 1991 and was at the forefront of the craft brewing movement. They emerged from the shadow of their very successful and much older competitor to become an equally beloved city staple. Learn more about the general history of beer in the city and Schlafly’s own history and brewing process.

Pet some puppies at Purina Farms

This is one of the top spots for pet lovers of all ages, with a baby-animal petting area, twice daily cow-milking demonstrations, an animal barnyard and play loft area (with chicks, piglets, and baby rabbits that visitors can pet), canine agility shows—and we haven’t even gotten to the part where you can pet puppies and kittens to your heart’s content. And, yes, it’s all free. There are also wagon rides, interactive exhibits, and, to top it off, visitors are welcome to bring their dogs.

Frolic at the Missouri Botanical Garden 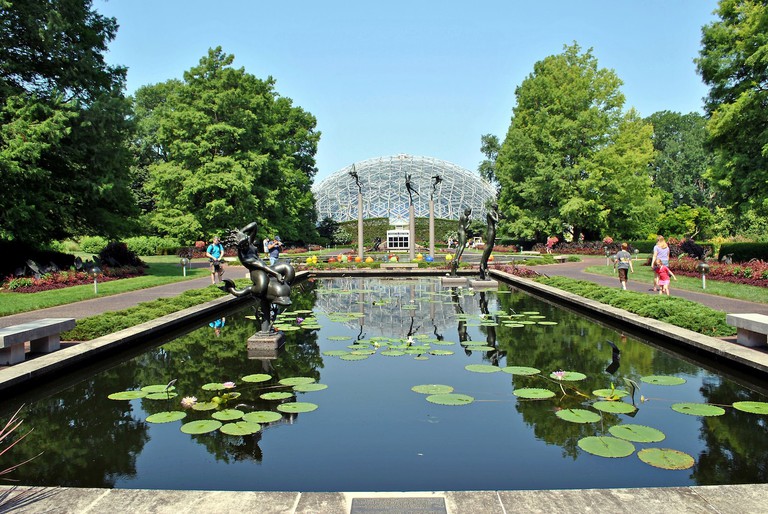 Usually, garden admission is only free for those younger than 12. For everyone else, it costs $12. However, the garden extends their hours to host the Whitaker Music Festival, a series of free outdoor concerts held every Wednesday in the summer. On these nights, admission to the gardens is free after 5 p.m. The concert doesn’t start until 7 p.m., so if you don’t mind not being close to the stage, you’ll have plenty of time to roam the grounds and take in the acclaimed Japanese Garden, the English Garden, the Victoria District, and other horticultural displays. Additionally, St. Louis city and county residents get free admission every Saturday between 9 a.m. and noon.