7 Detroit Festivals You Have to Experience 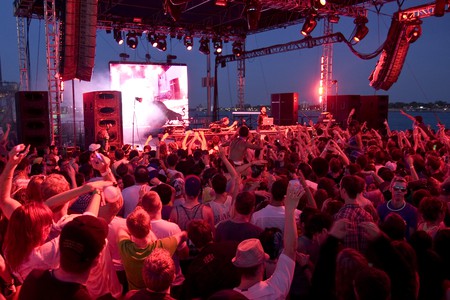 Detroit is a city that knows how to have fun, and at no time is that more apparent than during one of its many annual festivals. Music, art, food and drink are all just excuses to get together, have a good time and recognize the wonderful city itself. Here are the best events to watch out for.

Dally in the Alley

Detroit’s largest annual community festival took place for the 40th time in 2017, once again organized entirely by volunteers from the North Cass Community Union. The Dally in the Alley street festival, one of the city’s longest running events, takes over a whole city block in the Cass Corridor area on the Saturday after labor day, celebrating Detroit with local music, art, food, beer, and vendors selling all kinds of merch. Drawing upwards of 80,000 people makes for a buzzing yet hectic atmosphere.

Head to Detroit over the labor day weekend and you’ll be able to catch more than 60 live performances from some of the hottest names in jazz at Detroit Jazz Festival, all without paying a penny. The world’s largest free jazz festival fills Hart Plaza and Campus Martius for three whole days, with multiple stages and late night jam sessions to check out. It’s nearly 40 years old and shows no sign of slowing down. No tickets, no queues, just good times.

First post! The @detroitjazzfest is #instagram official! . We’re counting down the days (216 to be exact) until #jazz lovers from around the world again unite for the @detroitjazzfest, now 39 years strong and the world’s largest free jazz festival! Stay tuned for info on upcoming festival-sponsored events!💪🏻 🎺 🎸 🎤 #djf18 #detroitjazzfest #fridaymood

Considered one of the best events of its kind in the country, the Movement festival is an annual celebration of electronic music, specifically techno, which was of course created in Detroit. After launching as a free festival in 2000, it underwent several name, date and location changes, but it has been consistently held in Hart Plaza over Memorial Day weekend for the last decade. Fives stages host almost 100 acts from Saturday to Monday, and tickets are around $200.

Mo Pop is a relative newcomer on the Motor City festival scene. The music festival was put on for the first time in 2013 as a single day event in Sterling Heights, but has grown steadily since and moved to West Riverfront Park in 2015. Now held over two days, some of the top names in indie-rock, pop and hip-hop have played in recent years, and 2018 will see Bon Iver, The National and Portugal. The Man headline. Tickets can be snapped up for around $100.

Too early to start the countdown? We think not – Only 21 Saturdays Away! ☀️ Limited Early Bird Tickets and 4-Packs Available Now 📷 @homieswithhanford

If jazz isn’t your thing but you’re looking for a fun labor day weekend, Royal Oak’s Arts, Beats & Eats festival has something for everyone. As the name suggests, you can expect a art show, over 200 musical performances across nine stages, and food from some of the city’s best restaurants. 2017’s event saw over 390,000 visitors, raising more than $350,000 for local charities.

First day of Spring means we are that much closer to Arts Beats & Eats and has us thinking about our happy place! #InternationalDayOfHappiness

Detroit’s longstanding tradition of innovation in design has been celebrated annually at the week-long Detroit Design Festival for the last seven years, during which time the city received the prestigious UNESCO City of Design title (the only US city to have done so). For 2018, the event is transitioning into a month-long series of cross-disciplinary events at venues in all corners of the city, with September officially becoming Detroit Month of Design.

The Detroit Design Festival has expanded to honoring the entire month of September as Detroit Month of Design! Applications ARE NOW OPEN through April 16th. Get to planning your great ideas because there are eight ways to get involved. #DetroitMoD #detroitcityofdesign

Taking place at venues across the small city that gives the festival its name, the Hamtramck Music Festival goes down every March, with over 160 bands crashing 21 of Hamtramck’s best bars. A mix of family-friendly daytime and late night 18 and above shows happen over three nights, with a $10 wristband giving you access to it all. Venues include Ant Hall, Small’s and Whiskey in the Jar.