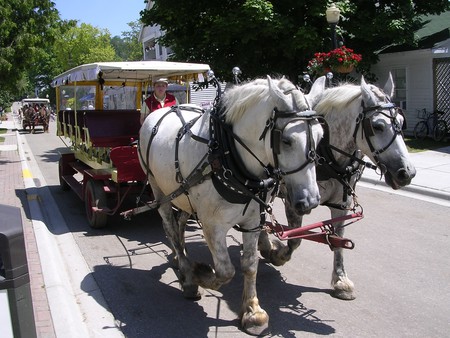 In the Straits of Mackinac between Michigan’s Lower and Upper Peninsulas stands Mackinac Island (pronounced mac-in-aw), a quaint paradise where much of life has remained as it was in the 19th century when it first became a summer holiday destination.

Tourists who are looking to enjoy fudge, fascinating history and idyllic scenery flock to the island each year, increasing its population from less than 500 up to 15,000 at a time. These are our top reasons to visit an island so special that the whole thing is even a National Historic Landmark.

There are no cars…

In 1898, the still relatively new automobile was permanently banned from Mackinac Island in order to encourage tourism, and that rule has remained in place ever since. The peace and quiet and clean air of a carless island are some of its most special qualities. 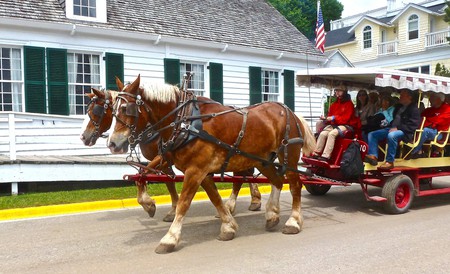 …so take a horse

Travel around the island is by foot, bicycle or the most popular option, by horse. Mackinac Island Carriage Tours offers both horse-drawn taxi cabs and carriage tours. There are also stables like Cindy’s Riding Stable where visitors can rent horses if they fancy exploring the island on horseback.

If partaking in a horse and carriage tour of the island alone isn’t enough to take you back in time, it has many historic sites and museums to discover. You can learn about local history at the Stuart House City Museum or the Benjamin Blacksmith Shop, and tour the restored keeper’s quarters at Old Mackinac Point Lighthouse.

See some of the oldest houses in Michigan

The island has the oldest surviving church building in Michigan and one of the country’s oldest active butterfly houses. There’s also the Biddle House, one of the oldest houses in the state, which was built in the 18th century and is now a preserved example of a prosperous home during the fur-trade era.

Due to its position, the island played a significant role in the early North American fur trade and as such was battled over a number of times. One of its historic forts, Fort Mackinac, was built by the British in 1780 and has been perfectly preserved. Alongside daily reenactments, you can learn about the region’s history from its costumed guides. The other fort, Fort Holmes, dates back to 1817 and is free to explore. 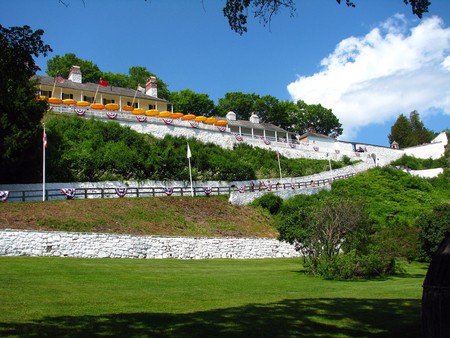 Every morning between June and October, you have the opportunity to help clean, load, prime and fire the first cannon volley of the day at Fort Mackinac—a pretty rare opportunity. The price also gives you access to the Fort and a souvenir military cap.

Fudge is the island’s most popular souvenir (apparently more than 10,000 pounds of fudge leave the island every day) and one of its oldest traditions, with some of its fudge stores dating back to the 19th century. Murdick’s Fudge and Sander’s Candy are the oldest, but Detroit News has voted Ryba’s Fudge Shop the best in recent years. It hosts an annual fudge festival in August.

The whole island is only 3.8 square miles (9.8 square kilometers), and cycling the eight-mile (12.8-kilometer) shoreline highway is a perfect way to enjoy its beautiful scenery in an active way. Bikes can be brought over on the ferry and are available to rent from Mackinac Cycle, which is on your right when you leave the ferry terminal.

One of the highlights of traversing the shoreline highway is seeing Arch Rock, the island’s most famous natural rock formation. The towering 150-foot-high (45.7 meters) limestone arch is visible from the highway by looking up, or a number of trails can lead closer for a better view. 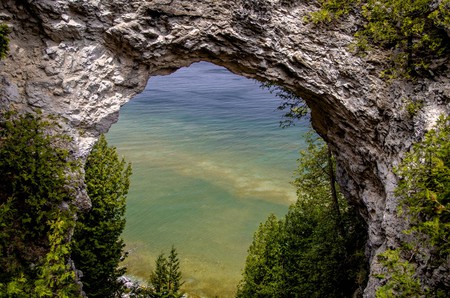 The majority of the island is Mackinac Island State Park, Michigan’s oldest state park. Despite its small size, it has 70.5 miles (113.4 kilometers) of signed and interpreted roads and trails to hike. Look out for 50 interpretive panels describing the natural wonders and historic locations.

Stay at the luxurious Grand Hotel

Offering appropriate old-world hospitality and charm, the historic Grand Hotel is the place to stay on the island. It opened in 1887 just as the island’s reputation as a summer getaway was taking off, and has become a National Historic Landmark. It was famously featured in the 1980 film Somewhere in Time and is also home to the world’s longest front porch, which is 660 feet (201.1 meters) from end to end.

The island has held a 10-day celebration of its blooming lilacs every June since 1949. The Mackinac Island Lilac Festival is its largest summer celebration, featuring a 10k run, a parade, a dog and pony show, concerts, wine tastings and culinary events, not to mention the crowning of the festival queen and court.

Many of the island’s visitors are there on day trips, and as night draws in and the last ferries depart, the remaining guests get to experience an entirely different atmosphere. The downtown area has many bars and restaurants with a wide variety of entertainment and dining options, but not much else beats taking a late-night stroll or carriage ride and enjoying the tranquility of the peaceful island.